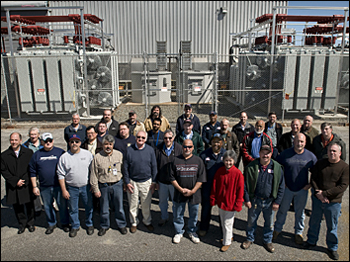 The Alternating Gradient Synchrotron (AGS), the Lab's oldest accelerator, received an upgrade recently when its main power supply transformers were replaced during the past year, while the Relativistic Heavy Ion Collider (RHIC) was offline. The original 40-year-old power transformers were reaching the end of their useful life, and neither the AGS nor RHIC could run without them.

Another reason for their replacement was to reduce the disruption of the electric current, or 'ripple,' that RHIC experiences. The four new transformers were built to reduce the large ripple effect, which in turn mitigates the loss of polarized protons that are studied at RHIC.

Lab physicist Haixin Huang explained that the amount of proton polarization is higher this year, increasing consistency of the proton sample studied at RHIC. Since the ripple affects the magnetic field in the AGS, it also affects the polarization of protons in RHIC. Huang's group is continuing to look for ways to increase the polarization.

You can understand ripple by using your hands. Place your palms together, and spread your fingers, making sure that each finger is aligned with its partner. Your fingertips represent the peaks, or surges, of the electric current. The valleys in the current are represented by the area where the bases of your fingers meet. Notice that the distance between the peaks and valleys is high, at roughly the length of your finger.

To understand the reduced ripple attained by the upgraded transformers, shift your hands so that your fingers are no longer in line with each other. You can see that there are twice as many peaks and valleys, but the distance between them is shorter, about half the length of your finger. Conceptually, this is how the new transformers change the ripple voltage at the AGS.

"Instead, we have a motor generator set which buffers our pulsating load from the grid line." he said. "The instantaneous power needed to pulse the ring is taken from the energy stored in the rotating mass of the generator, and LIPA only has to supply the average power dissipated in the system."

The project, which was successfully completed under budget, cost approximately $3.6 million.

Sandberg said, "The nicest thing for me was how well everyone chipped in and got things working, how all the trades worked together, and how smoothly we completed this project."

The installation process was more than a swapping of identical transformer units; the electrical bus work was very different between the old and new transformers. The new bushings, which insulate high-voltage conductors, are on the top of the units, while the ones of the older transformers were on the sides.

Additionally, the 13-inch deep concrete foundations that supported the old transformers had to be removed by crane (see photo) and replaced with blocks nearly double in depth to support the increased weight of the new transformers. This was all completed with the help of the Plant Engineering Division shops and the Tower Line Crew.

The rigging, lifting, and placement of the massive transformers was directed by CAD's Alexander Pendzick and supervised by Alex Korol of Plant Engineering.

Thanks to all who contributed to this project from CAD, the Plant Engineering Division, and Central Fabrication Services, the transformers have been up and running since January, and RHIC scientists were able to begin RHIC run 2009 in February.