Physicists working at the Relativistic Heavy Ion Collider (RHIC) are exploring the puzzle of proton spin as they begin taking data during the 2009 RHIC run. For the first time, RHIC is running at a record energy of 500 giga-electron volts (GeV) per collision, more than double the previous runs in which polarized proton beams collided at 200 GeV. 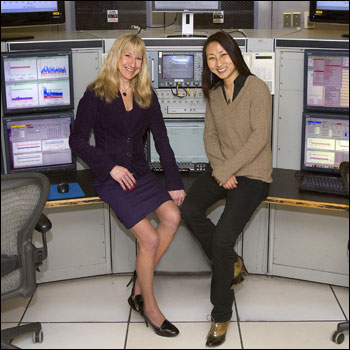 Steven Vigdor, Associate Laboratory Director for Nuclear and Particle Physics, said, "Physicists are interested in this higher energy because they can make measurements of polarized proton spin over an extended range of momentum of the quarks and gluons inside the proton. In particular, RIKEN physicists are interested in it because it will help them to meet a performance milestone they set for 2011 - the first measurements of W boson production in polarized proton collisions."

W bosons are massive subatomic particles that can only be produced with interesting rates at the new RHIC energy range of 500 GeV. Vigdor explained that finding these particles would provide insight into the spin preferences of "sea quarks," which are quark-anti-quark pairs that pop into and out of existence in protons. In addition to three regular quarks that are always present in protons, and to the abundant gluons that have been the primary target of RHIC polarized proton runs to date, these effervescent sea quarks make up the proton structure.

Physicists have long wondered why the overall spin of a proton cannot be accounted for by summing the spin preferences of its component quarks and antiquarks. Experiments have shown that these quarks and antiquarks combine to account for only 20-30 percent of the proton's spin. One view is that gluons account for the missing spin, a theory that is being tested at RHIC. With the higher energy polarized proton run, the PHENIX and STAR experiments will begin to determine in detail how sea quarks contribute to proton spin, while also sampling the gluon spin contribution at lower momenta than have been previously accessible.

RHIC is expected to run until at least mid-April, but if Congress passes the Omnibus bill, it will run until the end of June. To prepare for this run, RHIC operations personnel have been working around the clock to make several significant improvements to the accelerator. 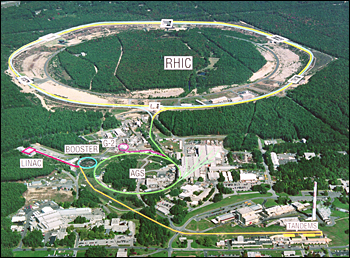 A diagram of the Relativistic Heavy Ion Collider (RHIC) complex at Brookhaven National Laboratory. The complex is composed of several accelerator facilities "chained" together to provide beams which are collided in detectors located inside the RHIC ring.

"It typically takes three weeks to get RHIC set up and ready for experiments," said the Collider-Accelerator Department's Fulvia Pilat, head of RHIC operations. "We started cooling down the machine to 4 kelvins on February 2, and then got beams circulating a week later. By the third week, the beams were colliding. Physics production starts soon afterwards."

Data are taken continuously, interrupted only for beam development or beam experiments to improve RHIC's performance or for machine maintenance. More than 1,000 physicists from around the world participate in RHIC data-taking and analysis, and about 350 operations personnel keep RHIC running at its optimum capacity.

"We have operations personnel working 24-hours-per-day, seven-days-per-week in the main control room and at the RHIC site," Pilat said. "We also have a coordinator for every RHIC run who oversees the run and is responsible for delivering the machine performance that is agreed upon for experiments. This year, Mei Bai [C-AD] is the run coordinator, and she is basically on call all the time."

For this run, RHIC has an upgraded polarimeter to measure the degree of polarization - that is, the extent to which protons are all spinning in the same direction. It is this spin-alignment that allows scientists to tease out the factors that contribute to overall proton spin. The polarized proton injectors have also been improved to deliver or exceed a polarization of 60 percent. In addition, a new transverse stochastic cooling system increases the rate of particle collisions. For more information on the stochastic cooling system, see: http://www.bnl.gov/bnlweb/pubaf/pr/PR_display.asp?prID=08-09.