Problems in the Uranium Bioremediation Avenue 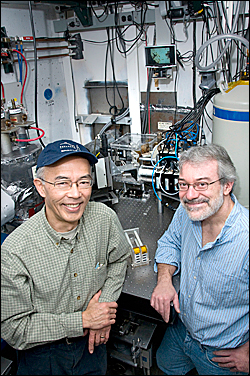 Toxic uranium is often found in soil and groundwater in places where uranium was either mined or enriched to make nuclear fuel and weapons. Uranium contamination, which is a threat to wildlife and water supplies and can cause kidney damage and cancer in humans, is especially problematic because it takes billions of years to decay radioactively. In addition, traditional clean-up methods involving pumping of contaminated water are useless against uranium because it sticks to soil. So finding a treatment option that is both efficient and cost-effective is tricky. To help narrow the search, a team of researchers obtained data partially collected at the NSLS to question a popular potential bioremediation method involving the infusion of organic carbon.

"We want to find a way to immobilize uranium in contaminated groundwater so it doesn't move around," said Tetsu Tokunaga, a researcher from Lawrence Berkeley National Laboratory. "However, some of our earlier work has shown that this can be problematic."

Using uranium-contaminated sediments from Oak Ridge National Laboratory, Tokunaga and colleagues from Lawrence Berkeley, the University of California, the University of Chicago and the Savannah River Ecology Laboratory previously studied the effect of adding various levels of organic carbon to samples. Organic carbon serves as an electron donor, which encourages the reduction of uranium (toward the tetravalent state).

Their results were surprising: While rapid reduction of U(VI) to U(IV) occurred in the first 80 days, shortly afterward, the uranium started reoxidizing back to its hexavalent state.

"We found that in the short run, if you succeed in getting uranium to reduce, it has a tendency to reoxidize even when reducing conditions are maintained," Tokunaga said.

The researchers guessed that this reoxidation could be due to one of the other predominant elements coexisting in the contaminated samples - iron or manganese. The challenge for the team in the most recent study was to determine the true reoxidizing culprit.

First, sediment samples were collected from a location close to where the original sampling occurred. Then, while treating the samples with varying amounts of organic carbon, scientists used micro-x-ray absorption near-edge spectroscopy at the Advanced Photon Source and NSLS beamline X26A to determine the oxidation states of uranium, iron, and manganese in real time. The data showed that as the uranium switched to its tetravalent state under the influence of organic carbon, manganese also reduced quickly and completely while most of the iron remained in its Fe(III) state - evidence that it's the likely reoxidizing agent.

In addition, the researchers learned that the amount of organic carbon used makes a difference in the reduction process.

"Beforehand, the general thinking was that the more organic carbon in solution, the better," Tokunaga said. "But in reality, the oxidation of organic carbon generates a proportional amount of bicarbonate, which actually brings uranium back into the water. There's an optimum level of organic carbon that works best for the overall process."

The latest findings, published in Environmental Science & Technology, further show that trying to stabilize uranium through organic carbon reduction is not ideal, Tokunaga said, adding that in the future, the group will explore other more sustainable uranium stabilization methods.

Other authors include Jiamin Wan and Yongman Kim, Lawrence Berkeley National Laboratory; Steve Sutton, Matthew Newville, and Antonio Lanzirotti, University of Chicago; and William Rao, University of Georgia. Microbiological aspects of this work (presented in other publications) were conducted by Rebecca Daly and Mary Firestone, University of California; and Eoin Brodie and Tery Hazen, Lawrence Berkeley. Funding was provided by the Office of Basic Energy Sciences and the Office of Biological and Environmental Research within the U.S. Department of Energy's Office of Science.