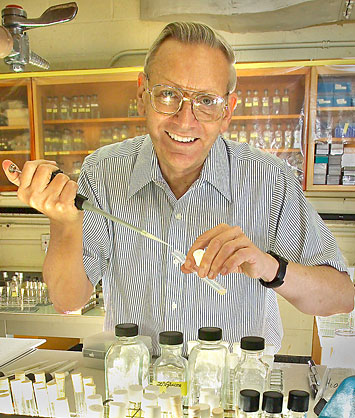 Biophysicist William Studier, whose career at Brookhaven Lab spanned more than 50 years, was granted emeritus status, effective at the time of his July 2015 retirement.

After earning a BS in biophysics from Yale in 1958, Studier continued his studies at the California Institute of Technology, earning his Ph.D. in 1963. Following a postdoctoral fellowship in the Department of Biochemistry at Stanford University School of Medicine, he joined Brookhaven Lab's Biology Department in 1964 as an assistant biophysicist. Over the years, Studier rose through the department's ranks, receiving tenure in 1971 and becoming a tenured senior biophysicist in 1974. He served as chair of the Biology Department from 1990 to 1999 and then returned to research.

At Brookhaven, Studier continued his earlier studies on the physical chemistry of the DNA of bacteriophage T7—a virus that inserts its DNA into an E. coli cell and rapidly directs the cell to produce and release as many as 250 new virus particles in approximately 15 minutes—and began to explore molecular genetics (how T7 DNA functions in the host cell). He studied basic processes such as control of gene expression, protein synthesis, and DNA replication, as well as virus-specific processes such as entry of DNA into the cell and assembly of virus particles. One high-impact practical outcome of this basic research was the development of the T7 expression system, which uses genetic elements of T7 DNA to direct E. coli to produce substantial amounts of almost any desired protein from the cloned gene.

In his congratulatory remarks, Lab Director Doon Gibbs said that Studier is "recognized by peers around the world for his contributions to the fundamental understanding of T7 bacteriophage biology and the evolution of bacterial genomes" and commended him for "developing solutions to problems in his personal research program, such as slab-gel electrophoresis and the T7 protein expression system, which are universally used in biochemistry and structural biology labs around the world."

Studier said, "I feel fortunate to have participated in an exciting era in molecular genetics and I am grateful for the supportive environment at Brookhaven that enabled me to take a long view in exploring basic biological processes and practical applications."

Meet 12 other scientists who have received emeritus status