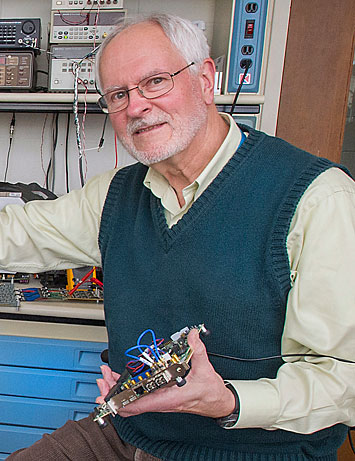 Emeritus status was granted to Peter Takacs of the Instrumentation Division, effective Sept. 2, one day after he retired. The emeritus position at Brookhaven Lab was established to recognize retired scientists who have made particularly noteworthy contributions to the Laboratory's reputation as a world-class scientific institution.

Takacs arrived at the Lab's Biology Department in 1979 as a senior research associate and was soon promoted to associate physicist in the Instrumentation Division. He left the Lab in 1982 and returned less than a year later as a physicist in Instrumentation. He was promoted over the years, receiving tenure in 1991, and retiring on Sept. 1.

For much of his career, Takacs has directed activities for the Instrumentation Division's Optical Metrology Laboratory, which he established in 1983 for the then-budding synchrotron radiation research community. His work has led to significant improvement in the quality of optical components manufactured for synchrotron light sources around the world. Virtually every mirror at the National Synchrotron Light Source (NSLS) passed through his laboratory and every major synchrotron around the world now has an optical metrology laboratory modeled after Takacs'—including NSLS-II at Brookhaven.

Much of this was made possible by his invention of the Long Trace Profiler, which characterizes the shape of optics. Takacs holds the patent and received an R&D 100 award for this invention, which was commercialized.

Takacs current work involves advanced characterization of charge coupled devices (CCDs) for optical astronomy. He is part of a Brookhaven team leading design and development of the CCD sensor array for the Large Synoptic Survey Telescope.

"You are a leader in the development of techniques and instrumentation used in the testing of the figure and finish of precision optical surfaces, particularly for synchrotron radiation—indeed, you recognized the need for a dedicated metrology laboratory in the early days of synchrotron radiation. Your work has resulted in technology transfer and a broad array of awards. Your recent work on metrology of charge coupled devices for the Large Synoptic Survey Telescope is widely recognized as enhancing BNL's standing in the astronomy community."

Takacs said, "It has been my privilege to work in an environment that was so supportive of my efforts to improve synchrotron optics. I was able to work with some very smart people, both here at the Lab and at other institutions around the world. I am gratified that my work has been recognized by the synchrotron optics community worldwide."

Meet 12 other scientists who have received emeritus status