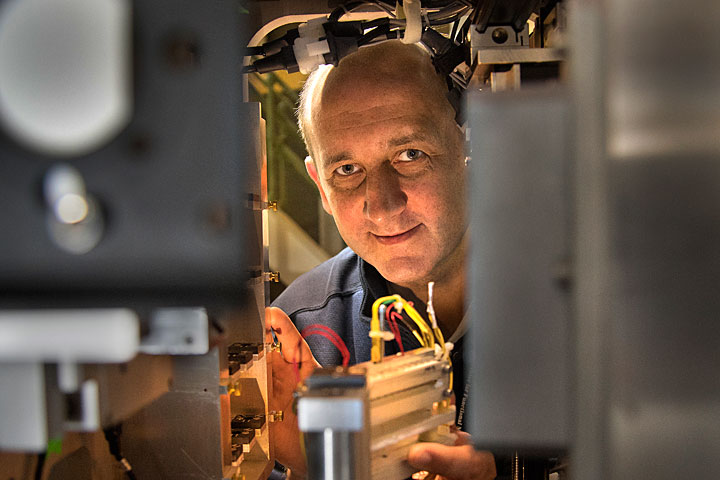 Dmytro Nykypanchuk, a scientist at the Center for Functional Nanomaterials, is pictured at the complex materials scattering beamline, where the study was conducted.

What do your skin, the clothes you wear, and the soil you stand on have in common? They are all porous substances. Like a sponge, their surfaces are covered with tiny holes that allow liquids and gasses to pass through. Porous materials are widespread throughout our world, and those with nanoscale pores—called mesoporous materials—make up everything from chemical catalyst supports to gas storage chambers and separation membranes.

To date, scientists have struggled to fabricate strong mesoporous materials; however, they have successfully developed “microporous” materials. These materials have even smaller pores, measuring less than two nanometers. Scientists construct these incredibly tiny materials using the “molecular framework” concept, where small, rigid molecules are interconnected to generate a continuous structure. While a lack of suitable building blocks in the mesoporous regime (two to 50 nanometers) has prevented scientists from developing strong mesoporous materials, a research team at the University at Buffalo (UB) has now solved this problem.

“Once you get to a certain size, most molecules become too flexible and aren’t strong enough to maintain a material’s pore framework,” said Dmytro Nykypanchuk, a scientist at the Center for Functional Nanomaterials (CFN)—a U.S. Department of Energy Office of Science User Facility located at Brookhaven National Laboratory. “This has led the scientists at UB to develop an entirely new approach to the synthesis of mesoporous materials.”

In a paper published in ACS Nano, the scientists describe synthesizing a new material from bottlebrush copolymers, a giant molecule with special architecture. These molecules have bristles that emanate from a backbone with end blocks. The research team predicted this unique combination of reactive components in a single molecule would form a strong material with controllable pores. Specifically, the side chains could serve as extra rigid interconnectors, while the reactive end blocks could help multiple bottlebrush molecules bind together.

“Bottlebrush copolymers provide a unique platform for fabricating mesoporous materials,” said Javid Rzayev, the lead researcher of the project and a chemistry professor at UB. “By manipulating their molecular architecture, we can control the molecular rigidity and the directionality of intermolecular interactions. This has allowed us to develop a mesoporous material with molecularly tunable parameters.” 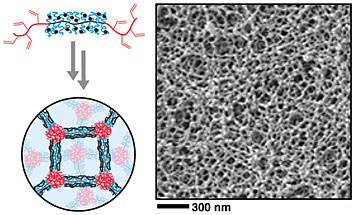 This image depicts the special architecture of bottlebrush copolymers (top left), which have bristles that emanate from a backbone with end blocks. By interconnecting these molecules, scientists fabricated a mesoporous material (right).

To confirm their results, the UB research team analyzed the new material’s structure at the National Synchrotron Light Source II (NSLS-II), also a DOE Office of Science User Facility. Using a technique called small angle x-ray scattering, the team directed the bright x-rays from beamline 11-BM—a beamline built in a partnership between NSLS-II and CFN—to observe how light bounces off the atoms within the material. The study revealed the new material was far different than those produced by traditional methods. Because each pore was constructed by several macromolecules, the newly developed material had a much larger number of pores per volume, while the pores exhibited uniform dimensions and maintained their rigidity. Most importantly, the scientists could control the pores by manipulating the structure of the bottlebrush copolymers.

“Because the pores are defined by molecular architecture, scientists have far more control over the pore size and the properties of these materials than they did before,” Nykypanchuk said.

With a sturdy and controllable framework to work off, scientists can now research ways to improve mesoporous materials, such as altering the nature of the pores to make them catalytically active.

This study was supported in part by the Donors of the American Chemical Society Petroleum Research Fund and by the National Science Foundation.