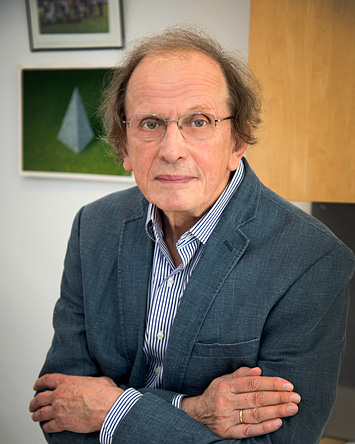 Emeritus status was granted to Radoslav Adzic of Brookhaven Lab's Chemistry Division, effective Oct. 21. The emeritus position at Brookhaven Lab was established to recognize retired scientists who have made particularly noteworthy contributions to the Laboratory's reputation as a world-class scientific institution.

Adzic started his career in Serbia, working at the Institute of Electrochemistry at the University of Belgrade from 1965 to 1992. He earned a Ph.D. in chemistry there in 1974, and served as research director from 1978 to 1983 and as director until 1992. He first came to Brookhaven Lab and stayed briefly as a visiting scientist in 1979, returning for good as a senior research associate in 1992. At the Lab, he was promoted to scientist in 1993, chemist in 2001, and chemist with tenure in 2005. He was leader of the Surface Electrochemistry and Electrocatalysis group for the past decade and retired on Oct. 20.

Electrocatalysts increase the rate of chemical reactions that produce or use electricity. Adzic's highest impact research and development (R&D) at Brookhaven has been with electrocatalysis for energy applications, particularly with fuel cells that produce electricity—with the only byproducts being water and heat. Adzic pioneered scientific understanding of electrocatalysis in surface structures and monolayers, showing that carefully tuning materials in layers where reactions occur could increase activity and stability while reducing the required amounts of expensive metals, such as platinum.

Adzic introduced and championed the concept of core-shell electrocatalysts to increase performance and durability while decreasing the cost of low-temperature hydrogen fuel cells. His group also applied these concepts to demonstrate more cost effective electrolyzers—which use electricity to split water into hydrogen and oxygen—that reduce costs for future sustainable hydrogen production from renewable electrical energy.

Adzic's research group has demonstrated that small amounts of performance-enhancing "dopants"—gold, in particular—can improve activity and durability in platinum-based electrocatalysts for fuel cells. His research also advanced multicomponent and monolayer electrocatalysts for electro-oxidation of organic compounds, such as methanol and ethanol, that are promising liquid fuels for fuel cell operation, but are difficult to efficiently catalyze.

Adzic has authored or co-authored more than 300 publications that have been cited more than 20,000 times. He has 21 issued patents and approximately 15 pending applications filed. Several patents have been licensed by two catalyst companies for commercial products. He is a fellow of the Electrochemical Society and the International Society of Electrochemistry and correspondent member of Serbian Academy of Sciences and Arts. In addition to being named a Battelle Inventor of the Year and receiving several other inventor prizes, he was presented with the U.S. Department of Energy's Hydrogen Program R&D Award twice—in 2008 and 2012—and an R&D100 Award in 2012.

"You are recognized by peers around the world for your contributions to basic and applied research in electrochemical energy conversion. Throughout your career, you have combined fundamental research in electrochemical processes, materials, and structures with innovative, practical applications. Your research leadership of the Laboratory's Surface Electrochemistry and Electrocatalysis group has contributed greatly to the worldwide reputation of the Laboratory's catalysis science efforts…Your work at Brookhaven over the past 26 years exemplifies the goal of basic research translated to improved energy technologies."

Adzic said, "I have been fortunate in that my arrival at Brookhaven coincided with strong national support for broad research in electrocatalysis of reactions of direct energy conversion in fuel cells. Historically, this was the third major campaign to develop this clean energy source. With the support from colleagues from Brookhaven, and funds from the DOE and the automotive industry, I am proud that my group made a contribution to better understanding of electrocatalysis and to the development of electrocatalysts for fuel cells that make electric vehicles a reality. I hope that the environmental benefits that will follow will secure a continuation of this research to accelerate critically needed improvements of our environment."