The Center for Functional Nanomaterials (CFN) recently selected winners for its 2009 CFN Image Challenge. Winners were selected in two categories: a science category for any scientific data or result displayed in a visually appealing form, and a “My CFN” category for images depicting the CFN, its people, and how they interact in their life and work. 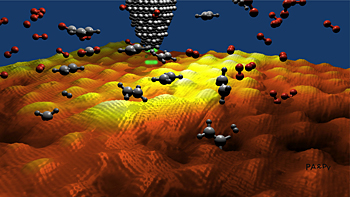 Dancing Molecules on Graphene. Percy Zahl’s rendering of a scanning tunneling microscope (STM) probing the face of graphene as free-floating molecules of oxygen and ethylene absorb onto its surface. Graphene’s high electron mobility has promising applications for future electronic devices.

Percy Zahl took the top prize in the science category for “Dancing Molecules on Graphene,” which depicts molecular interactions on a graphene surface less than a nanometer thick. Bill Sherman won in the My CFN category for “Goose with Top Hat,” a photograph with a unique perspective on some of the plentiful Brookhaven wildlife that frequent the center’s grounds.

All CFN staff members were eligible to submit images for the contest. The submission period closed at the end of August, and winners were selected at the annual CFN retreat during the first week of September. Submitted photos were on display at the retreat, where CFN staff determined the winners by popular vote.

Zahl’s image, “Dancing Molecules on Graphene,” is a computer-generated visualization of actual nanoresearch he and his colleagues are conducting at the CFN. The shape of the corrugated surface is taken from real 3D mapping data of graphene—a single-atom thin sheet of graphite, which itself is a specifically arranged pattern of carbon atoms.

Graphene possesses unique physical and chemical properties, and is now becoming a popular subject of research in the field of nanoscience. “Graphene is nothing more than a single atomic layer of graphite and is currently a ‘hot topic’ due to its very unique electronic and chemical characteristics, and extremely high electron mobility,” Zahl said. “This is a very interesting material to study and is promising for next-generation electronic devices.”

The free-floating “dancing” molecules are oxygen and ethylene (scaled upwards for easier visualization), and can be seen breaking their bonds and reacting with the surface. The cone in the background is a representation of a scanning tunneling microscope (STM), which CFN scientists are using to examine molecular interactions with surfaces with single-molecule sensitivity. 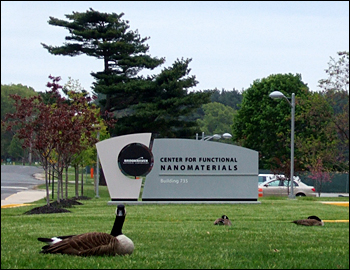 Goose with Top Hat. Bill Sherman came away from the CFN image contest with the top prize in the “My CFN” category for this photograph of the winged denizens of the center’s lawns. The peculiar perspective of one goose in front of the center’s sign provided a unique photo opportunity.

Bill Sherman’s picture is clearly on a more familiar scale. Give his “Goose with Top Hat” only a cursory glance and the photograph’s title is immediately self-explanatory.

While Sherman was walking into the CFN one day, he ran across a group of geese sitting on the front lawn. Although this would otherwise be an unremarkable occurrence given the Lab’s reputation for abundant — and confident — wildlife, the particular arrangement of one goose in front of the CFN sign provided a unique photo opportunity. Fortunately, he had his camera with him and was able to preserve this peculiar moment for us all.

Sherman started taking pictures of Brookhaven’s wildlife shortly after joining the lab several years ago. He often keeps a camera on hand, having learned that the chance for a great photo could strike at any moment. Besides capturing high-profile favorites such as deer, geese, turkey, and groundhogs on film, he has managed to photograph elusive skunks and insects at the Lab.

Zahl and Sherman will have their winning pictures permanently displayed in the first floor halls of the CFN. See the gallery for other top entries in the CFN contest. 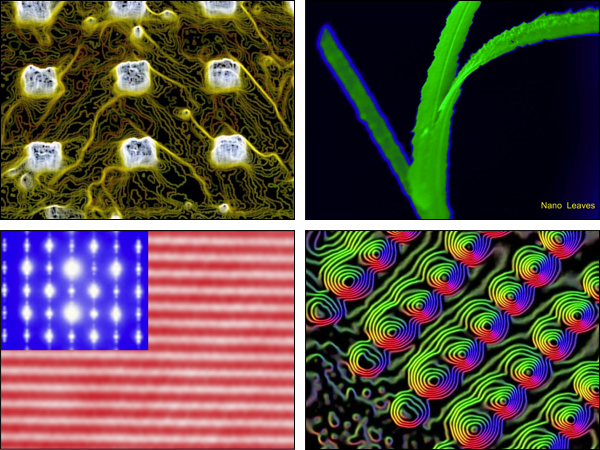 Magnetic Domains of FePt dots on PY/MgO. (Top, Left) Lorraine Davis enhanced this 45 micron (1 micron is a millionth of a meter) scan of iron platinum blocks in a polymer matrix patterned on magnesium oxide. The yellow lines represent the lines of force caused by the sample’s magnetic field, which Davis detected using magnetic force microscopy. Nano Leaves. (Top, Right) Despite their plant-like appearance, these nanobelts captured by Weiqiang Han are artificial structures that are 5 microns long and only 10 nanometers thick (1 micron is a millionth of a meter, 1 nanometer is a billionth). The flatness of natural plant leaves enhances their ability to absorb light; nanobelts are mimicking this shape for applications in solar energy. Nano Flag. (Bottom, Left) Yimei Zhu put together the nation’s flag using images of manganese oxide captured by an advanced electron microscope at a magnification of 50 million times. The stars are the diffraction patterns and the stripes are the corresponding lattice image, caused by the charge and orbital ordering of the system’s electrons. Nano Vortex. (Bottom, Right) The whirling colors that Yimei Zhu captured in this nanoscale image correspond to the different magnetization directions of an arrangement of nickel and nickel oxide. Quantum-dots arrays of these materials have potential applications for high-density recording devices.