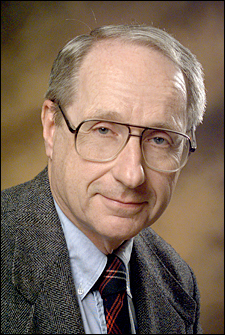 John Sutherland, Biology Department, has been honored with the title Senior Biophysicist Emeritus. Although he retired on August 22, 2009, after a 32-year career at BNL, Sutherland will continue his research on the biological effects of ultraviolet and ionizing radiation and the use of synchrotron radiation circular dichroism (SRCD) to study the solution structure of DNA, proteins and other biological macromolecules.

“I am pleased to receive this designation, which will allow me to continue my research at BNL” Sutherland said.

Sutherland developed the first beamline for measuring circular dichroism (CD) using ultraviolet synchrotron radiation, which was initially operated at the National Institute of Science and Technology, and has been located at National Synchrotron Light Source (NSLS) beamline U9B since 1982. A second beamline, U11, was subsequently adapted for SRCD at the NSLS. Other SRCD beamlines have been built or are under development at about a dozen synchrotron light sources in Europe, Asia and Australia.

In 1977, while at the University of California at Irvine, Sutherland designed and built a spectrometer for measuring both CD and UV-induced fluorescence of samples. Fluorescence is light that is emitted by a material immediately after excitation by light of a higher energy. Scientists gain information about materials by studying the wavelength, time delay, and polarization of the fluorescence, and such methods have numerous applications in biology, chemistry, and physics. This was the conceptual basis for the first synchrotron beamline, to which was added the ability to measure the absorption spectrum of the sample at the same time as the CD and fluorescence. The resulting instrument, sometimes referred to as a FluoroDichroSpectroPhotometer, makes it possible to measure multiple parameters during the same spectral scan, which is useful in following multiple manisfestations of the state of a sample and in providing quality assurance of sample integrity.

In 1987, Sutherland’s group won an R&D 100 Award for IMAGESystem, an electronic imaging system for accurate quantitative recording of the distribution of DNA in an electrophoretic gel. R&D Magazine gives these awards annually to the top 100 technological achievements of the year. IMAGESystem made possible a new method for measuring damage to DNA by UV radiation and other physical and chemical carcinogens. Sutherland designed the software that analyzes the digital images recorded by the IMAGESystem and successor digital camera systems and provided a large, high intensity monochromator, which was used to measure the efficiencies of different wavelengths of UV light in producing DNA damage. Sutherland and his group also built a prototype imaging system to characterize ion beams at the National Space Radiation Laboratory (NSRL). The NSRL uses beams of heavy ions provided by BNL’s Booster accelerator to study the effects of simulated space radiation on biological and physical systems.

In 1997, Sutherland and collaborators won an R&D 100 Award for inventing the Fluorescence Omnylizer, which detects visible and ultraviolet fluorescent light. The omnilyzer improves upon existing detectors because it allows researchers to obtain simultaneously all the important information in a fluorescence emission spectrum: the distribution of wavelengths, the time course of the fluorescence and the polarization of each detected photon. Gathering all this information simultaneously is faster than obtaining it with conventional fluorescence instruments and crucial when the fluorescence is weak, because it can then be damaged by the exciting light.

Besides developing instrumentation and performing spectroscopic experiments at the NSLS, Sutherland collaborated with the late Senior Biochemist Betsy Sutherland, Biology Department, in studying DNA damage. They invented methods based on gel electrophoresis for quantifying lesions in DNA, called pyrimidine dimers, caused by UV light, as well as double-strand DNA breaks and sites with multiple damages produced by ionizing radiation, including heavy ions from the NSRL.

Sutherland developed a theoretical model to predict the biological effects of irradiating cells with broad spectrum UV light, such as sunlight, and he recently developed a new stochastic model for the survival of irradiated cells as a function of radiation dose. This model extends the range of biological effects that can be predicted for polychromatic UV light and can be used to describe the decrease in cell survival resulting from ionizing radiation.

Sutherland graduated from Stuyvesant High School in New York City and earned a B.S., M.S., and Ph.D. – all in physics – from the Georgia Institute of Technology, in 1962, 1964, and 1967, respectively. He did postdoctoral research at the Walter Reed Army Institute of Research from 1967 to 1969, while serving as a Captain in the Army Medical Service Corps. From 1969 to 1972, he was an NIH postdoctoral fellow at the University of California in Berkeley, and he subsequently was an assistant/associate professor at the School of Medicine, University of California, Irvine, from 1973 to 1977. He joined Brookhaven Lab in 1977 as a biophysicist, became head of the Synchrotron Ultraviolet Biology User Facility in 1979, and was promoted to senior biophysicist in 1988.