This story originally appeared on the DOE Office of Science website. 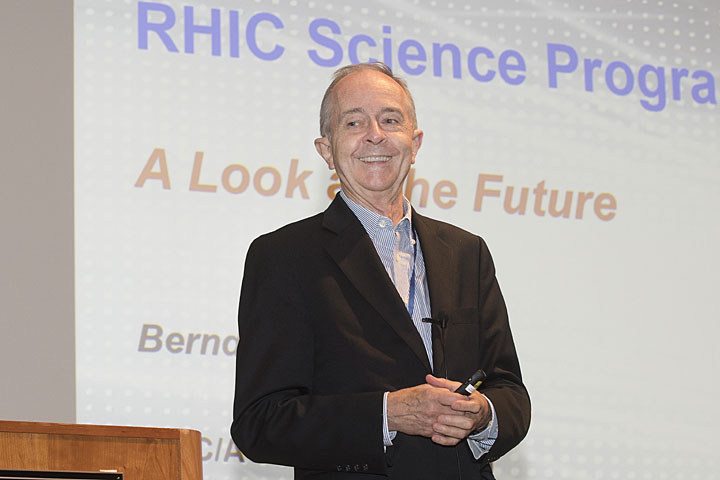 Recreating the beginning of the universe doesn’t happen every day. That is, unless you’re at the Relativistic Heavy Ion Collider (RHIC), a Department of Energy (DOE) Office of Science user facility at DOE’s Brookhaven National Laboratory (BNL). This nuclear physics research facility mimics the staggeringly hot conditions that occurred 13 billion years ago just after the Big Bang.

Such a unique facility requires an equally unique team to guide it. Instead of a single director, laboratory staff and user scientists work together to guide the facility’s scientific agenda. While there’s a huge number of researchers and staff members who participate in identifying scientific opportunities for the facility, two stand out: Berndt Mueller and Rosi Reed. These physicists represent the cooperative vision that identifies the most compelling science for RHIC.

Mueller represents the laboratory side of the equation. His responsibilities as BNL’s associate laboratory director for nuclear and particle physics focus on guiding the work and ensuring scientists have the resources they need. As the chair of the user executive committee, Reed represents the nearly 1,000 researchers who come to RHIC from around the world to run experiments. 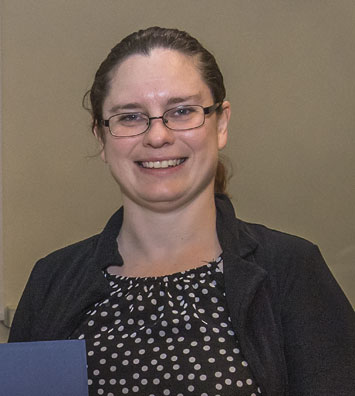 Machines like RHIC need people with a variety of skills: engineers, technicians, theorists, and experimentalists. Reed and Mueller’s own backgrounds reflect this diversity.

Reed didn’t start her career expecting to study the smallest components of the universe. Although she studied physics in college, her first job was as a Silicon Valley engineer during the dot-com boom. After three years, she shifted back to her original love. As she earned her PhD at the University of California, Davis, she discovered RHIC. For her thesis, she examined how to use a specific particle to measure temperatures inside RHIC’s collisions. As she said, “You can’t stick a thermometer in it!”

After a post-doc at Yale University and a stint at the CERN research facility in Switzerland, she became an assistant professor at Lehigh University. Because Lehigh didn’t have a high energy or nuclear physics program at the time, the department gave her free reign to create her research portfolio. She returned to RHIC, where she’s been running experiments since 2015. When she visits the facility in person, she particularly likes building and modifying RHIC’s particle detectors. “I can really get my hands on the machine,” she said. Since June 2018, Reed has served as the RHIC users’ executive committee chair, where she represents RHIC’s researcher community.

Mueller’s path began in Germany where — even as a kid — he was interested in how things work. “We know the fundamental forces,” he said, referring to the four fundamental forces of nature: gravity, electromagnetism, the weak force, and the strong force. “But we have to figure out how they build the core of matter around us, the atomic nuclei.”

After receiving his PhD in theoretical physics from Frankfurt’s Goethe University, he recognized RHIC would allow him to study both the nucleus and the forces that hold it together. He said, “When the Relativistic Heavy Ion Collider was being built, I thought, ‘This is the place for me.’” While he’s physically located at and employed by BNL, he also holds a professorship at Duke University.

To replicate the conditions at the beginning of the universe, RHIC produces the quark-gluon plasma (QGP). The QGP isn’t an ordinary plasma. Unlike plasma in stars, QGP is the only substance in the universe where the quarks and gluons that make up all protons, neutrons, and other types of particles aren’t coupled together. Instead, quarks, anti-quarks, and gluons move freely.

“This is a really unique form of matter,” said Reed.

RHIC produces the QGP by smashing heavy ions — charged particles with lots of protons and neutrons — into each other at extreme speeds.

First, RHIC creates a stream of ions called a beam. Because RHIC can create beams from nearly any element, it’s more flexible than the only other facility that does similar work — the Large Hadron Collider at CERN. The beam moves through a series of machines that accelerate the particles up to 99.995 percent the speed of light. This chain of accelerators feeds the beams into narrow steel pipes running around a huge circular concrete tunnel. Where the beams’ paths cross, the particles crash into each other.

The colliding particles produce temperatures up to four trillion degrees. That’s 250,000 times hotter than the core of the sun. That energy “melts” the protons and neutrons, splitting them into their constituent quarks and gluons.

But the QGP lasts for only a billionth of a trillionth of a second. After that, it cools. The quarks and gluons come together and reform into different, often exotic, particles.

Sophisticated detectors help scientists catch a glimpse of these particles. Having multiple detectors helps scientists take data on different aspects of the QGP as well as compare the results.

The size of a house, the Solenoidal Tracker at RHIC (STAR) is 1,200 tons of particle-detection machinery. It captures information about protons, neutrons, and electrons as they fly away from the collision at a wide range of angles. Scientists can use the angles to determine the particles’ energy. The more particles that emerge perpendicular to the beam, the more energy the collision produced.

Another detector, the Pioneering High Energy Nuclear Interaction eXperiment (PHENIX) took data on a larger variety of particles at a much narrower range of angles. Scientists also used PHENIX to understand protons’ characteristics, especially spin. PHENIX stopped taking data in 2016 to be upgraded to a new detector, sPHENIX. The new detector will focus on how quarks’ and gluons’ interactions determine the QGP’s characteristics. sPHENIX is scheduled to launch in 2022.

“It’s really true teamwork,” said Mueller. “It is not something that is ultimately governed by a hierarchy of administration.”

Reed facilitates communications between the visiting scientists and the laboratory, particularly on quality-of-life issues. From building the STEM workforce to cafeteria food, she helps BNL understand users’ needs. She also explains to users why BNL makes certain decisions — even when users don’t like them.

“I understand that this isn’t an arbitrary whim,” she said. “The most interesting part for me was learning how the sausage is made.” She also leads the annual user meeting, where scientists share their results, lessons learned, and visions for future research.

Mueller oversees logistical and strategic support, ensuring that scientists have what they need to do their research. Those needs can be time on the machines, funding, strategic direction, institutional support for inclusion, or assistance from staff members.

“Ultimately, it all comes down to resources,” he said. “The scarcest resource at RHIC is beam time.”

Figuring out who gets what resources also results from a collective effort. Each detector has its own team, which proposes experiments and minor upgrades.

If an existing detector isn’t capable of taking needed data, a scientist can propose developing a new one. But space on the floor is at a premium. The researcher needs to show the scientific need, help acquire funding, and explain how the new detector will or won’t affect other users’ work. The program advisory committee, a group of esteemed physicists, has the final say on whether a proposed experiment or upgrade is scientifically compelling and ready for prime time. It took the STAR collaboration three years of presenting their ideas for an upgrade before the program advisory committee gave them the go-ahead.

Ever since scientists confirmed that RHIC does produce the QGP, they’ve been investigating its bizarre properties.

One of the weirdest characteristics is the fact that the QGP acts like a liquid. Not just any liquid – a “perfect” liquid. Originally, scientists expected the QGP to act like a gaseous plasma, the same stuff that makes up stars. In gaseous plasma, particles interact very little. But much to scientists’ surprise, they found the QGP flows in a very coordinated way.

“It suddenly converts into a liquid from a gas. From heating! That’s totally unprecedented,” said Mueller.

On top of that, physics theory provides no obvious reason why this transformation should happen.

“There’s not a term in the equation that says this is where this perfect fluid or nearly perfect fluid variable is. It’s something that emerges from the interaction,” said Reed. “Our normal way of calculating processes really fails in this regime.”

A better understanding of the QGP may help scientists understand other strongly coupled systems that physics struggles to explain, such as black holes.

Scientists are also using this characteristic to investigate if other types of collisions can form the QGP. While they thought that only two sets of heavy ions could produce the QGP, results from PHENIX have showed that colliding heavy ions with protons can produce it as well.  Just like the heavy ion collisions, these collisions also produced the characteristic perfect fluid.

The STAR team is currently taking new sets of data after recently upgrading its detector. The upgrades increase the detector’s precision, revealing more than ever before about the transition between conventional matter and the QGP.

“For me, the highlight is when I see that years of planning and discussion and hard work ultimately result in a surprising and important scientific publication,” said Mueller. “It’s what makes all of the work and the frustrations along the way worth it.”

In Fiscal Year 2018, RHIC and the other user facilities welcomed more than 36,000 researchers — from academic, industry, and government laboratories in all 50 states and the District of Columbia — to perform new scientific research. For details on the DOE Office of Science user facilities, go to https://www.energy.gov/science/science-innovation/office-science-user-facilities.

The Office of Science is the single largest supporter of basic research in the physical sciences in the United States and is working to address some of the most pressing challenges of our time. For more information please visit https://www.energy.gov/science