This story originally appeared in Purdue University’s newsroom on Dec. 17. It describes research published in the Proceedings of the National Academy of Sciences on a material (samarium nickel oxide) whose quantum nature enables it to mask its heat properties from infrared cameras. Jurek Sadowski, a scientist at Brookhaven Lab’s Center for Functional Nanomaterials (CFN), contributed to the research. The team of scientists obtained nanoscale x-ray absorption spectra at the x-ray photoemission electron microscopy endstation of the Electron Spectro-Microscopy beamline at Brookhaven’s National Synchrotron Light Source II (NSLS-II). This endstation is jointly operated by CFN and NSLS-II, both U.S. Department of Energy Office of Science User Facilities. The spectra showed that the material undergoes a temperature-driven transition from an insulating to a conducting phase, keeping its thermal light emission properties nearly the same over a certain temperature range.

Camouflage Made of Quantum Material Could Hide You From Infrared Cameras 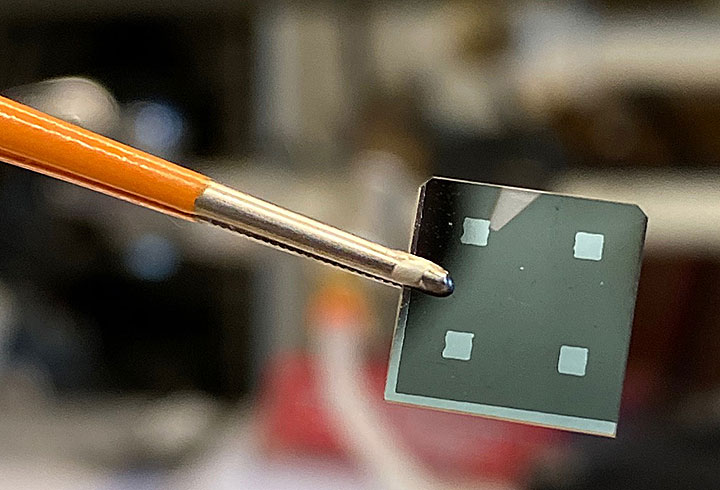 A quantum material tricks an infrared camera by concealing the heat properties of an object that would give it away. (Purdue University photo/Erin Easterling)

WEST LAFAYETTE, Ind. — Infrared cameras detect people and other objects by the heat they emit. Now, researchers have discovered the uncanny ability of a material to hide a target by masking its telltale heat properties.

The effect works for a range of temperatures that one day could include humans and vehicles, presenting a future asset to stealth technologies, the researchers say.

What makes the material special is its quantum nature – properties that are unexplainable by classical physics. The study, published today (Dec. 17) in the Proceedings of the National Academy of Sciences, is one step closer to unlocking the quantum material’s full potential.

The work was conducted by scientists and engineers at the University of Wisconsin-Madison, Harvard University, Purdue University, the Massachusetts Institute of Technology and Brookhaven National Laboratory.

Fooling infrared cameras is not new. Over the past few years, researchers have developed other materials made of graphene and black silicon that toy with electromagnetic radiation, also hiding objects from cameras.

The discovery does not violate any laws of physics, but suggests that these laws might be more flexible than conventionally thought. A YouTube video explaining the material is available at https://youtu.be/W12Z_iiVvd8.

Quantum phenomena tend to come with surprises. Several properties of the material, samarium nickel oxide, have been a mystery since its discovery a few decades ago.

Shriram Ramanathan, a professor of materials engineering at Purdue, has investigated samarium nickel oxide for the past 10 years. Earlier this year, Ramanathan’s lab co-discovered that the material also has the counterintuitive ability to be a good insulator of electrical current in low-oxygen environments, rather than an unstable conductor, when oxygen is removed from its molecular structure.

Additionally, samarium nickel oxide is one of a few materials that can switch from an insulating phase to a conducting phase at high temperatures. University of Wisconsin-Madison researcher Mikhail Kats suspected that materials with this property might be capable of decoupling temperature and thermal radiation.

“There is a promise of engineering thermal radiation to control heat transfer and make it either easier or harder to identify and probe objects via infrared imaging,” said Kats, an associate professor of electrical and computer engineering.

Ramanathan’s lab created films of samarium nickel oxide on sapphire substrates to be compared with reference materials. Kats’ group measured spectroscopic emission and captured infrared images of each material as it was heated and cooled. Unlike other materials, samarium nickel oxide barely appeared hotter when it was heated up and maintained this effect between 105 and 135 degrees Celsius.

“Typically, when you heat or cool a material, the electrical resistance changes slowly. But for samarium nickel oxide, resistance changes in an unconventional manner from an insulating to a conducting state, which keeps its thermal light emission properties nearly the same for a certain temperature range,” Ramanathan said.

Because thermal light emission doesn’t change when temperature changes, that means the two are uncoupled over a 30-degree range.

According to the Kats, this study paves the way for not only concealing information from infrared cameras, but also for making new types of optics and even improving infrared cameras themselves.

“We are looking forward to exploring this material and related nickel oxides for infrared camera components such as tunable filters, optical limiters that protect sensors, and new sensitive light detectors,” Kats said.

The work was supported by the Office of Naval Research, the National Science Foundation, the Air Force Office of Scientific Research and Sandia National Labs. The research used resources at the U.S. Department of Energy’s Brookhaven National Laboratory.

Note to Journalists: For a copy of the paper, please contact Kayla Wiles, Purdue News Service, at wiles5@purdue.edu or 765-494-2432. A YouTube video is available at https://youtu.be/W12Z_iiVvd8 and other multimedia can be found in a Google Drive folder at http://bit.ly/ir-camouflage-media. The materials were prepared by Erin Easterling, digital producer for the Purdue College of Engineering.

Brookhaven National Laboratory is supported by the Office of Science of the U.S. Department of Energy. The Office of Science is the single largest supporter of basic research in the physical sciences in the United States, and is working to address some of the most pressing challenges of our time. For more information, please visit http://energy.gov/science.