Scientists synthesized an energy-dense cathode material that has a continuous gradient of lithium concentration, preventing battery failure from oxygen release 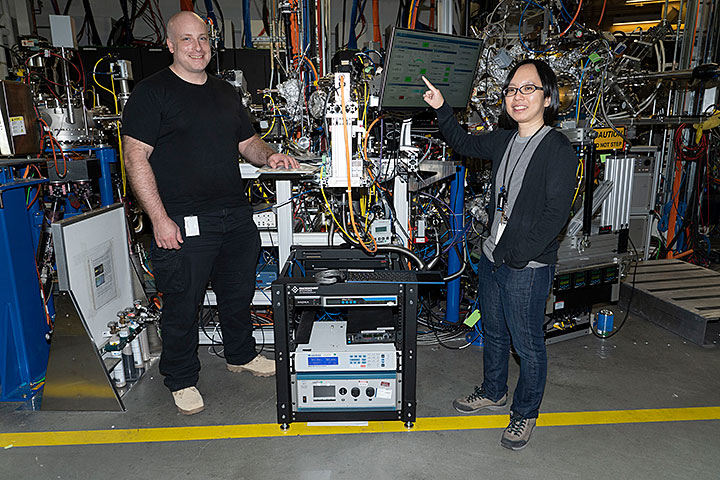 NSLS-II scientists Adrian Hunt (left) and Iradwikanari Waluyo (right) at the IOS beamline, where part of the research was conducted.

From smartphones to electric vehicles, lithium-ion batteries power some of the newest and most prevalent technologies in society. That’s why scientists are working to make these batteries more powerful, more reliable, and longer lasting via new cathode materials.

Choosing more energy-dense materials to build a cathode can solve some of the current challenges, but it often comes with a trade-off, such as gaining battery power in exchange for stability. But now, researchers at the Massachusetts Institute of Technology (MIT) have synthesized a new, energy-dense cathode material for lithium-ion batteries that also solves stability issues. They teamed up with scientists at the National Synchrotron Light Source II (NSLS-II) and used facilities at the Center for Functional Nanomaterials (CFN)—two U.S. Department of Energy (DOE) Office of Science User Facilities at DOE’s Brookhaven National Laboratory—to study chemical changes in the battery over time. The collaboration’s work is published in Nature Energy.

“As you cycle lithium-ion batteries, they can change shape and start to fracture. All kinds of problems can arise that negatively impact how the battery functions,” said co-author Adrian Hunt, a scientist at the In situ and Operando Soft X-ray Spectroscopy (IOS) beamline at NSLS-II, where part of the research was conducted. “One of the causes of these problems is that cathode materials lose oxygen content near the surface. Our collaborators at MIT synthesized a material that locks in the structure of the cathode and its oxygen atoms, preventing the material from expanding and contracting.”

Using molten salt materials and a novel synthesis method, the researchers at MIT developed a cathode with a continuous gradient of lithium in which the concentration is far greater at the material’s core, or “bulk,” than at its surface.

“Traditional cathode materials have a uniform concentration of lithium from the surface through the bulk of the material, so, as the battery operates, oxygen is free to migrate to the surface and, eventually, it gets released, causing the battery to fail,” said co-author Iradwikanari Waluyo, lead beamline scientist at IOS. “The new cathode material, which is lithium-rich towards the bulk and less concentrated at the surface, essentially creates a shell that locks in oxygen, so it doesn’t migrate to the surface and it doesn’t get released.”

Beyond having different concentrations of lithium at the surface and the bulk, a key part of this material’s successful design is the continuous gradient of lithium in between.

“Typically, materials are not continuous,” Hunt said. “If you look down at a very small scale, there will be little grains between sections of the material where the atomic structure is slightly mismatched—like cracks in the material. Those places are problematic for conducting electricity and they also allow for oxygen movement.”

Before the scientists at MIT could understand exactly how their new material was functioning, they needed to bring it to the IOS beamline at NSLS-II, where Waluyo and Hunt used ultrabright “soft” x-rays to reveal the chemical state of the battery in detail. Compared to hard x-rays, which are useful for penetrating heavy elements like metals, soft x-rays can detect lighter elements like oxygen and are more sensitive to their chemical states.

“In addition to detecting oxygen, soft x-rays were critical for studying the different elemental concentrations and chemical states in the material from its surface to its bulk,” Waluyo said. “We can use different detection methods at IOS to tune the sensitivity of the technique to be surface sensitive or bulk sensitive. By looking at the electrons coming out of the sample we can study the surface, and by looking at the photons coming out the sample we can study the bulk.”

IOS is also equipped with a silicon drift detector, which enables researchers at the beamline to differentiate between photons coming from specific elements in the sample. This increases the elemental sensitivity of the technique and eliminates distortions in the data.

“You would not be able to do these kinds of measurements at a standard soft x-ray beamline,” Hunt said. “Most beamlines collect all the photons that come from the sample and you can’t tell the difference between them.”

In addition to NSLS-II, the researchers also leveraged one of the seven facilities at the Center for Functional Nanomaterials (CFN), another DOE Office of Science User Facility at Brookhaven Lab. CFN’s electron microscopy (EM) facility helped the scientists understand the lithium elemental gradient profile across the novel cathode particles.

Moving forward, the researchers at MIT are continuing to collaborate with Waluyo and Hunt at NSLS-II's IOS beamline.

“They’re experts in making new materials,” Waluyo said. “They make a material and they know it works, but then we come in and show why it works. We look forward to our next experiment together.”

“We are thrilled to work with the exceptional staff at Brookhaven National Laboratory and at the state-of-the-art IOS beamline at NSLS-II,” said MIT’s Ju Li, corresponding author of the paper. “The exciting discoveries today would not be possible without them, and we look forward to much more collaborative work in the future.”

This study was supported in part by the National Science Foundation. Operations at NSLS-II and CFN are supported by DOE’s Office of Science.