The following media update about new research results from the Large Hadron Collider (LHC) was posted by CERN, the European laboratory for particle physics research, as part of a series related to the 2020 Large Hadron Collider Physics conference. The U.S. Department of Energy's Brookhaven National Laboratory serves as the U.S. host laboratory for the ATLAS experiment at the LHC and plays multiple roles in this international collaboration, from construction and project management to data storage, distribution, and analysis. For more information about Brookhaven's role in research at ATLAS, see: http://www.bnl.gov/atlas/. To interview a Brookhaven Lab scientist about these new results, contact Karen McNulty Walsh, kmcnulty@bnl.gov, (631) 344-8350. 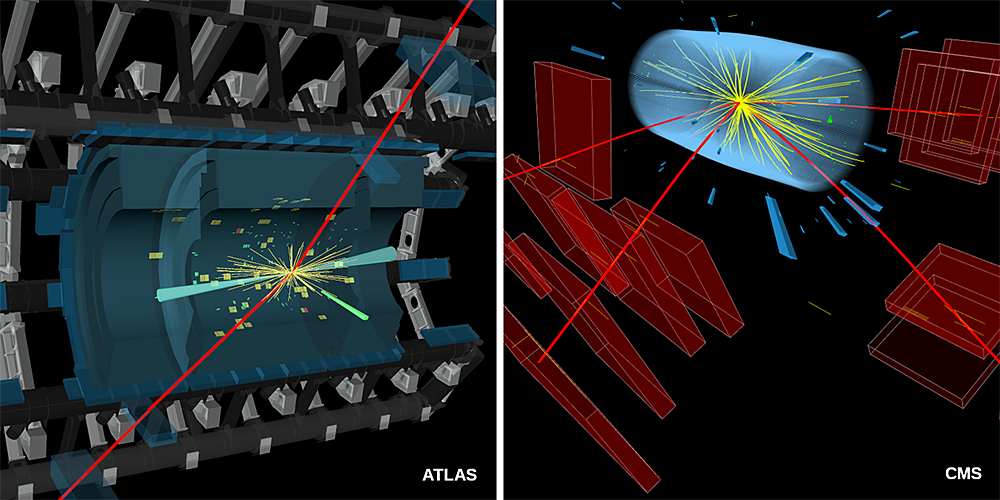 This media update is part of a series related to the 2020 Large Hadron Collider Physics conference, taking place 25–30 May 2020. Originally planned to be held in Paris, the conference is now taking place entirely online due to the COVID-19 pandemic.

The ATLAS and CMS collaborations presented their latest results on new signatures for detecting the Higgs boson at CERN’s Large Hadron Collider. These include searches for rare transformations of the Higgs boson into a Z boson – which is a carrier of one of the fundamental forces of nature – and a second particle. Observing and studying transformations that are predicted to be rare helps advance our understanding of particle physics and could also point the way to new physics if observations differ from the predictions. The results also included searches for signs of Higgs transformations into “invisible” particles, which could shine light on potential dark-matter particles. The analyses involved nearly 140 inverse femtobarns of data, or around 10 million billion proton–proton collisions, recorded between 2015 and 2018.

The ATLAS and CMS detectors can never see a Higgs boson directly: an ephemeral particle, it transforms (or “decays”) into lighter particles almost immediately after being produced in proton–proton collisions, and the lighter particles leave telltale signatures in the detectors. However, similar signatures may be produced by other Standard-Model processes. Scientists must therefore first identify the individual pieces that match this signature and then build up enough statistical evidence to confirm that the collisions had indeed produced Higgs bosons.

When it was discovered in 2012, the Higgs boson was observed mainly in transformations into pairs of Z bosons and pairs of photons. These so-called “decay channels” have relatively clean signatures making them more easily detectable, and they have been observed at the LHC. Other transformations are predicted to occur only very rarely, or to have a less clear signature, and are therefore challenging to spot.

At LHCP, ATLAS presented the latest results of their searches for one such rare process, in which a Higgs boson transforms into a Z boson and a photon (γ). The Z thus produced, itself being unstable, transforms into pairs of leptons, either electrons or muons, leaving a signature of two leptons and a photon in the detector. Given the low probability of observing a Higgs transformation to Zγ with the data volume analysed, ATLAS was able to rule out the possibility that more than 0.55% of Higgs bosons produced in the LHC would transform into Zγ. “With this analysis,” says Karl Jakobs, spokesperson of the ATLAS collaboration, “we can show that our experimental sensitivity for this signature has now reached close to the Standard Model’s prediction.” The extracted best value for the H→Zγ signal strength, defined as the ratio of the observed to the predicted Standard-Model signal yield, is found to be 2.0+1.0−0.9.

CMS presented the results of the first search for Higgs transformations also involving a Z boson but accompanied by a ρ (rho) or φ (phi) meson. The Z boson once again transforms into pairs of leptons, while the second particle transforms into pairs of pions (ππ) in the case of the ρ and into pairs of kaons (KK) in the case of the φ. “These transformations are extremely rare,” says Roberto Carlin, spokesperson of the CMS collaboration, “and are not expected to be observed at the LHC unless physics from beyond the Standard Model is involved.” The data analysed allowed CMS to rule out that more than approximately 1.9% of Higgs bosons could transform into Zρ and more than 0.6% could transform into Zφ. While these limits are much greater than the predictions from the Standard Model, they demonstrate the ability of the detectors to make inroads in the search for physics beyond the Standard Model.

The so-called “dark sector” includes hypothetical particles that could make up dark matter, the mysterious element that accounts for more than five times the mass of ordinary matter in the universe. Scientists believe that the Higgs boson could hold clues as to the nature of dark-matter particles, as some extensions of the Standard Model propose that a Higgs boson could transform into dark-matter particles. These particles would not interact with the ATLAS and CMS detectors, meaning they remain “invisible” to them. This would allow them to escape direct detection and manifest as “missing energy” in the collision event. At LHCP, ATLAS presented their latest upper limit – of 13% – on the probability that a Higgs boson could transform into invisible particles known as weakly interacting massive particles, or WIMPs, while CMS presented results from a new search into Higgs transformations to four leptons via at least one intermediate “dark photon”, also presenting limits on the probability of such a transformation occurring at the LHC.

The Higgs boson continues to prove invaluable in helping scientists test the Standard Model of particle physics and seek physics that may lie beyond. These are only some of the many results concerning the Higgs boson that were presented at LHCP. You can read more about them on the ATLAS and CMS websites.

When data volumes are not high enough to claim a definite observation of a particular process, physicists can predict the limits that they expect to place on the process. In the case of Higgs transformations, these limits are based on the product of two terms: the rate at which a Higgs boson is produced in proton–proton collisions (production cross-section) and the rate at which it will undergo a particular transformation to lighter particles (branching fraction).

Links to the papers and notes

Brookhaven Lab’s contributions to the ATLAS experiment are supported by the DOE Office of Science.