The following press release was originally issued by the Massachusetts Institute of Technology (MIT). It describes how researchers at MIT developed a more reliable and energy efficient approach to neural networks using an analog device that mimics brain processes. To study the electrochemical properties of the device’s core component (a resistive switch), the MIT researchers came to the National Synchrotron Light Source II (NSLS-II)—a U.S. Department of Energy (DOE) Office of Science User Facility at DOE’s Brookhaven National Laboratory. The team worked with scientists at the In situ and Operando Soft X-Ray Spectroscopy (IOS) beamline at NSLS-II to perform an experimental technique called ambient pressure partial fluorescence yield soft x-ray absorption spectroscopy, which enabled the researchers to track changes in the electronic states of oxygen as the switch operated.  For more information on Brookhaven’s role in this work, contact Stephanie Kossman (skossman@bnl.gov, 631-344-8671).

Engineers Design a Device That Operates Like a Brain Synapse

Teams around the world are building ever more sophisticated artificial intelligence systems of a type called neural networks, designed in some ways to mimic the wiring of the brain, for carrying out tasks such as computer vision and natural language processing.

The findings are described in the journal Nature Communications, in a paper by MIT professors Bilge Yildiz, Ju Li, and Jesús del Alamo, and nine others at MIT and Brookhaven National Laboratory. The first author of the paper is Xiahui Yao, a former MIT postdoc now working on energy storage at GRU Energy Lab.

Neural networks attempt to simulate the way learning takes place in the brain, which is based on the gradual strengthening or weakening of the connections between neurons, known as synapses. The core component of this physical neural network is the resistive switch, whose electronic conductance can be controlled electrically. This control, or modulation, emulates the strengthening and weakening of synapses in the brain.

In neural networks using conventional silicon microchip technology, the simulation of these synapses is a very energy-intensive process. To improve efficiency and enable more ambitious neural network goals, researchers in recent years have been exploring a number of physical devices that could more directly mimic the way synapses gradually strengthen and weaken during learning and forgetting.

Most candidate analog resistive devices so far for such simulated synapses have either been very inefficient, in terms of energy use, or performed inconsistently from one device to another or one cycle to the next. The new system, the researchers say, overcomes both of these challenges. “We’re addressing not only the energy challenge, but also the repeatability-related challenge that is pervasive in some of the existing concepts out there,” says Yildiz, who is a professor of nuclear science and engineering and of materials science and engineering. 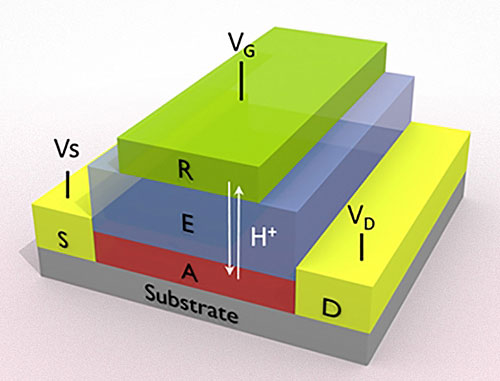 In the new simulated synapse, ions of hydrogen (protons), shown as H+, can migrate back and forth between a hydrogen reservoir material (R) and an active material (A), tungsten trioxide, passing through an electrolyte layer (E). The movement of the ions is controlled by the polarity and strength of a voltage applied through gold electrodes (S and D), and this in turn changes the electrical resistance of the device. thus simulating memory.

“I think the bottleneck today for building [neural network] applications is energy efficiency. It just takes too much energy to train these systems, particularly for applications on the edge, like autonomous cars,” says del Alamo, who is the Donner Professor in the Department of Electrical Engineering and Computer Science. Many such demanding applications are simply not feasible with today’s technology, he adds.

The resistive switch in this work is an electrochemical device, which is made of tungsten trioxide (WO3) and works in a way similar to the charging and discharging of batteries. Ions, in this case protons, can migrate into or out of the crystalline lattice of the material,  explains Yildiz, depending on the polarity and strength of an applied voltage. These changes remain in place until altered by a reverse applied voltage — just as the strengthening or weakening of synapses does.

“The mechanism is similar to the doping of semiconductors,” says Li, who is also a professor of nuclear science and engineering and of materials science and engineering. In that process, the conductivity of silicon can be changed by many orders of magnitude by introducing foreign ions into the silicon lattice. “Traditionally those ions were implanted at the factory,” he says, but with the new device, the ions are pumped in and out of the lattice in a dynamic, ongoing process. The researchers can control how much of the “dopant” ions go in or out by controlling the voltage, and “we’ve demonstrated a very good repeatability and energy efficiency,” he says.

Yildiz adds that this process is “very similar to how the synapses of the biological brain work. There, we’re not working with protons, but with other ions such as calcium, potassium, magnesium, etc., and by moving those ions you actually change the resistance of the synapses, and that is an element of learning.” The process taking place in the tungsten trioxide in their device is similar to the resistance modulation taking place in biological synapses, she says.

“What we have demonstrated here,” Yildiz says, “even though it’s not an optimized device, gets to the order of energy consumption per unit area per unit change in conductance that’s close to that in the brain.” Trying to accomplish the same task with conventional CMOS type semiconductors would take a million times more energy, she says.

The materials used in the demonstration of the new device were chosen for their compatibility with present semiconductor manufacturing systems, according to Li. But they include a polymer material that limits the device’s tolerance for heat, so the team is still searching for other variations of the device’s proton-conducting membrane and better ways of encapsulating its hydrogen source for long-term operations.

“There’s a lot of fundamental research to be done at the materials level for this device,” Yildiz says. Ongoing research will include “work on how to integrate these devices with existing CMOS transistors” adds del Alamo. “All that takes time,” he says, “and it presents tremendous opportunities for innovation, great opportunities for our students to launch their careers.”

The research, which included researchers at Brookhaven National Laboratory as well as MIT, was supported by the Skoltech Program, the MIT Quest for Intelligence, and the U.S. National Science Foundation.