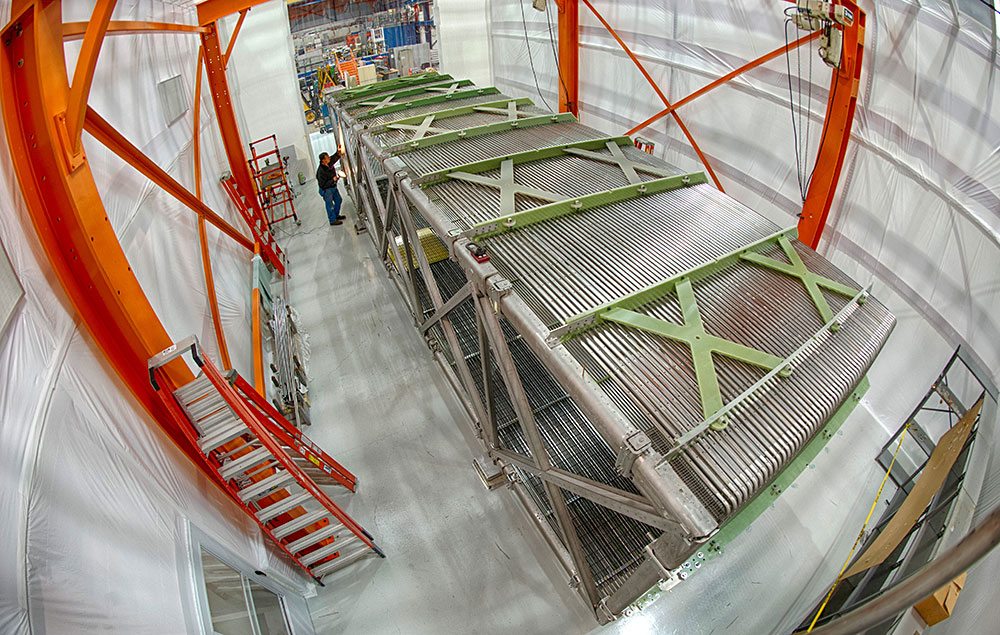 UPTON, NY—How do you spot a subatomic neutrino in a “haystack” of particles streaming from space? That’s the daunting prospect facing physicists studying neutrinos with detectors near Earth’s surface. With little to no shielding in such non-subterranean locations, surface-based neutrino detectors, usually searching for neutrinos produced by particle accelerators, are bombarded by cosmic rays—relentless showers of subatomic and nuclear particles produced in Earth’s atmosphere by interactions with particles streaming from more-distant cosmic locations. These abundant travelers, mostly muons, create a web of crisscrossing particle tracks that can easily obscure a rare neutrino event.

Fortunately, physicists have developed tools to tone down the cosmic “noise.”

A team including physicists from the U.S. Department of Energy’s Brookhaven National Laboratory describes the approach in two papers recently accepted to be published in Physical Review Applied and the Journal of Instrumentation (JINST). These papers demonstrate the scientists’ ability to extract clear neutrino signals from the MicroBooNE detector at DOE’s Fermi National Accelerator Laboratory (Fermilab). The method combines CT-scanner-like image reconstruction with data-sifting techniques that make accelerator-produced neutrino signals stand out 5 to 1 against the cosmic ray background.

“We developed a set of algorithms that reduce the cosmic ray background by a factor of 100,000,” said Chao Zhang, one of the Brookhaven Lab physicists who helped to develop the data-filtering techniques. Without the filtering, MicroBooNE would see 20,000 cosmic rays for every neutrino interaction, he said. “This paper demonstrates the crucial ability to eliminate the cosmic ray backgrounds.”

Bonnie Fleming, a professor at Yale University who is a co-spokesperson for MicroBooNE, said, “This work is critical both for MicroBooNE and for the future U.S. neutrino research program. Its impact will extend notably beyond the use of this ‘Wire-Cell’ analysis technique, even on MicroBooNE, where other reconstruction paradigms have adopted these data-sorting methods to dramatically reduce cosmic ray backgrounds."

Left: The MicroBooNE time projection chamber (TPC) being loaded into the container vessel. The photomultiplier tubes mounted at the back of the chamber (right) help to identify particle tracks generated by neutrinos in the TPC by detecting simultaneously generated flashes of light. Right: The MicroBooNE detector is lowered into the main cavern of the Liquid Argon Test Facility at Fermilab Credit: Fermilab

MicroBooNE is one of three detectors that form the international  Short-Baseline Neutrino program at Fermilab, each located a different distance from a particle accelerator that generates a carefully controlled neutrino beam. The three detectors are designed to count up different types of neutrinos at increasing distances to look for discrepancies from what’s expected based on the mix of neutrinos in the beam and what’s known about neutrino “oscillation.” Oscillation is a process by which neutrinos swap identities among three known types, or “flavors.” Spotting discrepancies in neutrino counts could point to a new unknown oscillation mechanism—and possibly a fourth neutrino variety.

Brookhaven Lab scientists played a major role in designing the MicroBooNE detector, particularly the sensitive electronics that operate within the detector’s super-cold liquid-argon-filled time projection chamber. As neutrinos from Fermilab’s accelerator enter the chamber, every so often a neutrino will interact with an argon atom, kicking some particles out of its nucleus—a proton or a neutron—and generating other particles (muons, pions) and a flash of light. The charged particles that get kicked out ionize argon atoms in the detector, knocking some of their electrons out of orbit. The electrons that form along these ionization tracks get picked up by the detector’s sensitive electronics.

“The whole trail of electrons drifts along an electric field and passes through three consecutive planes of wires with different orientations at one end of the detector,” Zhang said. “As the electrons approach the wires, they induce a signal, so that each set of wires creates a 2D image of the track from a different angle.”

Computers translate that timing into distance and piece together the 2D track images to reconstruct a 3D image of the neutrino interaction in the detector. The shape of the track tells scientists which flavor of neutrino triggered the interaction.

“This 3D ‘Wire-Cell’ image reconstruction is similar to medical imaging with a computed tomography (CT) scanner,” Zhang explained. In a CT scanner, sensors capture snapshots of the body’s internal structures from different angles and computers piece the images together. “Imagine the particle tracks going through the three wire planes as a person going into the scanner,” he said. 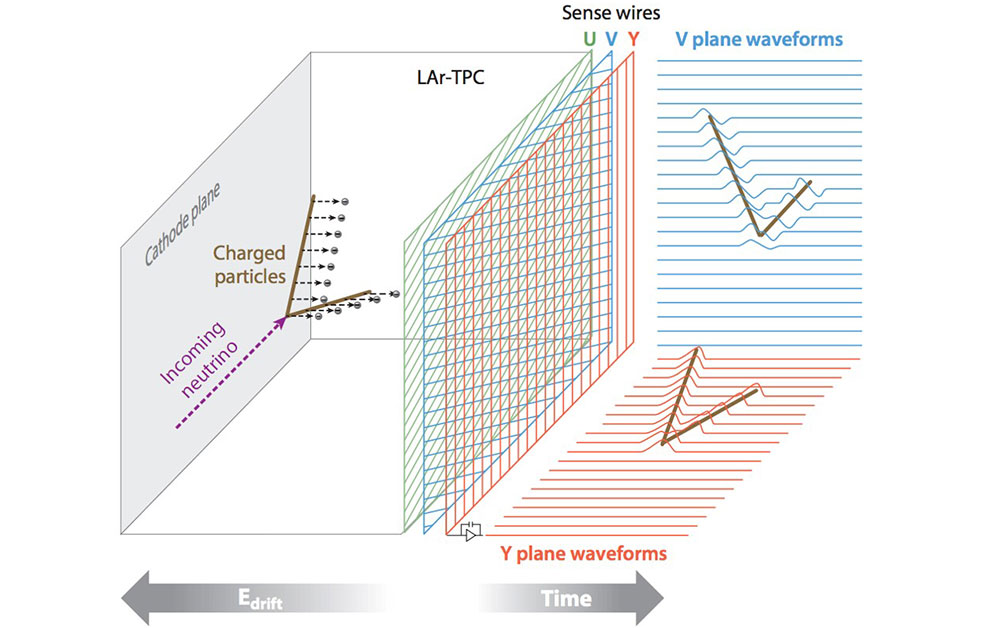 How the MicroBooNE detector works: The neutrino interaction creates charged particles and generates a flash of light. The charged particles ionize the argon atoms and create free electrons. The electrons drift toward the three wire planes under an external electric field and induce signals on the wires. The wires effectively record three images of the particle activities from different angles. The light flashes (photons) are detected by photomultiplier tubes behind the wire planes, which tells when the interaction happens. Scientists use the images from the three planes of wires and the timing of the interaction to reconstruct the tracks created by the neutrino interaction and where it occurred in the detector.

It sounds almost simple—if you forget about the thousands of cosmic rays that stream through the detector at the same time. Their ionization trails also drift through the scanning wires, creating images that look like a tangled web. That’s why MicroBooNE scientists have been working on sophisticated “triggers” and algorithms to sift through the data so they can extract the neutrino signals.

By 2017, they had made substantial progress reducing the cosmic ray noise. But even then, cosmic rays outnumbered neutrino tracks by about 200 to 1. The new papers describe further techniques to reduce this ratio, and flip it to the point where neutrino signals in MicroBooNE now stand out 5 to 1 against the cosmic ray background.

The first step involves matching the signals revealed by particles generated in neutrino interactions with the exact flashes of light picked up by the photomultiplier tubes from that interaction.

An example electron-neutrino event before and after applying the "charge-light" matching algorithm. A neutrino interaction is typically mixed with about 20 cosmic rays during the event recording of 4.8 milliseconds. After matching the neutrino interaction's "charge" signal, recorded by the wires, with its "light" signal, recorded by the photomultiplier tubes, it can be clearly singled out from the cosmic ray background. In the event display, the black points are from the electron-neutrino interaction and the colored points are the background cosmic rays. The size of each red circle shows the strength of the matched light signal for each photomultiplier tube.

Brooke Russell, who worked on the analysis as a Yale graduate student and is now a postdoctoral fellow at DOE’s Lawrence Berkeley National Laboratory, echoed these comments on the challenge of light-matching. “Given that the charge information is in some cases not fully complementary to the light information, there can be ambiguities in charge-light pairings on a single-readout basis. The algorithms developed by the team help to account for these nuances,” she said.

Still, the scientists must then compare the timing of each track with the time accelerator neutrinos were emitted (a factor they know because they control the accelerator beam). “If the timing is consistent, then it is a possible neutrino interaction,” Qian said.

The algorithm developed by the Brookhaven team brings the ratio down to one neutrino for every six cosmic ray events.

Rejecting additional cosmic rays gets a bit easier with an algorithm that eliminates tracks that completely traverse the detector.

“Most cosmic rays go through the detector from top to bottom or from one side to the other,” said Xiangpan Ji, a Brookhaven Lab postdoc working on this algorithm. “If you can identify the point of entry and exit of the track, you know it’s a cosmic ray. Particles formed by neutrino interactions have to start in the middle of the detector where that interaction takes place.”

That brings the ratio of neutrino interactions to cosmic rays to 1:1.

An additional algorithm screens out events that start outside the detector and get stopped somewhere in the middle—which look similar to neutrino events but move in the opposite direction. And one final fine-tuning step rules out events where the light flashes don’t match well with events, to bring the detection of neutrino events to the remarkable level of 5 to 1 compared with cosmic rays.

“This is one of the most challenging analyses I have worked on,” said Hanyu Wei, the Brookhaven Lab postdoctoral fellow leading the analysis effort. “The liquid-argon time projection chamber is a new detector technology with lots of surprising features. We had to invent many original methods. It was truly a team effort.”

Zhang echoed that sentiment and said, “We expect this work to significantly boost the potential for the MicroBooNE experiment to explore the intriguing physics at short baselines. Indeed, we’re looking forward to implementing these techniques in experiments at all three short-baseline neutrino detectors to see what we learn about neutrino oscillations and the possible existence of a fourth neutrino type.”