The following news release was recently issued by NYU Tandon School of Engineering. It describes research published in Nature on a fast, efficient method—carbon dioxide doping—to improve the electrical conductivity of an organic interlayer in solar cells with a “perovskite” crystal structure. Led by NYU associate professor André Taylor, the team conducted their research in part at the Center for Functional Nanomaterials (CFN), a U.S. Department of Energy Office of Science User Facility at Brookhaven National Laboratory. At the CFN Advanced Optical Spectroscopy and Microscopy Facility, the team performed steady-state photoluminescence spectroscopy experiments. The resulting spectra revealed that carbon dioxide can more effectively (as compared to oxygen) promote the doping of an organic semiconductor (spiro-OMeTAD) commonly used as a hole-transporting interlayer in perovskite solar cells. With the carbon dioxide treatment, the electrical conductivity of the interlayer was 100 times higher than that of an untreated interlayer and approximately five times higher than the interlayer obtained from the oxygen treatment.

A team led by investigators at NYU Tandon created a means of vastly increasing the speed and efficiency of a key doping process for perovskite solar cells, one that also sequesters CO2 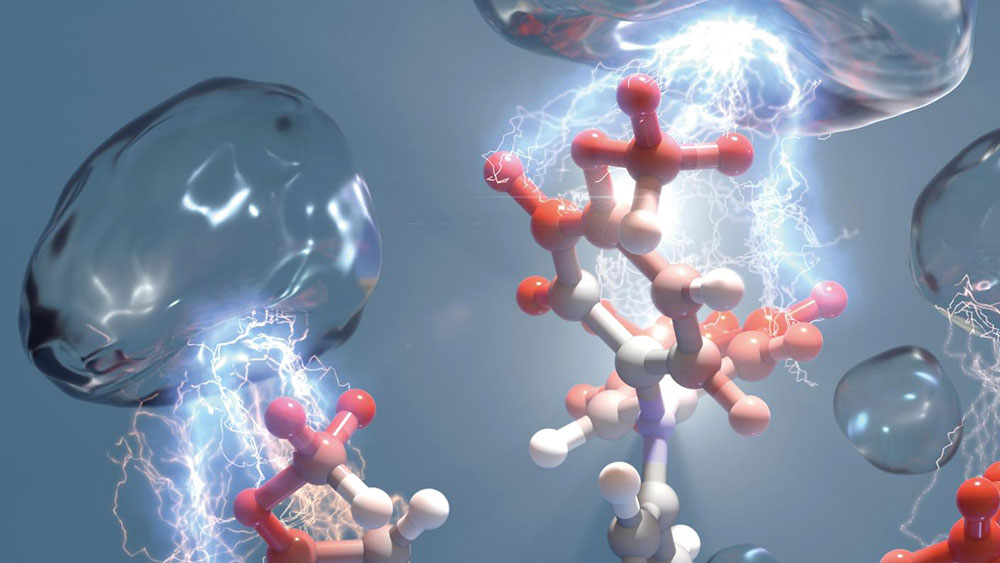 A team led by Prof. Andre Taylor at the NYU Tandon School of Engineering devised a fast, efficient means of p-doping key layers of perovskite-based solar cells through the use of CO2 bubbles.

BROOKLYN, New York, Wednesday, June 2, 2021 – Perovskite solar cells have progressed in recent years with rapid increases in power conversion efficiency (from 3% in 2006 to 25.5% today), making them more competitive with silicon-based photovoltaic cells. However, a number of challenges remain before they can become a competitive commercial technology.

Now a team at the NYU Tandon School of Engineering has developed a process to solve one of them, a bottleneck in a critical step involving p-type doping of organic hole-transporting materials within the photovoltaic cells. The research, “CO2 doping of organic interlayers for perovskite solar cells,” appears in Nature.

Currently, the p-doping process, achieved by the ingress and diffusion of oxygen into the hole transporting layer, is time intensive (several hours to a day), making commercial mass production of perovskite solar cells impractical.

The Tandon team, led by André D. Taylor, an associate professor, and Jaemin Kong, a post-doctoral associate, along with Miguel Modestino, assistant professor — all in the Department of Chemical and Biomolecular Engineering — discovered a method of vastly increasing the speed of this key step through the use of carbon dioxide (CO2) instead of oxygen.

In perovskite solar cells, doped organic semiconductors are normally required as charge-extraction interlayers situated between the photoactive perovskite layer and the electrodes. The conventional means of doping these interlayers involves the addition of lithium bis(trifluoromethane)sulfonimide (LiTFSI), a lithium salt, to spiro-OMeTAD, a π-conjugated organic semiconductor widely used for a hole-transporting material in perovskite solar cells. The doping process is then initiated by exposing spiro-OMeTAD:LiTFSI blend films to air and light.

Not only is this method time consuming, it largely depends on ambient conditions. By contrast, Taylor and his team reported a fast and reproducible doping method that involves bubbling a spiro-OMeTAD:LiTFSI solution with CO2 under ultraviolet light. They found that their process rapidly enhanced electrical conductivity of the interlayer by 100 times compared to that of a pristine blend film, which is also approximately 10 times higher than that obtained from an oxygen bubbling process. The CO2 treated film also resulted in stable, high-efficiency perovskite solar cells without any post-treatments.

“Besides shortening the device fabrication and processing time, application of the pre-doped spiro-OMeTAD in perovskite solar cells makes the cells much more stable,” explained Kong, the lead author. “That’s partly because most of the detrimental lithium ions in the spiro-OMeTAD:LiTFSI solution were stabilized as lithium carbonates during the CO2 bubbling process.”

He added that the lithium carbonates end up being filtered out when the investigators spincast the pre-doped solution onto the perovskite layer. “Thus, we can obtain fairly pure doped organic materials for efficient hole transporting layers.”

The team, which included researchers from Samsung, Yale University, Korea Research Institute of Chemical Technology, The Graduate Center of the City University, Wonkwang University, and the Gwangju Institute of Science and Technology also found that the CO2 doping method can be used for p-type doping of other π-conjugated polymers, such as PTAA, MEH-PPV, P3HT, and PBDB-T. According to Taylor the researchers are looking to push the boundary beyond typical organic semiconductors used for solar cells.

“We believe that wide applicability of CO2 doping to various π-conjugated organic molecules stimulates research ranging from organic solar cells to organic light emitting diodes (OLEDs) and organic field effect transistors (OFETs) even to thermoelectric devices that all require controlled doping of organic semiconductors,” Taylor explained, adding that since this process consumes quite a large amount of CO2 gas, it can be also considered for CO2 capture and sequestration studies in the future.

“At a time when governments and companies alike are now looking to reduce CO2 emissions if not de-carbonize, this research offers an avenue for reacting large amounts of CO2 in lithium carbonate to improve next generation solar cells, while removing this greenhouse gas from the atmosphere,” he explained, adding that the idea for this novel approach was a counterintuitive insight from the team’s battery research.

“From our long history of working with lithium oxygen/air batteries we know that lithium carbonate formation from exposure of oxygen electrodes to air is a big challenge because it depletes the battery of lithium ions, which destroys battery capacity. In this Spiro doping reaction, however, we are actually exploiting lithium carbonate formation, which binds lithium and prevents it from becoming mobile ions detrimental to the long term stability of the Perovskite solar cell. We are hoping that this CO2 doping technique could be a stepping stone for overcoming existing challenges in organic electronics and beyond.”

The U.S. National Science Foundation, the National Research Foundation of Korea, the China Scholarship Council, and the U.S. Department of Energy’s Center for Functional Nanomaterials at Brookhaven National Laboratory provided support for this research.

About the New York University Tandon School of Engineering

The NYU Tandon School of Engineering dates to 1854, the founding date for both the New York University School of Civil Engineering and Architecture and the Brooklyn Collegiate and Polytechnic Institute. A January 2014 merger created a comprehensive school of education and research in engineering and applied sciences as part of a global university, with close connections to engineering programs at NYU Abu Dhabi and NYU Shanghai. NYU Tandon is rooted in a vibrant tradition of entrepreneurship, intellectual curiosity, and innovative solutions to humanity’s most pressing global challenges. Research at Tandon focuses on vital intersections between communications/IT, cybersecurity, and data science/AI/robotics systems and tools and critical areas of society that they influence, including emerging media, health, sustainability, and urban living. We believe diversity is integral to excellence, and are creating a vibrant, inclusive, and equitable environment for all of our students, faculty and staff. For more information, visit engineering.nyu.edu.