An aerial view of the Relativistic Heavy Ion Collider

In a smooth 21st run at the Relativistic Heavy Ion Collider (RHIC), a U.S. Department of Energy (DOE) user facility for nuclear physics research at Brookhaven National Laboratory, scientists reached their goal to smash ions at the lowest—and most challenging—energy. And the STAR detector completed the targeted collection of data ahead of schedule.

An early wrap of the final phase of Beam Energy Scan II (BES-II) allowed time for STAR to grab important additional data as RHIC heads into the final years of its experimental program. After the completion of the RHIC physics program, some of RHIC’s foundational components will be used to construct a brand-new nuclear physics research facility—the Electron-Ion Collider (EIC).

“We exceeded our physics goals and took something extra for this year that wasn’t even on the original beam user request,” said Brookhaven physicist and STAR collaboration co-spokesperson Lijuan Ruan. “This outstanding run is thanks to a dedicated team and constant discussion between the Collider-Accelerator Department (C-AD) and STAR scientists, technicians, and engineers.” 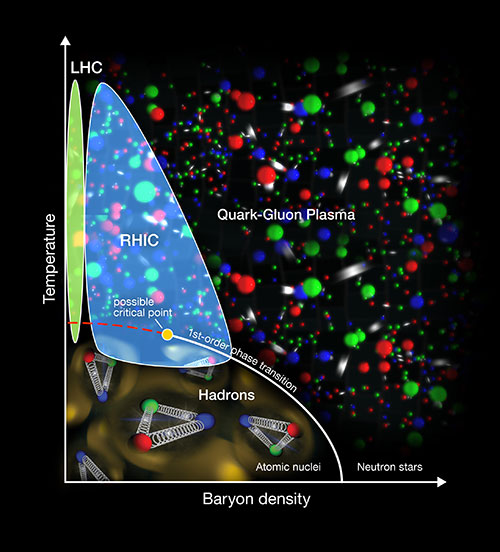 Mapping nuclear phase changes is like studying how water changes under different conditions of temperature and pressure (net baryon density for nuclear matter). RHIC's collisions "melt" protons and neutrons to create quark-gluon plasma (QGP). STAR physicists are exploring collisions at different energies, turning the "knobs" of temperature and baryon density, to look for signs of a "critical point." That's a set of conditions where the type of transition between ordinary nuclear matter and QGP changes from a smooth crossover observed at RHIC's highest energies (gradual melting) to an abrupt "first order" phase change that's more like water boiling in a pot.

First, physicists completed the last stage of BES-II, a three-year systematic study of what happens when gold ions—gold atoms stripped of their electrons—collide at various energies. The experiment successfully captured measurements from collisions at the lowest energy of 3.85 billion electron volts (GeV) per nucleon (proton or neutron). Scientists also successfully collected data from fixed-target runs at 44.5, 70, 100 GeV/nucleon.

The data collected using the STAR detector in this run could be key in the search for evidence of what nuclear physicists call the “critical point” in the transition of ordinary nuclear matter into a soup of free quarks and gluons, known as a quark-gluon plasma (QGP). This critical point marks a change in how that transition between the two phases happens.

Delivering intense colliding ion beams at low energies is a challenge. The lower the energy, the tougher it is to maintain the quality of the beam. But improvements in anticipation of and during the run helped maximize the chances of collisions happening when the beams crossed at the center of RHIC's STAR detector.

One ingredient to a successful BES-II finale: the Low Energy RHIC Electron Cooling (LEReC) system. This system injects cool beams of electrons into the stream of accelerated ions to extract some of the heat. That cooling helps counteract the ions’ tendency to spread out, thus keeping them compact and more likely to collide.

“All systems performed with high availability and reliability, and that was essential, without a doubt, to the success of the program,” said Michiko Minty, head of the Accelerator Division. “This run pushed the limits and was extraordinarily challenging because it had never been done before 2020. LEReC enabled science that could probably not otherwise have been done in a reasonable amount of time.” 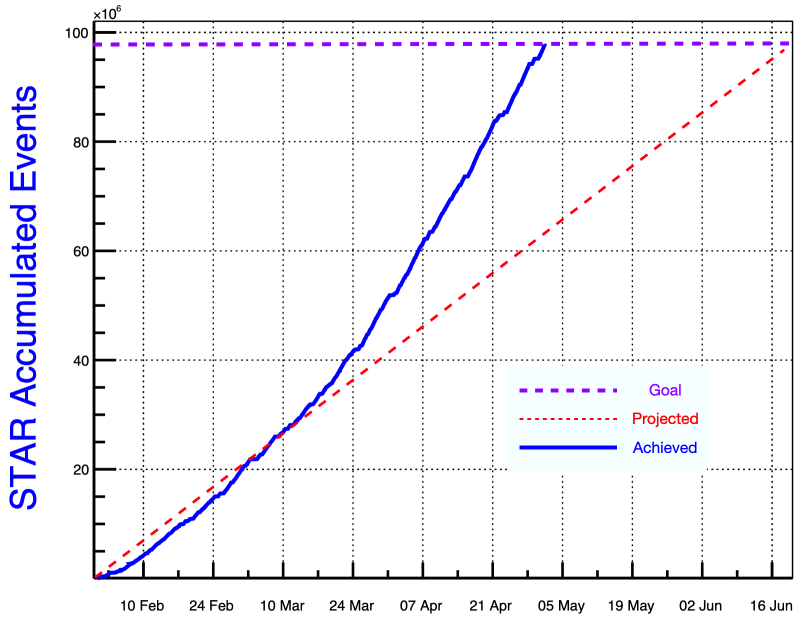 Physicists in the STAR experiment collaboration met their goal earlier than projected in RHIC Run 21 at the lowest energy of BES-II, reaching 98 million collisions in 13 weeks instead of the projected 20 weeks.

Application of the third-harmonic radio frequency (RF) cavities installed in the RHIC rings  raised the capacity to accommodate much higher beam intensity. These RF cavities create electromagnetic fields that help flatten the longitudional profile of the bunches to reduce the peak bunch intensity while keeping the ions tightly packed.

A bunch-by-bunch damper system also helped nudge spreading ion bunches back toward the center of the beam pipe.

“The collaboration between C-AD and STAR was extremely smooth,” said Brookhaven Lab accelerator physicist Chuyu Liu, the run coordinator. “We worked closely together to solve a few technical issues, resulting in performance improvements. We never stopped making improvements to the collider and LEReC and the beam injectors. When we look at data showing the performance during the run, we did better and better every day.”

COVID-19 also added to the challenge this year. But the collaboration members successfully navigated safety protocols and adjusted to a “new normal” with limited crews on site.

“C-AD delivered a good beam, which we used efficiently, and the detector worked well,” said STAR run coordinator J.H. Lee, “Everything was in harmony.”

With BES-II wrapped, physicists had beam time to devote to other priorities laid out in the proposed beam user request for Run 21. They also achieved an extra, but important, physics goal.

As one of the additional priorities for Run 21, physicists ran collisions between oxygen ions. Over RHIC’s lifetime, experiments have included collisions between a range of heavy ions with other heavy ions, heavy with light, and intermediate elements. The oxygen-on-oxygen collisions represent a new species combination for the RHIC program. Oxygen is an intermediate element that is relatively light—much lighter than gold ions, explained C-AD chair Wolfram Fischer. So this dataset offers another comparison to use in the quest for more information on the building blocks of matter.

In an exciting end to the run, RHIC scientists also had time for collisions between gold nuclei and deuterons—nuclei that consist of one proton and one neutron. Scientists will compare measurements collected in this run with data captured by the PHENIX and STAR detectors in previous deuteron-gold collisions, making use of significant upgrades in STAR that have taken place since.

This is especially important with four more years left before RHIC’s experimental program is set to close out to focus on the transition to the EIC.

"RHIC is in a state now where the end is visible,” Fischer said. “The available beam time becomes less and less over time and in that sense becomes more precious. We may never be able to repeat some things we do now.”

RHIC is funded by the DOE Office of Science.