Graphene in the News

Graphene research is a hot topic in the science world lately. This is evidenced by the announcement of the 2010 Nobel Prize in Physics, which was given to University of Manchester scientists Andre Geim and Konstantin Novoselov for producing and characterizing the first thin flake of graphene — a form of carbon just one atom thick. Since that development in 2004, Brookhaven researchers have made numerous advances in the graphene field. Below are some examples of their work:

Imagine watching a sports game that doesn’t show the players — you only see a changing score on a blank background. Most studies that examine moving electric charges on the carbon-based material called graphene detect only this score: they measure the charge carriers after they leave the graphene “field of play” itself, so researchers only “see” the tally of charges reaching their final destination but not the path they took to get there. To get a better look at graphene and its superior electrical properties, a group of Brookhaven Lab researchers figured out how to add a moving picture to scientists’ bleachers.

Some of graphene’s unique features come from its structure: a flat sheet, only one atom thick, of carbon atoms bonded together in a hexagonal pattern — like chicken wire laid flat. This structure creates a two-dimensional sheet of electrons, which enables a phenomenon called the quantum Hall effect (QHE).

In the QHE, graphene’s conductance — its ability to carry electrical current — becomes quantized. This quantization means that as researchers change the number of electrons by applying voltage to the system, the conductance increases in set increments. 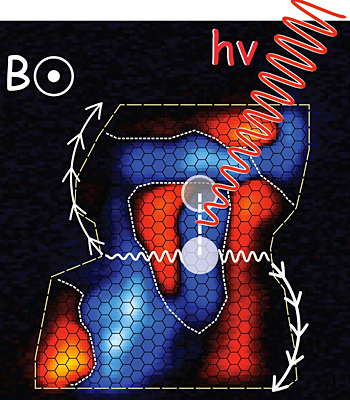 Scanning a focused laser beam across a graphene transistor held at low temperature in a high magnetic field (B), the transport pathways of quantized charge carriers in the entire device can be mapped by photocurrent microscopy

In other words, the quantization manifests as a step-pattern: conductance remains at a plateau despite the increase in voltage, but then abruptly jumps up to a higher level, like stepping up a staircase. Each plateau represents a “Landau level,” the energy level of the electron’s orbital state in a high magnetic field.

The very characteristics of graphene that enable the QHE also could let engineers create tiny, fast, graphene-based electronic devices. To pave the way to such future applications of graphene however, scientists need to better understand the transport of electrons in graphene.

In order to expand their picture of the graphene conductance “game,” researchers need to probe the movements of charges in the material, which determine conductance. A Brookhaven research team at the Center for Functional Nanomaterials, led by Peter Sutter, found a new technique to do this. Their results were published in the August 22, 2010 edition of Nature Physics. 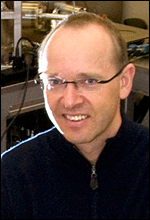 Using the new method, the BNL team identified the reason for puzzling deviations from the predicted quantized conductance in graphene devices. As Sutter’s team discovered, extra conducting streams not considered by the current model of the QHE add to graphene’s overall conductance.

“The first application is that we can now truly understand why the conductance is not following the rule,” Sutter said.

The opening of additional streams of current is caused by band bending, variations of the energy of charges within the graphene device. Instead of remaining fairly constant across the width of a graphene channel, Landau levels bend up and down depending on a charge carrier’s position in the device.

Based on this information, Sutter asks a new question: What causes these derivations from ideal behavior? Why does band bending occur in graphene?

In other systems restricting the flow of electrons to a two-dimensional plane, the electrons are removed from the surface of the material, isolating them from contaminants in the air. But in graphene — a material that consists only of two surfaces with no bulk in between — the electrons are strongly affected by any molecules binding to the surface, which might influence the charge carriers’ movements and ultimately, the Landau levels, Sutter said.

“Everything is extremely sensitive to very small perturbations,” he explained.

The researchers will continue to pursue the answers to these questions as well as investigate other unusual properties of graphene. Taking images of photocurrent, Sutter and his team have added a picture to a game that once gave merely the score.

“Traditionally, you’re blind to what’s happening on the playing field,” Sutter said. “Now we can follow which players are the most active, and how the ball reaches the goal.”

This study was funded by the U.S. Department of Energy (DOE) Office of Science and the National Science Foundation (NSF).