The researchers cited in this article used x-ray crystallography at NSLS beamlines X4C and X6A. 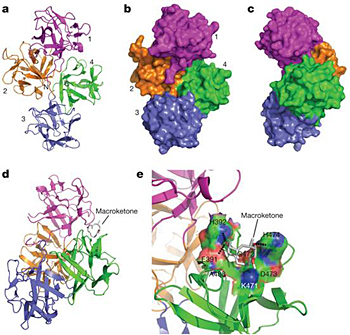 Like microscopic inchworms, cancer cells slink away from tumors to travel and settle elsewhere in the body. Now, researchers at Weill Cornell Medical College report in the journal Nature that new anti-cancer agents break down the looping gait these cells use to migrate, stopping them in their tracks.

Mice implanted with cancer cells and treated with the small molecule macroketone lived a full life without any cancer spread, compared with control animals, which all died of metastasis. When macroketone was given a week after cancer cells were introduced, it still blocked greater than 80 percent of cancer metastasis in mice.

These findings provide a very encouraging direction for development of a new class of anti-cancer agents, the first to specifically stop cancer metastasis, says the study’s lead investigator, Dr. Xin-Yun Huang, a professor in the Department of Physiology and Biophysics at Weill Cornell Medical College.

“More than 90 percent of cancer patients die because their cancer has spread, so we desperately need a way to stop this metastasis,” Dr. Huang says. “This study offers a paradigm shift in thinking and, potentially, a new direction in treatment.”

Dr. Huang and his research team have been working on macroketone since 2003. Their work started after researchers in Japan isolated a natural substance, dubbed migrastatin, secreted by Streptomyces bacteria, that is the basis of many antibiotic drugs. The Japanese researchers noted that migrastatin had a weak inhibitory effect on tumor cell migration.

Dr. Huang and collaborators at the Memorial Sloan-Kettering Cancer Center then proceeded to build analogues of migrastatin — synthetic and molecularly simpler versions.

“After a lot of modifications, we made several versions that were a thousand-fold more potent than the original,” Dr. Huang says.

In 2005, they published a study showing that several of the new versions, including macroketone, stopped cancer cell metastasis in laboratory animals, but they didn’t know how the agent worked.

In the current study, the researchers revealed the mechanism. They found that macroketone targets an actin cytoskeletal protein known as fascin that is critical to cell movement. In order for a cancer cell to leave a primary tumor, fascin bundles actin filaments together like a thick finger. The front edge of this finger creeps forward and pulls along the rear of the cell. Cells crawl away in the same way that an inchworm moves. Macroketone latches on to individual fascin, preventing the actin fibers from adhering to each other and forming the pushing leading edge, Dr. Huang says. Because individual actin fibers are too soft when they are not bundled together, the cell cannot move. The new animal experiments detailed in the study confirmed the power of macroketone. The agent did not stop the cancer cells implanted into the animals from forming tumors or from growing, but it completely prevented tumor cells from spreading, compared with control animals, he says. Even when macroketone was given after tumors formed, most cancer spread was blocked.

“This suggests to us that an agent like macroketone could be used to both prevent cancer spread and to treat it as well,” Dr. Huang says. “Of course, because it has no effect on the growth of a primary tumor, such a drug would have to be combined with other anti-cancer therapies acting on tumor cell growth.”

Also pleasing was the finding that the mice suffered few side effects from the treatment, according to Dr. Huang. “The beauty of this approach is that fascin is over-expressed in metastatic tumor cells but is only expressed at a very low level in normal epithelial cells, so a treatment that attacks fascin will have comparatively little effect on normal cells — unlike traditional chemotherapy which attacks all dividing cells,” he says.

Dr. Huang and his colleagues reported another key finding in the same Nature paper — on x-ray crystal structures of fascin and of the complex of fascin and macroketone. They demonstrated how macroketone blocks the activity of fascin. The images showed precisely how macroketone snugly nestles into a pocket of fascin affecting the way it regulates actin filament bundling.

“The molecular snapshots provide an approach for rational drug design of other molecules inhibiting the function of fascin, the therapeutic target,” says Dr. Huang. This work was funded by the U.S. National Institutes of Health and the Department of Defense.