The following feature story was originally published by the Atmospheric System Research (ASR) program and the Atmospheric Radiation Measurement (ARM) user facility of the U.S. Department of Energy’s Office of Science.

Chongai Kuang: Up, Up, and Away in Search of Aerosol Data

A Brookhaven National Laboratory atmospheric scientist, with stops in Texas and Alabama, continues his research into aerosol formation and growth 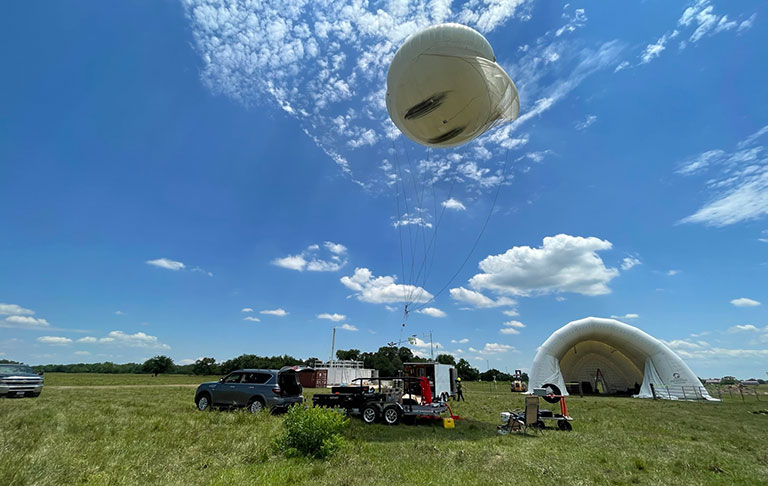 One June afternoon in 2022, on a patch of green pasture in rural Guy, Texas, atmospheric scientist Chongai Kuang looked up into a pale blue sky.

Nearby, a white tethered balloon the size of a sedan danced on a slim tether. It eased into the humid air, powered by a winch mounted on a flatbed trailer.

The balloon and winch are the main parts of an atmospheric science measurement strategy called tethered balloon systems (TBS).

Like dozens of other scientists over the course of a year, Kuang was in the Houston, Texas, area as part of a comprehensive, multi-agency campaign to study the origins of storms. The TRacking Aerosol Convection interactions ExpeRiment (TRACER), a yearlong exercise, will wrap up in September 2022. It’s conducted by Atmospheric Radiation Measurement (ARM), a U.S. Department of Energy (DOE) Office of Science user facility.

While Kuang looked on, the tether unwound with a yuh-yuh-yuh sound, like a car starting on a cold day. This seeming giant egg, steadied by a sail-like tail, hovered, dancing on a light breeze. A bulbous dark shadow swung across the ground. The balloon rose slowly. Its terminal research height was 1.5 kilometers about nine-tenths of a mile.

Instruments dangled beneath. Kuang, a scientist at Brookhaven National Laboratory in New York, had added some of them to the tethered array. He studies how atmospheric aerosols form and grow.

These ultrafine particles waft into the sky from land and sea sources and also form within the atmosphere itself. Collectively, aerosols influence cloud formation, precipitation, and how sunlight is scattered and absorbed. Though tiny, they impact the solar radiation that determines half the energy budget of the Earth.

In this video, Brookhaven National Laboratory atmospheric scientist Chongai Kuang describes his path to chemistry in a global-scale laboratory.

A Man of Many Projects

Kuang’s TBS research flights in Guy are in support of TRACER, as well as a 2021-2023 ASR science focus area (SFA) called PASCCALS. That stands for Process-level AdvancementS of Climate through Cloud and Aerosol Lifecycle Studies. He is a co-investigator.

PASCCALS, a research collaboration between Brookhaven and Argonne National Laboratory, addresses the need for a deeper understanding of how cloud and aerosol processes evolve. That’s important to improving the predictive acuity of climate change models.

One of the SFA’s five science themes focuses on Kuang’s main research interest: how new particle formation impacts the concentration of atmospheric aerosols as they grow to sizes where they could become cloud condensation nuclei (CCN). 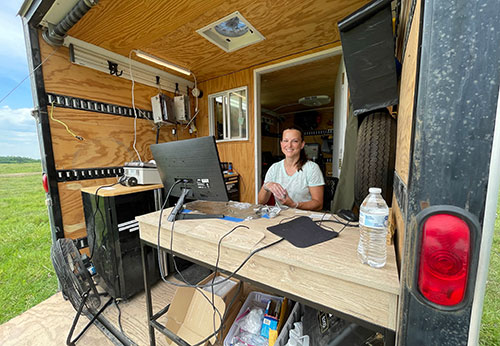 Data from TBS systems at Guy, Texas, "will be used for a long time," says Darielle "Dari" Dexheimer of Sandia National Laboratories in New Mexico. At the Guy site, she keeps an eye on operations from an open-air office enclosure. Photo by Jundt.

Data from Kuang’s TBS research will provide insights into boundary-layer controls, including the influence of sea breezes on cloud formation.

In Guy, Kuang is also leading his own four-month campaign on vertically resolved new particle formation. TRACER-VNATS investigates the formation of freshly nucleated particles as small as 1 nanometer in diameter.

Such particles, in clusters, can greatly contribute to the global prevalence of aerosol and CCN. Yet data on the vertical profiles of such clusters from aerial platforms are rare.

A String of Instruments

Guy is a farm town an hour southwest of Houston. It has a filling station and a post office. Guy also has relatively pristine air, which provides TRACER researchers a data counterpart to Houston’s polluted air.

Both research locations, as well as Houston-area places with big sea-breeze influences, are an important part of TRACER’s mission: to investigate the influence of aerosols and environmental thermodynamics on convective storms.

Kuang watched one launch from a spot of shade. A bright yellow helmet was tipped back on one of his signature ball caps, its brim as straight as a ruler.

“The plan is to do a profile to just below the cloud base,” he explains, “then come back down.”

The tethered balloon trails a string of instruments that send signals back to the surface as they pass through a column of air. The instruments measure a telltale variety of atmospheric properties, including concentrations of cloud-forming aerosols.

Data ‘for a Long Time’ 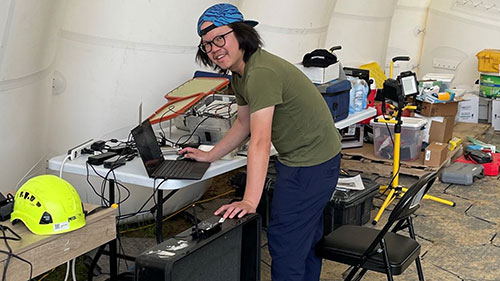 When visiting Guy, Texas, Kuang sets up shop in an inflatable tethered balloon hangar. During a June 2022 visit, his instruments measured atmospheric particles over multiple launches. Photo is courtesy of Jundt.

Highest among the instruments is an anemometer. Looking like a crossbeam, it measures horizontal and vertical windspeed.

Next is a particle counter from Kuang’s Brookhaven workshop. About the size of a cigar box, it measures newly formed particles down to a diameter of around 1 nanometer. The device reflects his interest in how such tiny atmospheric particles form from the gas-phase and grow to become potential CCN.

Below that, in order, are a TBS communications module, a portable optical particle spectrometer (POPS), then another TBS condensation particle counter. It measures particles down to 10 nanometers in diameter.

Along the length of the tether is a distributed temperature-sensing fiber, which takes a reading every 0.25 meters (19 inches or so).

In all, such data “will be used for a long time,” says Darielle “Dari” Dexheimer of Sandia National Laboratories in New Mexico, who is ARM’s TBS systems mentor. “Right now, there’s no way to get these kind of aerosol profiles (or) even count the particles at the altitudes we’re operating at.”

Later, she adds, careful analysis in a laboratory setting will record “how many (particles there are) and what they are made of and how they behave in the atmosphere.”

Launches at the Guy site are several times a day.

“The TBS team is helping me execute my science,” says Kuang. “I am a passenger on their platform. If the TBS doesn’t fly, I don’t either.”

He sets up shop in a towering inflatable structure that looks like an upended white raft. What locals call “the igloo” shelters the balloon and related equipment when not in use.

Data from his TBS instruments will provide insights into boundary-layer controls on aerosol formation and growth, which include the influence of sea breezes on cloud formation. 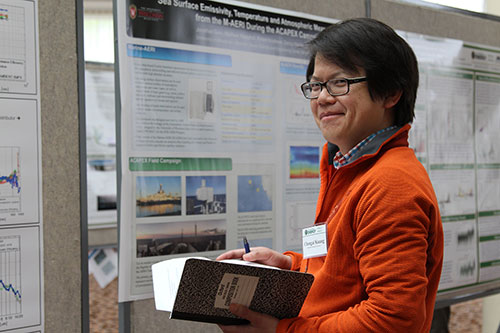 The work continues a fascination with measuring and modeling new particle formation that Kuang developed at the University of Minnesota-Twin Cities (PhD 2009) and refined further in a 114-page dissertation on atmospheric nucleation.

He notes his dissertation was “on the short side,” compared to those of his classmates. But in 2012, it garnered the prestigious Sheldon K. Friedlander Thesis Award from the American Association of Aerosol Research. The citation remarked on the work’s “elegant, theoretical descriptions of key processes.”

By then, Kuang had finished a 2009-2011 postdoc at Brookhaven and had begun his ascent to the rank of scientist attained in 2016.

Kuang was born in Singapore, and grew up in a suburb of San Jose, California. His father, now retired, used his background in physics to become a software engineer. His mother was a homemaker, helping to raise his two older brothers (both scientists) and a younger sister (an elementary school teacher).

The young Kuang first aspired to be a “small business owner of some kind,” he says, based on an aptitude test once he took.

At the same time, Kuang was taking four years of Latin (all forgotten now, he says) at a Jesuit high school. The experience inspired him to lead a life of service by way of the seminary, “something that was kind of important to me growing up,” says Kuang. “Now I am serving a global community.”

He entered the University of California, Berkeley (B.S., 2004) to pursue a double major in chemical engineering and chemistry.

Four years later, Kuang went on to graduate work in Minnesota as a National Science Foundation fellow. He discovered that all his first choices for research groups were full.

“I was a free agent, so to speak,” says Kuang, who then signed on with Peter H. McMurry, a veteran of research work with DOE and ASR. “That’s how I got into atmospheric science and aerosol science.”

On to a ‘Natural Laboratory’ 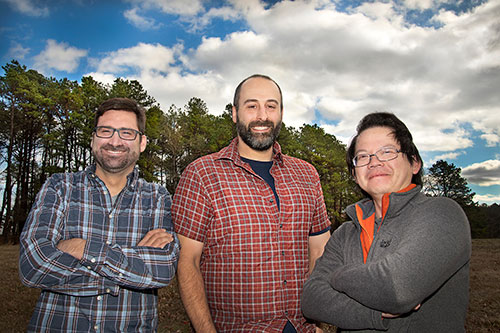 Chongai Kuang, pictured at the far right in pre-pandemic March 2020, worked with two Brookhaven colleagues to select a new site in the southeastern United States for the third ARM Mobile Facility (AMF-3). At left is associate ecologist Shawn Serbin. In the middle is meteorologist Scott Giangrande.

On the other hand, “I still feel very close to it,” he says. “In chemical engineering, you’re working on industrial systems and looking at the transfer of heat, energy, and momentum. Here, we are doing the same thing, but on a global scale.

All the same lessons of thermodynamics and chemistry and physics “transfer directly to this natural laboratory,” says Kuang.

Along on his explorations of world cuisines is Kuang’s wife, Anyi Hsueh, a psychiatric nurse practitioner.

Kuang’s natural laboratory will soon include an observatory in the interior of the stormy southeastern United States.

Kuang is one of three topical-area science leads for the site and will focus on aerosols. Two Brookhaven colleagues, ecologist Shawn Serbin and meteorologist Scott Giangrande, will focus on land-atmosphere interactions and convection, respectively.

Until the summer of 2021, the weather-hardened AMF-3 was on a long-term deployment at an ARM site in Oliktok, Alaska.

During its anticipated five-year mission in the Southeast, the mobile observatory’s instruments will record a broad array of data, including biogenic emissions, land-atmosphere coupling, and how regional clouds transition from shallow to convective. 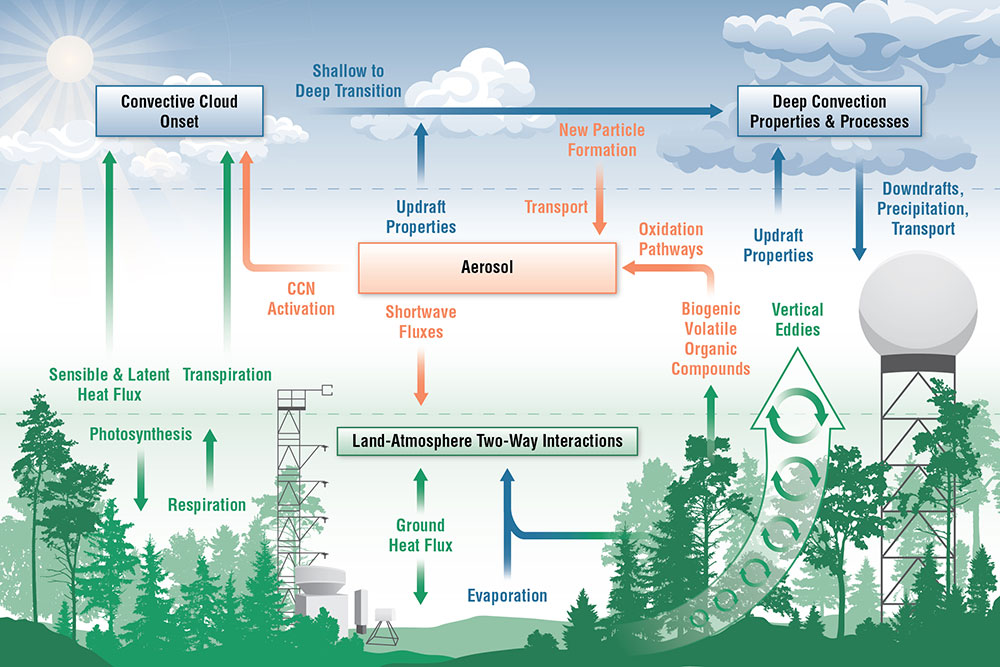 The AMF-3 observatory in Alabama, once up and running in 2023, will capture many properties and processes linked to land-atmosphere interactions, aerosols, and convective storms.

While a new TBS launch is getting ready, Kuang paused to reflect on the Alabama research site and the lessons TRACER has imparted and continues to impart.

“I see a number of parallels,” he says despite how different coastal and urban Houston is to Bankhead National Forest, which is tucked into rural terrain miles from the ocean.

One strong parallel is convective activity, though the severe weather has different origins.

Another is the idea of an “ancillary” observatory, which complements a main one.

One more parallel is the idea of distributed systems of instruments, designed to capture the atmospheric heterogeneity of a region, says Kuang. “We are working towards having a similar capacity in northern Alabama.”

Then there is the foundational principle that guides most ARM and ASR field work, deployments, and fixed and mobile observatories: Engagement.

That includes engagement with residents, local scientists, and “the broader science community,” says Kuang. “We are not gatekeepers of a site or data, but ambassadors and advocates.”

This work was supported by the U.S. Department of Energy’s Office of Science, through the Biological and Environmental Research program as part of the Atmospheric System Research program.