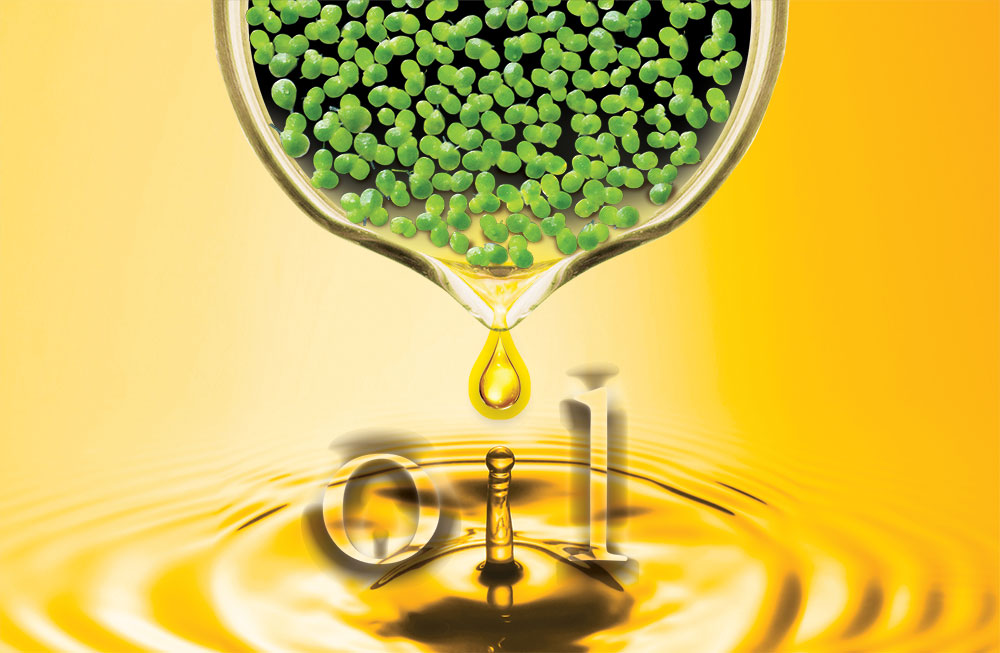 Brookhaven biochemists engineered duckweed, an aquatic plant, to produce large quantities of oil. If scaled up the approach could produce sustainable bio-based fuel without competing for high-value croplands while also potentially cleaning up agricultural wastewater.

UPTON, NY—Scientists at the U.S. Department of Energy’s Brookhaven National Laboratory and collaborators at Cold Spring Harbor Laboratory (CSHL) have engineered duckweed to produce high yields of oil. The team added genes to one of nature’s fastest growing aquatic plants to “push” the synthesis of fatty acids, “pull” those fatty acids into oils, and “protect” the oil from degradation. As the scientists explain in a paper published in Plant Biotechnology Journal, such oil-rich duckweed could be easily harvested to produce biofuels or other bioproducts.

The paper describes how the scientists engineered a strain of duckweed, Lemna japonica, to accumulate oil at close to 10 percent of its dry weight biomass. That’s a dramatic, 100-fold increase over such plants growing in the wild—with yields more than seven times higher than soybeans, today’s largest source of biodiesel. 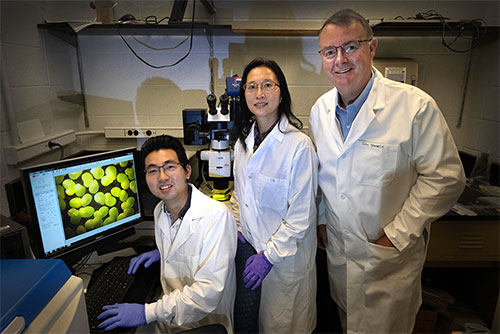 “Duckweed grows fast,” said Brookhaven Lab biochemist John Shanklin, who led the team. “It has only tiny stems and roots—so most of its biomass is in leaf-like fronds that grow on the surface of ponds worldwide. Our engineering creates high oil content in all that biomass.

“Growing and harvesting this engineered duckweed in batches and extracting its oil could be an efficient pathway to renewable and sustainable oil production,” he said.

Two added benefits: As an aquatic plant, oil-producing duckweed wouldn’t compete with food crops for prime agricultural land. It can even grow on runoff from pig and poultry farms.

“That means this engineered plant could potentially clean up agricultural waste streams as it produces oil,” Shanklin said.

The current project has roots in Brookhaven Lab research on duckweeds from the 1970s, led by William S. Hillman in the Biology Department. Later, other members of the Biology Department worked with the Martienssen group at Cold Spring Harbor to develop a highly efficient method for expressing genes from other species in duckweeds, along with approaches to suppress expression of duckweeds’ own genes, as desired.

As Brookhaven researchers led by Shanklin and Jorg Schwender over the past two decades identified the key biochemical factors that drive oil production and accumulation in plants, one goal was to leverage that knowledge and the genetic tools to try to modify plant oil production. The latest research, reported here, tested this approach by engineering duckweed with the genes that control these oil-production factors to study their combined effects. 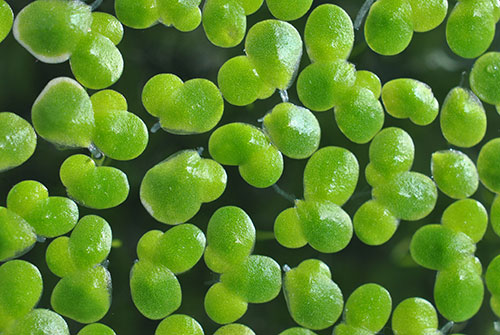 Microscope image of duckweed shows the frond structure, with each frond measuring approximately three millimeters across.

One of the oil-production genes identified by the Brookhaven researchers pushes the production of the basic building blocks of oil, known as fatty acids. Another pulls, or assembles, those fatty acids into molecules called triacylglycerols (TAG)—combinations of three fatty acids that link up to form the hydrocarbons we call oils. The third gene produces a protein that coats oil droplets in plant tissues, protecting them from degradation.

From preliminary work, the scientists found that increased fatty acid levels triggered by the “push” gene can have detrimental effects on plant growth. To avoid those effects, Brookhaven Lab postdoctoral researcher Yuanxue Liang paired that gene with a promoter that can be turned on by the addition of a tiny amount of a specific chemical inducer.

“Adding this promoter keeps the push gene turned off until we add the inducer, which allows the plants to grow normally before we turn on fatty acid/oil production,” Shanklin said.

Liang then created a series of gene combinations to express the improved push, pull, and protect factors singly, in pairs, and all together. In the paper these are abbreviated as W, D, and O for their biochemical/genetic names, where W=push, D=pull, and O=protect. 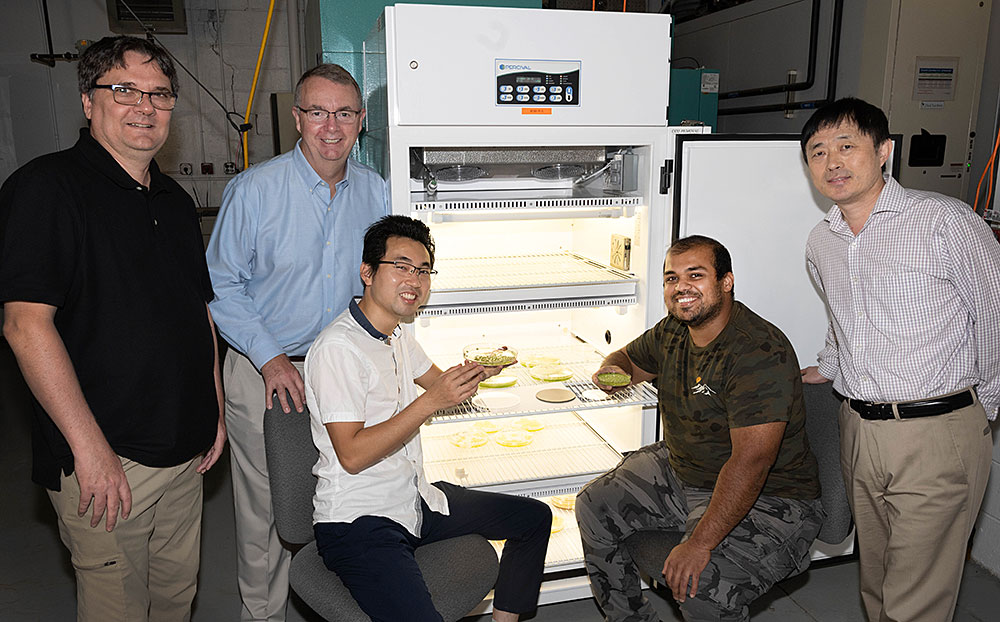 Overexpression of each gene modification alone did not significantly increase fatty acid levels in Lemna japonica fronds. But plants engineered with all three modifications accumulated up to 16 percent of their dry weight as fatty acids and 8.7 percent as oil when results were averaged across several different transgenic lines. The best plants accumulated up to 10 percent TAG—more than 100 times the level of oil that accumulates in unmodified wild type plants.

Some combinations of two modifications (WD and DO) increased fatty acid content and TAG accumulation dramatically relative to their individual effects. These results are called synergistic, where the combined effect of two genes increased production more than the sum of the two separate modifications. 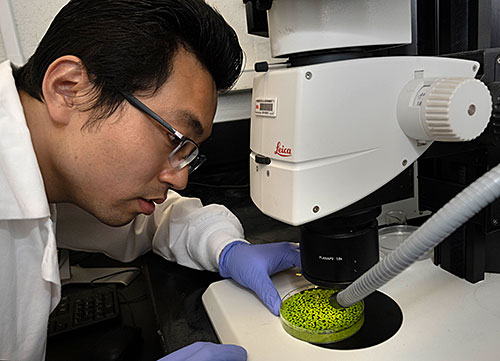 These results were also revealed in images of lipid droplets in the plants’ fronds, produced using a confocal microscope at the Center for Functional Nanomaterials (CFN), a DOE Office of Science user facility at Brookhaven Lab. When the duckweed fronds were stained with a chemical that binds to oil, the images showed that plants with each two-gene combination (OD, OW, WD) had enhanced accumulation of lipid droplets relative to plants where these genes were expressed singly—and also when compared to control plants with no genetic modification. Plants from the OD and OWD lines both had large oil droplets, but the OWD line had more of them, producing the strongest signals.

“Future work will focus on testing push, pull, and protect factors from a variety of different sources, optimizing the levels of expression of the three oil-inducing genes, and refining the timing of their expression,” Shanklin said. “Beyond that we are working on how to scale up production from laboratory to industrial levels.”