Brookhaven National Laboratory has been awarded $990,000 to further investigate the unique interaction between certain nano-structured coatings when used on steels and titanium alloys for next-generation nuclear reactors. 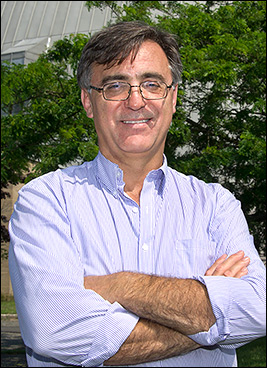 In collaboration with Rutgers University, the three-year project will provide important material-related information for the design of next-generation high temperature and “fast neutron” reactors, which will operate under higher temperatures and higher irradiation rates than those in operation today.

Nick Simos, a senior scientist with BNL’s Nuclear Sciences Department, will be the principal investigator on the research project, one of 13 awarded a total of $10.9 million through the Department of Energy’s Nuclear Energy Enabling Technologies program, designed to enable cross-cutting research that will fundamentally improve the safety and performance of nuclear reactors.

The project, one of several discovery-to-deployment initiatives, is a result of the long-term strategy put in place as part of BNL’s Blueprint. Radiation-induced degradation of the properties of materials used in nuclear reactors has been a subject of research for several decades. The same neutron activity that creates energy in the reactor also causes damage to its components, affecting the plant’s efficiency and cost-effectiveness, as well as safety. The next generation of nuclear reactors will operate with higher temperatures – in the neighborhood of 1000 degrees Celsius – and higher fluxes, leading to higher radiation rates, and accelerated degradation of key properties of the substrate materials in a nuclear reactor core. 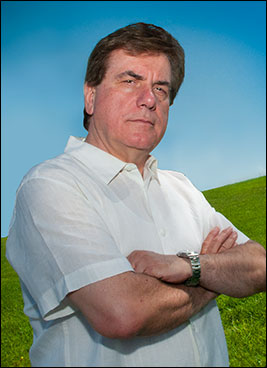 Through a series of irradiation and high temperature experiments conducted at BNL, Simos and his co-workers have confirmed that applying nano-structured coatings of specific materials – amorphous iron, aluminum, titanium and combinations of those – enhances their ability to resist radiation damage. But the mechanism behind this phenomenon is not yet understood. Simos and his team, which includes Professors Thomas Tsakalakos and Koray Akdogan of Rutgers University and Simerjeet Gill of BNL’s Nuclear Sciences Department, will use the Brookhaven Linac Isotope Producer (BLIP) to simulate the effects of radiation on the materials, since the Lab has no nuclear reactors still in operation. Following irradiation, researchers will use the National Synchrotron Light Source (NSLS) and the Center for Functional Nanomaterials to understand the mechanisms that govern the unique interaction of these nanostructures with neutron irradiation and study how they are either resisting damage or repairing it.

Studies of these materials have been ongoing for the past several years. The nano-coatings themselves are being provided by the team from Rutgers University. Simos created special samples that were exposed to radiation at the target space of BLIP, which utilizes the Linac beam to generate isotopes, and a spallation neutron source. The damage-resisting properties of the amorphous iron as well as of alumina and titania nano-structures were hinted at from previous studies and observations made at the macroscale at the BNL hot lab facility. Studies on the mechanical performance of these nanocoatings in unirradiated state have been conducted by the Rutgers University team at the NSLS beamline.

“The amorphous iron nano-coatings revealed some very interesting results that appear to go against the anticipated outcomes,” Simos said. “For example, we want materials to maintain their ductility – they should stretch and become like a plastic for a while before they fail outright. Without the nano-coating, the base materials or substrate will experience severe ductility loss, that’s one of the effects of radiation. It’s a serious issue for nuclear reactors — trying to understand and quantify for the different materials and different levels of radiation what the effects are and how we can predict what the ductility loss will be during the years of operation of the facility.”

Simos and his team will also study nano-coatings of ceramics like alumina, titania, and combinations of those materials.

“These appear to also have tremendous resistance and effective enhancement of the substrate,” Simos said. “When you have materials like that, you expect that because of their structure there are certain mechanisms that take place when you stretch or compress them with a heavy load. Because the ceramic coating cannot extend as well as the metal substrate, the big concern in extreme environments is that the two may separate because they do not expand the same way. But there is a kinking that takes place, a readjustment of the lattice that may provide additional give to the substrate. The materials appear to hold together without any signs of separation, even in extreme temperatures.”

Simos and his team will seek to fully understand the extent of the potential of these nano-coatings at a range of temperatures.

“The big concern is that as we get to high temperatures, the forces that exist in the interface of the two lattices are tremendous,” he said. “We’re trying to figure out exactly what that means relative to radiation level and temperature conditions.”

To accomplish this, the researchers will examine the mechanics of the interfaces between nano-coatings and substrates at the NSLS.

“There are challenges in terms of the level of activity that specimens can have in order to be explored at the NSLS using the beamlines,” Simos said. “But the process will reveal itself. We want to see what mechanics take place in the microscale rather than the macroscale, so that we observe the whole effect. That is the goal of doing these studies at the NSLS.”