Quark Matter’s Connection with the Higgs

You may think you’ve heard everything you need to know about the origin of mass. After all, scientists colliding protons at the Large Hadron Collider (LHC) in Europe recently presented stunning evidence strongly suggesting the existence of a long-sought particle called the Higgs boson, thought to “impart mass to matter.” But while the Higgs particle may be responsible for the mass of fundamental particles such as quarks, quarks alone can’t account for the mass of most of the visible matter in the universe—that’s everything we see and sense around us. 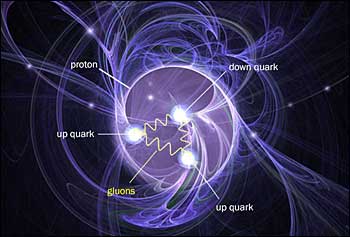 The three valence quarks that make up each proton account for about one percent of its mass; the rest comes from interactions among the quarks and gluons.

To get a grasp on what holds these visible forms of matter together—everything from stars to planets to people—you have to understand how quarks and gluons interact. That’s the essence of quark matter physics—and the Quark Matter 2012 international conference, taking place in Washington, D.C., August 12-18.

“We’re studying the 99 percent of the mass of the visible universe that isn’t explained by the Higgs,” says Peter Steinberg, a physicist at the U.S. Department of Energy’s Brookhaven National Laboratory and a keen participant in the Quark Matter conference.

Visible matter, he explains, is everything made of atoms, which get their mass mainly from the protons and neutrons that make up atomic nuclei. The electrons orbiting around the nucleus contribute practically nothing. But the protons and neutrons, each made of three quarks, are much more massive than the sum of their constituent particles. Where does all the “extra” mass come from?

The answer, physicists believe, lies in how the quarks interact via the exchange of gluons, massless particles that hold the quarks together via nature’s strongest force, and interactions among the gluons themselves. To tease apart the features of this force, which gets stronger and stronger if you try to pull the subatomic quarks apart, physicists accelerate atomic nuclei (a.k.a. heavy ions) to near light speed, where the gluons become dominant, and then steer them into head-on collisions at particle accelerators like the Relativistic Heavy Ion Collider (RHIC) at Brookhaven and the Large Hadron Collider in Europe. These collisions recreate conditions that last existed early in the universe, before quarks joined up to form protons and neutrons. Studying the behavior of “free” quarks and gluons in this primordial quark-gluon plasma should help scientists better understand the strong force, and how it generates so much of the mass we see when the particles coalesce to form ordinary matter.

So, while visible matter accounts for a mere fraction of the total universe—just five percent, the rest being composed of dark matter and mysterious dark energy—it’s enough to keep physicists like Steinberg busy for a while!