On the Mark and Set for RHIC Run 13

Benefits Beyond the Collisions

Research at RHIC is a compelling, ongoing exploration of the fundamental properties of matter and the infant universe. By looking back to a time before protons and neutrons existed, we can study nature’s strongest force—which holds everything from those fundamental particles to stars, planets, and people together—and delve into mysteries such as why the stuff around us even exists and how the universe evolved.

The refrigeration system at the Relativistic Heavy Ion Collider (RHIC) is humming to life today, beginning cool-down of the magnets in the 2.4-mile-circumference accelerator ring at Brookhaven Lab. Temperatures inside the magnets will ultimately reach a frigid four degrees Kelvin (-452 degrees Fahrenheit) as Run 13 at RHIC gets under way. When collisions begin next week, scientists from Brookhaven and around the world will collect data from particles emerging from the particle smashups to try to solve one of the biggest mysteries of the basic building blocks of matter—the puzzle of the proton’s “missing” spin.

“Recent data from RHIC show for the first time that gluons carry some of the proton’s spin; we now want to find out whether the same is true for antiquarks. RHIC has the unique capability for doing this,” said Berndt Mueller, who was recently named the Associate Laboratory Director for Nuclear and Particle Physics.

Asked about the impact of the recent Nuclear Science Advisory Committee report on the upcoming RHIC run, Mueller said, “We are not letting ourselves get distracted from focusing on Run 13. We have important scientific objectives to reach in this run, and we intend to achieve them safely and as planned.”

Run 13 is scheduled to continue for 15 weeks, with funding provided by a continuing resolution set to expire in March. More time may be added, depending on how the next federal budget is resolved.

RHIC is the only particle collider operating in the United States, and the only collider in the world where scientists can collide polarized protons—bunches of 100 billion protons all spinning like gyroscopes with their axes aligned in a particular direction. Collisions between two beams of these polarized protons are key to the quest to understand the subatomic components that make up the proton—quarks and gluons—and how those pieces contribute to the proton’s overall spin. RHIC operators will spend most of Run 13 colliding these polarized protons at 255 billion electron volts (GeV) for proton spin research.

Budgets permitting, the operators will also spend a few weeks at the end of the run colliding gold ions at energies of about 15 GeV. These relatively low-energy heavy ion collisions will provide a set of data that should be useful in learning more about how ordinary matter changes to quark-gluon plasma—a phase change that may be similar to how water changes from a liquid to ice or steam under certain conditions.

Protons, Quarks and Gluons Spin—But the Numbers Don’t Add Up

The early thought that protons get their spin from their three constituent quarks was proved to be over simplistic many years ago when fixed target experiments revealed that these building blocks account for only about 30 percent of total spin. Scientists have been looking for the missing source of proton spin ever since.

“Protons’ quarks, antiquarks, gluons and other pieces all contribute fractions of the proton’s spin,” explained Jamie Dunlop, a deputy spokesperson for the STAR collaboration, one of the two experiments at RHIC. “If you add everything up, including the motion of the quarks, antiquarks, and gluons, they have to add up to the whole of the proton’s spin. But we don’t know what fraction is in the spin of the antiquarks and gluons, and in the internal motion of all these particles inside the proton.”

RHIC’s polarized proton collisions were the first to probe the gluons’ role. From these experiments it appears that gluons make a significant contribution, but still not enough to account for all the missing spin. So the search goes on.

“New detectors at both STAR and PHENIX give us the ability to track particles called W bosons that emerge from collisions,” Dunlop said. “These W bosons can be used as probes to quantify spin contributions from a proton’s antiquarks and from different ‘flavors’ of quarks.”

Teasing apart these subtle contributions is essential to help reveal the complexity that resides within one of the most seemingly simple objects on Earth, explained Dave Morrison, a co-spokesperson for the PHENIX collaboration at RHIC.

“Protons are the most simple of all stable states of QCD matter,” he said, referring to matter made of quarks and gluons whose interactions are described by a theory called quantum chromodynamics (QCD). “The equation for QCD can be written in one line, but it’s taken us 40 years of theory and experimentation to get to the point we’re at today,” he said.

“You, I, and the coffee we drink are all made of protons and the quarks and gluons inside them. QCD is not some distant thing that only happens far off in the cosmos. It just takes an amazingly complex machine like RHIC to enable us to see how these components work together.”

Tracking Particles at STAR and PHENIX

Using muon detectors contained inside the funnel-shaped sides of the PHENIX experiment, collaborators will study the production of W bosons and learn about how up and down quarks contribute to the spin of the proton.

During Run 13, the STAR collaboration will track W bosons with a forward GEM tracker that was tested during Run 12 and is now ready for serious use. GEM stands for gaseous electron multiplier. The state-of-the-art detector relies not on wires, but sheets of plastic film coated with copper with holes punched in it (like Gore-Tex) to amplify the path and charge of collision debris with accuracy of 100-150 microns—about the width of a hair.

Additionally, muon telescope detector trays at STAR will look for lower-momentum muons produced from decays of other subatomic debris—upsilon and J/psi particles, which offer clues about collision conditions in the heart of STAR. And collaborators will also begin commissioning the Heavy Flavor Tracker, a $15 million major upgrade designed to track heavy quarks. 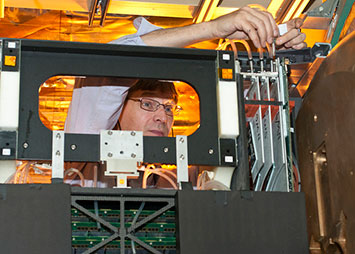 Meanwhile, the PHENIX collaboration will use silicon-based forward vertex detectors, tested during Run 12, to identify short-lived particles that are produced and decay within microns of the primary collision.  New electronics were recently installed along with these new detectors to help PHENIX rapidly select those rare collisions that contain muons. Some of these muons come from the decay of W bosons. Using the PHENIX muon detectors, contained inside the funnel-shaped sides of the experiment, collaborators will study the production of W bosons and learn about how up and down quarks contribute to the spin of the proton.

“The new detectors and electronics we tested last year should work extremely well in Run 13,” said Morrison. “The particle signatures we’re looking for are fairly rare, so we have to accumulate a lot of data to do the physics we want to do. With the improvements the Collider-Accelerator Department [C-AD] made last year, we have what we need to take data like crazy from every bit of beam sent our way.”

C-AD made a number of improvements to the RHIC accelerator complex during Run 12, some that led to a new world record and three world firsts. For Run 13, C-AD is again working toward superlative performance: high beam intensity with the most polarized protons crammed into the smallest area possible; high luminosity with the highest rate of particles colliding; and the highest degree of polarization as protons race around the RHIC ring.

“We have only about 12 weeks for collisions, so we must attain high luminosity as quickly as possible,” said C-AD Chair Thomas Roser. “We are always working at the edge of what’s really possible. If we’re not, we didn’t explore enough and need to push harder.” 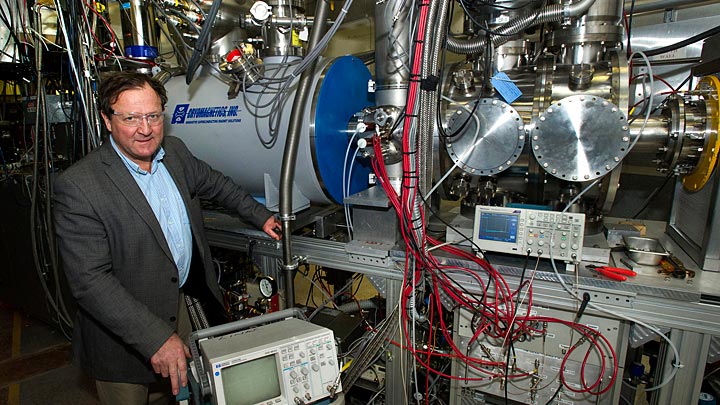 Anatoli Zelenski of Brookhaven's Collider-Accelerator Department and the new Optically Pumped Polarized Ion Source (OPPIS), which will pump up the production of polarized protons at RHIC for Run 13.

A new Optically Pumped Polarized Ion Source (OPPIS) will make its debut for Run 13. The OPPIS system uses a laser to polarize negatively charged electrons, which are then attached to protons to which their spin is transferred. The new OPPIS source will produce many more polarized protons than the old one. The new system—designed by Anatoli Zelenski and his team from C-AD and the Budker Institute of Nuclear Physics in Russia—took three years to develop and was only commissioned successfully in the weeks leading up to Run 13.

With uncertain federal budgets in the coming years, the future for research at RHIC is unclear. Run 13 is scheduled to begin this Monday, but people who operate RHIC and rely on the data it provides are already thinking about Run 14 and beyond.

Collisions will be put on hold every other Wednesday during the run for accelerator research and development, including testing new technologies such as electron lenses that mitigate the detrimental effects of beam-beam interactions.

“We work constantly to increase luminosity and polarization, so research and development will even continue during the run,” explained C-AD Accelerator Division Head Wolfram Fischer. “There are new, important questions to answer, not to mention records to set and break.”