Tenure appointments are made after a rigorous selection procedure culminating in a comprehensive review of each tenure case by the Brookhaven Council, an elected body that advises the Director on matters of concern to the scientific staff. The BSA Science & Technology Steering Committee oversees the tenure process and makes final recommendations to the BSA board. 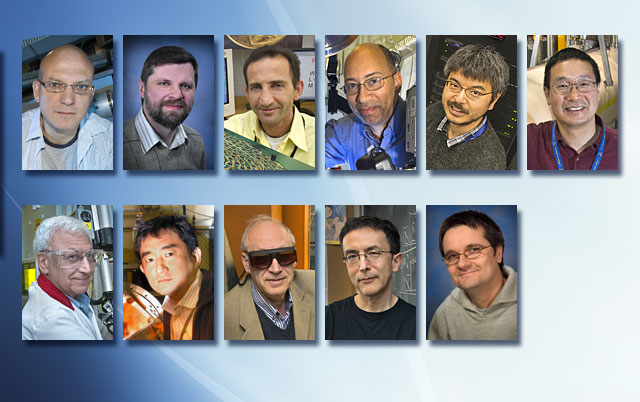 Darío Arena, a physicist in Brookhaven Lab's Photon Sciences Directorate, was awarded tenure for his achievements in the field of spin ordering and dynamics in condensed matter systems and complex magnets, and for his development of related scientific programs at the National Synchrotron Light Source (NSLS) and NSLS-II beamlines. More »

Michael Begel of the Physics Department was granted tenure based on his notable contributions to particle physics through the analysis of data from the ATLAS experiment, and his corresponding leadership in applying these data to tests of quantum chromodynamics (QCD) in high-energy collisions and the search for supersymmetry (SUSY) at the Large Hadron Collider (LHC). More »

Oleg Chubar, a physicist in the Photon Sciences Directorate, was awarded tenure based on his achievements in the field of synchrotron radiation science and technology, particularly in the area of synchrotron source calculations and wave optical simulations. More »

Gianluigi De Geronimo, an electrical engineer in Brookhaven Lab's Instrumentation Division, was awarded tenure for developing state-of-the-art microelectronics that have become transformational by enabling new concepts in detectors used by collaborators at the Lab, and in academia and industry. More »

Kenneth Evans-Lutterodt, a physicist in the Photon Sciences Directorate, was awarded tenure for his research and leadership in the field of x-ray physics, particularly in the development of novel x-ray optics and coherence measurements and applications. More »

Physicist Taku Izubuchi of Brookhaven Lab's Physics Department has been awarded tenure for his pioneering accomplishments and leadership contributions in computational approaches to the study of QCD—the theory that describes subatomic quarks, gluons, and their interactions inside protons, neutrons, and mesons. His "lattice gauge formulations," which break these complex physics problems into solvable pieces, have resulted in significant advances in theoretical calculations that enable fundamental measurements in particle physics. More »

Physicist Yun Luo of Brookhaven Lab's Collider-Accelerator Department was granted tenure for his contributions in designing, constructing, and operating complex user facilities, and his overall contributions to accelerator science. More »

Leonard Mausner of Brookhaven Lab's Collider-Accelerator Department was awarded tenure for his creative contributions to developing and producing medical radioisotopes. He was also recognized for his leadership in improving and overseeing operations for the Brookhaven Linac Isotope Producer facility and the associated Target Processing Laboratory. More »

Igor Pogorelsky, a physicist at Brookhaven Lab's Accelerator Test Facility (ATF), was awarded tenure for his significant achievements in accelerator science and his strong contribution to establishing the ATF as a leading U.S. user facility for advanced accelerator research and development. More »

Physicist George Redlinger of Brookhaven Lab's Nuclear and Particle Physics Directorate was awarded tenure for his significant contributions to particle physics, particularly through recent analysis of data from the LHC. Redlinger helps lead an international collaboration seeking SUSY—one of the most theoretically compelling extensions of the Standard Model—at the LHC's ATLAS experiment. More »

Jörg Schwender, a biochemist in the Lab's Biosciences Department, received tenure for his creative research to advance fundamental understandings of central carbon metabolism in plants—particularly for research on plant seed oil synthesis with integrated experimental and modeling approaches that involve isotope labeling, metabolic flux analysis, and computational modeling and simulation of metabolic networks. This research provides fundamental knowledge of biochemical processes that is important for developing and optimizing plants for renewable biofuels. More »