From selling goods and services to commercializing technologies

The U.S. Department of Energy’s Brookhaven National Laboratory values its many partners from the local community, across the nation, and around the world. These include vendors who supply goods and services to the Lab, users of Brookhaven’s scientific facilities, companies engaged in sponsored research with Brookhaven scientists, and entrepreneurs who have licensed our technologies for commercialization.

“One of the great things I found at Brookhaven is the willingness to look at really new things."

On Wednesday, May 7, the Lab will hold its first Small Business/Technology Commercialization & Partnerships business event from 8:30 a.m. to 3 p.m. in Berkner Hall. The free event will give attendees the opportunity to interact with Brookhaven staff working in its partnership areas and to tour some of the Lab’s world-class facilities. Breakout sessions will be dedicated to procurement, becoming a facility user, doing sponsored research at the Lab, and licensing and commercialization of Brookhaven Lab inventions.

Brookhaven Lab has nearly 9,000 vendors—two thirds of them small businesses—that provide goods and services to help advance our scientific mission. Michael Montenes, owner of M.S. Hi-Tech, an electronic component distribution company based in Hauppauge, NY, is one vendor who will be attending the workshop. He has been doing business with the Lab for the past 20 years, and was named the Small Business Administration’s 2013 subcontractor of the year for the Atlantic region after being nominated for the honor by Brookhaven Lab.

“We have been selling the Lab everything from electronics to test equipment to shovels and refrigerators and heaters,” he said. “We offer a lot of different services to the Lab, like a free recycling program. We don’t charge for shipping, we have a van dedicated to the Lab that goes out there probably three times a week,” he added.

Montenes said the Lab is among his top customers, along with 3M, Samsung and Honeywell.

“I guess you could say that we have positioned ourselves in such a way that doing business with the Lab is not difficult at all,” he said. 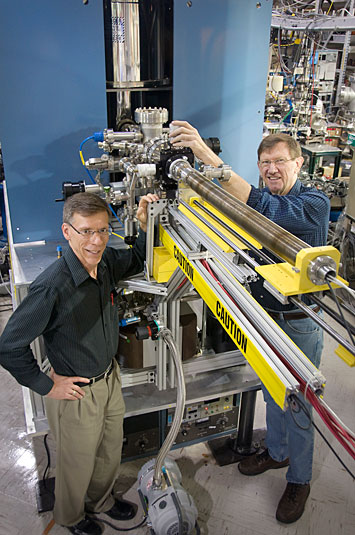 Raymond Browning (right) and Dan Fischer show off the prototype of the Vector Potential Photoelectron Microscope.

Every year, Brookhaven Lab welcomes thousands of scientists from other research Labs, academia, and industry to pursue their research at our world-class facilities, including the National Synchrotron Light Source (NSLS) and the Center for Functional Nanomaterials (CFN). Raymond Browning, a physicist with R. Browning Consultants, has been successfully partnering with the Lab since 2008.

With funding from the National Institute of Standards and Technology (NIST), Browning invented and has been developing a new class of x-ray photoelectron spectroscopic microscope, a device that opens up new experimental possibilities for advanced research on a wide range of technologically important materials systems.

“Seven years ago, I answered a Request For Proposals from NIST for an electron microscope,” he said. “I had come up with a concept and some theoretical demonstrations, but in order to make the microscope a reality, I had to come to Brookhaven from California, where I had been based, to actually make the microscope here. I’m discovering that it takes a long time to go from a theory to a product,” he said.

“One of the great things I found at Brookhaven is the willingness to look at really new things. When I first came here, I just had a theory, a piece of paper. And I was given the facilities to build the microscope here and also use of beamline U4A at NSLS to run the prototype and test it. It’s proved to be extremely successful.

“In the next stage, eventually working at NSLS-II [a new light source at Brookhaven that will begin experiments later this year], I’ll be able to make a microscope that one could commercialize.  Everyone I’ve worked with at Brookhaven has been extremely helpful.  I couldn’t have done it without them.”

Another way that businesses partner with Brookhaven Lab is through sponsored research.  Donald Brown, president of Slant/Fin Corporation, which specializes in high-efficiency boilers and baseboard heating, has a 15-year partnership with Brookhaven researcher Tom Butcher. The two have worked together on projects for the New York State Energy Research and Development Authority (NYSERDA).

“I became aware of the Lab’s work in heating technologies when Dr. Butcher developed the so-called blue flame oil burner,” Brown said. “Some time later there was an opportunity to do some work on a NYSERDA project involving the development of a high-efficiency home heating boiler. Slant/Fin filed an application and developed a project that became combined with testing the corrosion properties of various boiler materials. We collaborated with Brookhaven on a study of materials: stainless steel and aluminum and different kinds of coatings, including plastic and epoxy coatings, and different base metals that could be used for construction of boilers of this type.”

More recently, Butcher became involved in another NYSERDA project to explore the feasibility of applying a forced-flow air supply for common baseboard radiators. Slant/Fin, the largest manufacturer of baseboard radiators in the country, is a partner on the project.

“Slant/Fin is really interested in helping define the next generation of equipment of this type,” Butcher said. “Our goal is to do the basic modeling to see if we can do it, and to see what the impact can be on the low temperature output. Once we get past the proof-of-concept stage, this would lead to a more significant development project, and ultimately, collaboration or support for commercialization by Slant/Fin and others.”

Brown said, “That’s a project that relates precisely to our industry and we’re very eager participants in it. It has been a very helpful collaboration that combines our field experience and knowledge of practical applications in the marketplace with the theoretical testing and scientific resources of the Lab." 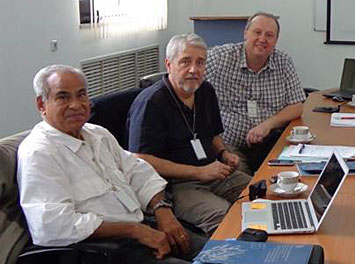 Other Lab partners help advance Lab discoveries to new levels of use and potential commercialization. For the past decade, Gilbert Gonzales of Clear Vascular has been working with Brookhaven’s Suresh Srivastava in the development of a dual-purpose radionuclide, tin-117m. This radioactive form of tin can be used to both image and treat cancer and many other diseases that respond to radionuclide therapy, such as heart disease and rheumatological conditions.

“Suresh had taken [this element] far in its development as a cancer treatment, but I recognized that it had applications for other areas because of its unique properties,” Gonzales said. “The problem was that it was being made in miniscule amounts at Oak Ridge National Laboratory in Tennessee, and in larger amounts in a nuclear reactor in Russia, and the specific activity was very low.”

To make the material more available and increase its strength, Gonzales put together a collaborative group including Brookhaven Lab that made use of an Initiative for Proliferation Prevention CRADA. This agreement enabled the team to work in Russia to transfer the technology from a nuclear reactor to a linear accelerator and to dramatically increase the tin compound’s specific activity, making it usable for biological systems.

“With the help of Brookhaven, we were able to create new intellectual property and transfer the project to a University of Washington cyclotron,” he said. “We now have our own material, our own facility and we make the material very inexpensively and at its theoretical limits of specific activity.”

Gonzales and his partners have formed three companies and are about to form more: Clear Vascular has just concluded phase two clinical imaging trials of humans, and will be starting therapeutic treatment of heart disease. A start-up company using tin-117m for rheumatology conditions will be starting clinical trials later this year, and another company is planned in the neurological field as tin-117m has unique properties that may be used for the treatment of Alzheimer’s disease.

“Working with Brookhaven, we’ve been able to collaborate with private companies, public companies, universities, national labs in other countries, other national labs in this country, and with clinical facilities and nuclear facilities all over the world,” Gonzales said.  “Brookhaven National Lab’s help has been critical. If it wasn’t for BNL none of this would have happened.”

For more information about the workshop or to register, please contact Christine Scaffidi at (631) 344-4238 or www.bnl.gov/doingbusiness/.