Our world faces unprecedented challenges and increasing demands for energy solutions. As the leader of the Theory and Computation Group at Brookhaven Lab’s Center for Functional Nanomaterials (CFN), theorist Mark Hybertsen and members of his group are researching new strategies that will help us meet those demands while reducing negative impacts to our environment.

“The CFN has three primary research themes — catalysis, electronic nanomaterials, and biomimetic processes for self-assembly,” said Hybertsen.  “The research done by my team aligns perfectly with these themes, which will all have important impacts on a spectrum of technologies, particularly energy strategies— impacts that will help improve our everyday life.”

Hybertsen and his team develop and apply complex calculations probing for answers on exactly how atoms are organized to form complex materials and the new properties of those materials.  For example, figuring out how different molecules interact with a nanometer scale metal cluster and how this changes a chemical reaction is an essential part of understanding how a catalyst works.   “Our calculations uniquely show the atomic-scale picture of the complex reactions probed by our experimental colleagues,” Hybertsen said. 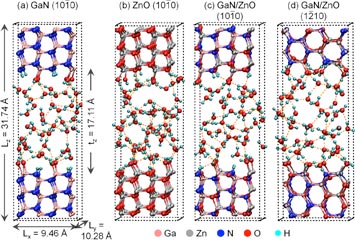 These images show the first principle molecular dynamics simulations of the water interface for four different semiconductors—crucial to understanding the catalytic activity involved in water-splitting reactions. These results show different amounts of spontaneous water dissociation at the interface (look for intact H2O versus OH and H bonded to cation and anion sites at the interface). Future studies will investigate reaction pathways in these promising GaN/ZnO alloys. From Kharche, Hybertsen, and Muckerman, Phys. Chem. Chem. Phys., DOI: 10.1039/c4cp00486h (2014).

In addition to their internal research at CFN, his team also assists outside research groups who pursue their own nanoscience research questions. Often it takes thousands of complex calculations to get answers to the many questions Hybertsen, his team and external user groups are asking.  Hybertsen noted that “at any given time, there are about 40 active, external projects that use our high performance computing facilities or collaborate with our team.”

Graphene, the one-atom-thick hexagonal network of carbon atoms, has great promise for electronics applications—but only with well-ordered edges at the nanoscale. Scanning tunneling microscopy revealed these triangular and hexagonal islands of graphene on a cobalt surface (grown by the Heinz and Flynn groups from Columbia University). Prezzi, from the Nanoscience Institute in Modena Italy, and visitor to Columbia, collaborated with Hybertsen through the CFN user program to investigate the edge structures using first principles quantum mechanical calculations. Her results clearly show that two edge structures have similar formation energy: a zigzag edge that is well known (red square) and an unexpected edge structure with low coordinated carbon atoms (green square). From Prezzi, et al., ACS Nano, DOI: 10.1021/nn500583a (2014).

Looking ahead, in the field of catalysis for example, the CFN is currently partnering with the catalysis group in the Chemistry Department and the National Synchrotron Light Source II on research projects that will push the envelope on the handling of large amounts of data.  “This type of great synergy is only available at a national lab,” Hybertsen said. “But this new scale will be a real challenge.  Brookhaven allows us to tackle this with many capabilities all under one roof.  I hope to see the continued expansion of computational capabilities to support innovative discoveries.”

Prior to joining Brookhaven Lab in 2006, Hybertsen was a senior research scientist at Columbia University.  From 1986 to 2002, he worked at Bell Laboratories. He has authored and co-authored more than 140 scientific papers. He resides in Bayport with his family and says he enjoys living in close proximity to the Great South Bay.