Nanotechnology PubSci Explores the Huge Impacts of the Ultra Small

Ever marveled at the elegant amber of a perfectly poured pint? Now imagine being able to see the precise chemistry behind the beverage, the invisible world of molecular interactions that give rise to the flavor. In that nanoscale landscape, where every billionth of a meter can make a difference, materials can begin to behave very strangely.

That level of detail may be overkill at a brewery, but such insight is crucial to revolutionizing everything from lithium-ion batteries to targeted pharmaceuticals. On May 29, 2014, a crowd gathered at Patchogue’s Hoptron Brewtique to learn about this staggering science of the very, very small—all over a few drinks. 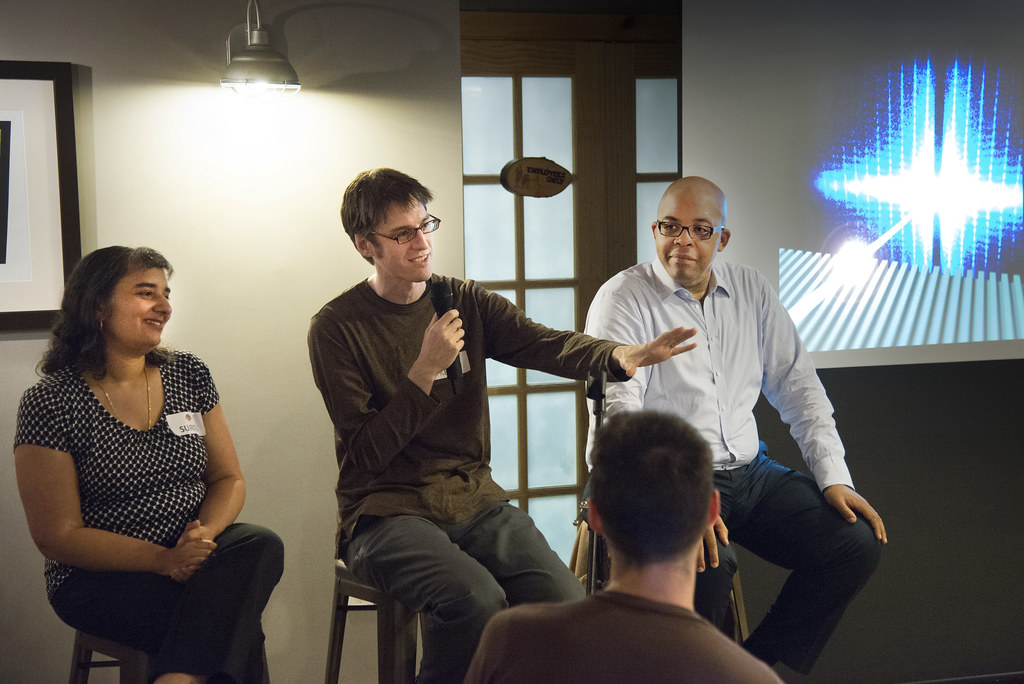 In Brookhaven’s second PubSci, three scientists from Brookhaven Lab’s Center for Functional Nanomaterials (CFN) led the audience in a conversation about the frontiers of nanotechnology and the state-of-the-art instruments involved in their work. Topics included DNA-guided self-assembly, atomically tailored catalysts, and x-ray maps of never-before-seen materials.

The three panelists—James Dickerson, assistant director of the CFN; Kevin Yager, a specialist in nanomaterial self-assembly and x-ray characterization; and Surita Bhatia, a joint appointment with Stony Brook University who studies soft materials and fluids—shared stories of discovery and revealed the surprising ways nanotechnology permeates all areas of science.

The crowd offered up many questions about the intricacies of nanotechnology and also invited the scientists to share anecdotes about their greatest personal and professional nano-driven moments.

Brookhaven Lab’s next PubSci event, Illumination, will focus on how powerful beams of light expose the inner secrets of the atomic world. Stay tuned for information on the date and location of future events.