Michael Creutz of Brookhaven Lab's Physics Department, who was named Senior Scientist Emeritus upon retiring in January 2014 and will be honored for his career and accomplishments during CreutzFest on Sept. 4 and 5

Michael Creutz of Brookhaven Lab's Physics Department, who was named Senior Scientist Emeritus upon retiring in January 2014 for his noteworthy contributions to the Laboratory's reputation as a world-class scientific institution, will be honored for his career and accomplishments during CreutzFest on Sept. 4 and 5. With emeritus status, Creutz retains many of the rights, privileges, and obligations of active employees and is expected to engage in continued research, activities beneficial to the Laboratory, and mentoring junior staff members.

"Early in his career at a time when theoretical physicists used pencils and paper, Mike became an early, heavy computer user. As he figured out how to implement lattice quantum chromodynamics, he started an entire 'industry.'"

The CreutzFest celebration will feature talks from nearly 40 of Creutz's colleagues, including those from Brookhaven Lab and other Department of Energy national laboratories as well as universities and other institutions around the world. It will be held in the Physics Seminar Room (Bldg. 510), and an agenda plus additional information is available on the CreutzFest website.

"Mike has been a towering figure who has contributed to the Lab's intellectual heft and helped create a thriving environment for important advancements and collaborations," said Physics Department Chair Laurence Littenberg.

Among his many accomplishments, Creutz first demonstrated that properties of quantum chromodynamics (QCD), the theory of "strong" interactions between subatomic quarks and gluons, could be studied numerically on a four-dimensional lattice through computer-based calculations.

With "Monte Carlo" methods—a technique that uses randomly generated numbers—and powerful supercomputers to perform calculations, Creutz provided strong numerical evidence to confirm that quarks cannot be isolated, previously an unproven property of QCD. He found that the force between widely separated quarks, which is equal to 14 tons, did not decrease as the quarks moved farther apart. Creutz's findings were published in the journal Physical Review in 1980. His paper became among the most cited from that year.

In the letter granting his emeritus status, Creutz was noted for his creative research in theoretical particle physics, numerical simulations of quantum field theory, and computational physics, as well as inspiring generations of lattice gauge theorists.

"Early in his career at a time when theoretical physicists used pencils and paper, Mike became an early, heavy computer user. As he figured out how to implement lattice quantum chromodynamics, he started an entire 'industry,'" Littenberg added. "As the technique has been extended, it's become useful and relevant for many other physicists, myself included."

These computational methods have since been applied to numerous theoretical problems in physics, including those of the Relativistic Heavy Ion Collider (RHIC) at Brookhaven Lab. The methods may also be relevant for interpreting new physics findings at the Large Hadron Collider at CERN, the European Organization for Nuclear Research.

Frithjof Karsch was working toward his Ph.D. in Germany around the time Creutz's seminal paper published in 1980, and today, he leads the Nuclear Physics Lattice Gauge Theory Group for the Lab's Physics Department. The physicists in this group use the lattice QCD calculations Creutz first developed to predict and interpret results from low-temperature ions that transition to ultra-hot, ultra-dense quark-gluon plasma during particle collisions at RHIC.

"Mike was the person who showed that large-scale computing could be used to calculate strong-interaction physics," said Karsch. "Decades ago, he was really the founder of a new approach. This year, more than 500 physicists attended the 32nd annual lattice symposium Brookhaven and Columbia University hosted—their work is rooted in Mike's."

As physicists improve control for both the size and accuracy of the lattice, thanks to powerful new supercomputers at the Lab, Creutz is currently continuing analytical work on the lattice for particles called neutrinos. This is challenging because, unlike other particles, neutrinos spin in one direction while the lattice most naturally incorporates two spin states. 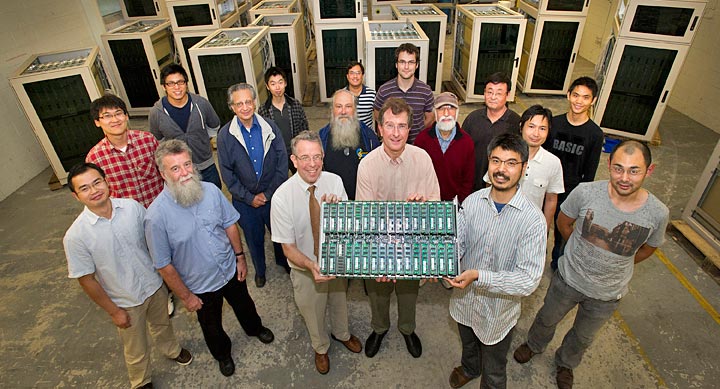 Michael Creutz (middle row, third from left) with colleagues from Columbia University, the RIKEN BNL Research Center, and Brookhaven Lab in 2011, when a supercomputer for lattice quantum chromodynamics (QCD) calculations was retired before being replaced with a more powerful supercomputer, called "QCD with Chiral Quarks" or "QCDCQ."

"One of the most positive things for me at the Lab is being to able to work on what I want to work on," said Creutz. "Now that I've retired and still have my badge, I'lI continue doing what I've been doing—I just get to come to the office a little later."

The same year Creutz arrived in the Lab's Physics Department, his wife Carol joined the Chemistry Department. She served as chair of Chemistry—the first woman chair in the Lab's history—from 1995 to 2000. The Lab awarded her emeritus status in 2012, before her death in 2013.

Creutz is a Fellow of the American Physical Society (APS), an adjunct professor at the C.N. Yang Institute for Theoretical Physics at Stony Brook University, and has served on a number of national committees, including the High Energy Physics Advisory Panel, Executive Committee of the Division of Particles and Fields for the APS, the U.S. Lattice QCD Executive Committee, and as elected chair of the APS's Division of Computational Physics. He has also served on the editorial board for several journals and was recognized with a number prestigious awards, including the Brookhaven Research & Development Award in 1991, Andrew Sobczk Memorial Lectureship from Clemson University in 1997, APS’ Aneesur Rahman Prize for Computational Physics in 2000, Gian Carlo Wick Gold Medal Award from the World Federation of Scientists in 2008, and Humboldt Research Award from the Humboldt Foundation in 2009.