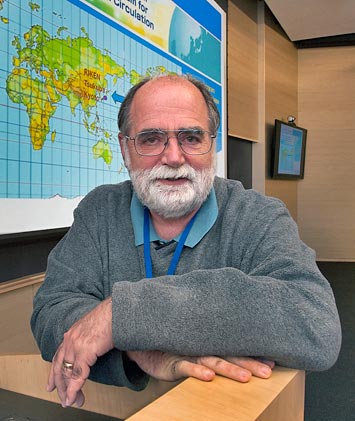 With mathematical models, and some very good company both young and old, Larry McLerran's decades-long quest to make sense of the laws governing the Universe's most basic building blocks of matter has taken him from the United States' West Coast to its East, and even as far as the Hunan province in central China. McLerran earned a Ph.D. in physics nearly forty years ago and today he's a senior scientist at the Department of Energy's Brookhaven National Laboratory (BNL) and Theory Group leader for the RIKEN BNL Research Center (RBRC). Now, the American Physical Society (APS) will recognize McLerran for his pursuits, when he is presented with the APS' Feshbach Prize for outstanding lifetime achievements in nuclear physics theory.

The APS will present McLerran with its Feshbach Prize during the annual APS meeting in Baltimore, Maryland, in April 2015. McLerran was chosen to receive this honor "for his pioneering study of quantum chromodynamics at high energy density and laying the theoretical foundations of experimental ultrarelativistic heavy ion collisions. His work has been a crucial guide to experiments at the Relativistic Heavy Ion Collider (RHIC) and the Large Hadron Collider, and he has mentored a generation of young theorists."

"Over the years, I've worked with computers, pencils, chalk, and—most importantly—talented colleagues to figure out why the Universe behaves the way it does," McLerran said. "I'm honored that my colleagues in the American Physical Society are recognizing me with this Feshbach Prize."

"From tiny, short-lived subatomic particles to mysterious dark energy, the matter of our Universe forms beautiful, complex systems with many simple patterns and rules we understand very little about. There are great opportunities for discovery."

As a theoretical physicist, McLerran uses—and develops—complex mathematical models to figure out and explain why the Universe works the way it does. In particular, he probes the Universe within the scope of the theory of quantum chromodynamics, which describes the "strong" interactions among subatomic quarks and gluons that are naturally confined in protons and neutrons.

In the early '80s, McLerran and his colleague Ben Svetitsky of Tel Aviv University in Israel used computers that were powerful at the time and massive quantities of randomly generated numbers to do the first Monte Carlo simulation for high-temperature quantum chromodynamics. Together, they found a transition when those naturally confined quarks and gluons become free, no longer held captive by the strong force in the larger protons and neutrons. McLerran was among the first to propose that quark-gluon plasma—a blend of unbound quarks and gluons—could be produced by colliding heavy ions with high energies. Experimentalists later confirmed this at the Relativistic Heavy Ion Collider at Brookhaven Lab, where they produced quark-gluon plasma from colliding gold ions, yet they were surprised to learn quark-gluon plasma was a free-flowing liquid, not a gas as most theorists predicted.

Many of McLerran's more recent contributions and achievements resulted from collaborations with his colleagues in the Physics Department's Nuclear Theory Group—which aims to understand the fundamental structure of matter—and RBRC, a research center at Brookhaven Lab funded primarily by the Japanese RIKEN Laboratory for researchers to develop theoretical and computational physics, and to analyze data produced from particle collisions at RHIC.

"Since coming to Brookhaven, Larry has helped build one of the best nuclear theory groups in the world. And as theory group leader for the RIKEN BNL Research Center, he has inspired and mentored a generation of outstanding nuclear theorists in the U.S. and abroad," Nuclear Theory Group Leader Raju Venugopalan said. "In my view, Larry's outsized creative achievements and tremendous impact make him a guaranteed 'slam-dunk' case for a lifetime achievement award like this APS Feshbach Prize."

Venugopalan and McLerran invented the idea of a kind of matter called "color glass condensate" that controls the limits of quantum chromodynamics at high energies. McLerran and Rob Pisarski of the Nuclear Theory Group and RBRC invented the concept of "quarkyonic matter," which has properties of both free quarks and other confined particles called mesons and baryons. And with the Nuclear Theory Group's Dmitri Kharzeev and postdoc Harmen Warringa, McLerran made a seminal contribution to a theory called the "chiral magnetic effect."

McLerran also worked with Alex Kovner of the University of Connecticut and Heribert Weigert at the University of Cape Town in South Africa to invent the theory for yet another new form of matter, called "glasma," which makes the transition between the color glass condensate and quark-gluon plasma in collisions among strongly interacting particles. Today, McLerran is focused on determining the properties of glasma.

"From tiny, short-lived subatomic particles to mysterious dark energy, the matter of our Universe forms beautiful, complex systems with many simple patterns and rules we understand very little about. There are great opportunities for discovery," said McLerran.

McLerran earned a Ph.D. in physics from the University of Washington in 1975. He worked as a research associate at the Massachusetts Institute of Technology from 1975 to 1978, and then at Stanford Linear Accelerator Center from 1978 until 1980. From 1980 to 1984, he was an assistant and associate professor at the University of Washington, and from 1984 to 1989 a scientist at Fermi National Accelerator Laboratory. He taught as a professor at the University of Minnesota from 1988 to 2000, while also serving as a member and director of its Theoretical Physics Institute.

In 1999, McLerran arrived at Brookhaven Lab as a senior scientist and led the Nuclear Theory Group until 2004. He took on his current role as the Theory Group Leader for the RIKEN BNL Research Center in 2003.

McLerran has received a number of awards during his career, including a Brookhaven Science and Technology Award in FY2007—one of the Laboratory’s most distinguished prizes awarded for the exceptional nature of an employee’s contributions as well as the level of difficulty and benefit for Brookhaven.

McLerran is a fellow of the American Physical Society and a foreign member of the Finnish Academy of Arts and Sciences. He was an Alexander Sloan Foundation Fellow; awarded the Alexander Humboldt prize in 1988; received the Hans Jensen prize at the University of Heidelberg in 2009, where he is a Jensen Professor of Theoretical Physics; and granted an honorary Ph.D. from Central China Normal University in 2011. He is currently the university's Liu Lian Shou Professor of Theoretical Physics.