Dedicating Brookhaven Lab's Brightest Beacon at the Frontiers of Discovery

From the floor to the rafters, the world's most advanced synchrotron light source was filled with hundreds of people—including U.S. Department of Energy (DOE) Secretary Ernest Moniz, U.S. Senator Chuck Schumer, U.S. Representatives Lee Zeldin and Kathleen Rice, and a number of other distinguished guests—who gathered as Secretary Moniz dedicated the National Synchrotron Light Source II (NSLS-II) at Brookhaven Lab on Feb. 6.

Hundreds of people, including a number of distinguished guests, gathered with U.S. Department of Energy Secretary Ernest Moniz as he dedicated the National Synchrotron Light Source II (a video of the ceremony is available on WBNL). The Secretary also met with Lab researchers on site and hosted an all-employee meeting.

NSLS-II is a $912-million DOE Office of Science User Facility that produces extremely bright beams of x-ray, ultraviolet, and infrared light. With x-rays 10,000 times brighter than its predecessor's, researchers at NSLS-II will examine a wide range of materials, including superconductors and catalysts, geological samples, and biological proteins to accelerate advances in energy, environmental science, and medicine.

"Now that it's completed, NSLS-II will pick up where NSLS left off," said Lab Director Doon Gibbs, who emceed the dedication and welcomed a number of special guests, including Deputy Under Secretary for Science and Energy and a former chair of NSLS Michael Knotek.

While discussing NSLS-II, Gibbs said, "It will have enormous impact in a broad range of fields, especially in energy science—which was one of the drivers for its creation in the first place—but more broadly in life sciences, condensed matter physics, material science, geology, medicine, engineering, and making a broad, broad impact in science generally. Beyond that, it will enable new techniques and create opportunities that we can't imagine today." 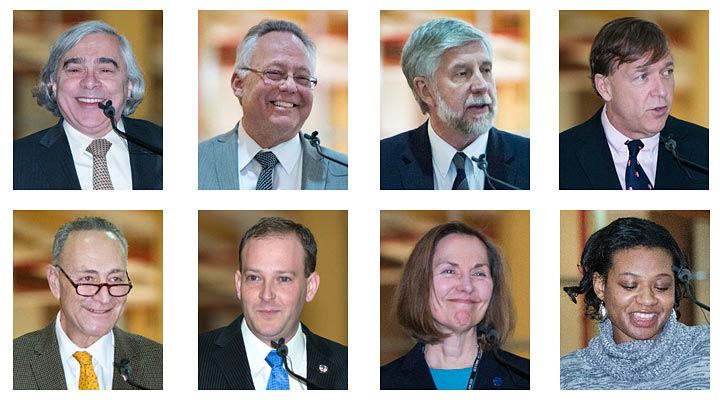 Gibbs also noted the support of DOE's Deputy Director for Science Programs for the Office of Science Pat Dehmer and Associate Director of Science for Basic Energy Sciences Harriet Kung in shepherding the NSLS-II project. He also thanked New York State Governor Andrew Cuomo and the state for a recently announced $65 million commitment to Brookhaven Lab, part of which will fund development of a new high-energy x-ray beamline at NSLS-II to enable researchers to map the three-dimensional structure of batteries and other energy-storage materials in real time and under actual operating conditions.

"This is an exciting day," Gibbs said in closing. "It's how laboratories like ours evolve and grow. This is the beginning of the next big thing."

NSLS-II Project Director Steve Dierker spoke next, explaining, "We got word from the Department of Energy in 2005 that we were awarded critical decision zero, the first step in beginning the design and construction of the facility. It was an exciting time, one full of promise. And now, we are poised to make good on that promise with discoveries in energy storage, superconductivity, protein crystallography, and what I think are of the most exciting types of research to come: those discoveries that we cannot even imagine today that will be made possible by this extraordinary facility."

Stony Brook University President and Brookhaven Science Associates Chair Samuel L. Stanley Jr., M.D. then discussed the importance of the partnership between Stony Brook and Brookhaven and the discoveries to come.

"This next-generation synchrotron is going to enable us to push the frontiers of photon science, both in basic and applied research," Stanley said before adding, "From Stony Brook University's perspective, we were the single largest outside user of NSLS-I and a significant part of our strategic plan in the physical sciences—including faculty hiring—is founded and predicated on the extraordinary capabilities of NSLS-II."

Support From the U.S. Senate & House of Representatives 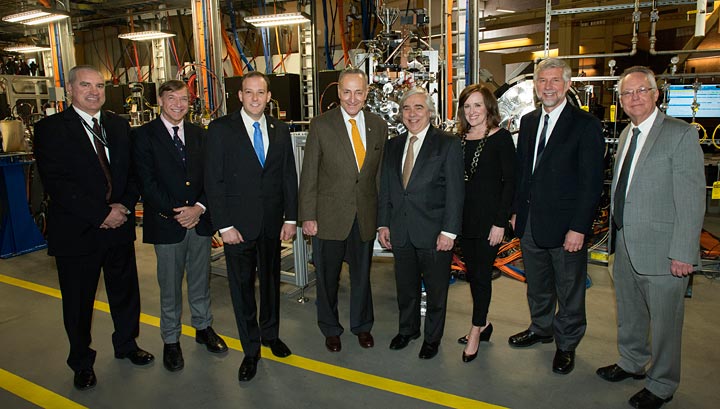 U.S. Senator Charles E. Schumer, who spoke next, talked about his support for Brookhaven Lab in the past and future while highlighting the importance of NSLS-II.

"Not only does this produce great science, it produces great jobs, and it is the future for Long Island," Schumer said.

Schumer also discussed the research at NSLS that enabled General Electric (GE) in its design of the Durathon battery, which can endure thousands of charge and discharge cycles and last up to 20 years. To bring this research to market for applications in telecommunications, utility-level energy storage, and transportation, GE built a new $170 million battery-production facility in Schenectady, New York, creating more than 300 jobs. GE is one of several U.S. industrial partners participating in building experimental stations at NSLS-II.

Next, U.S. Congressman Lee Zeldin said, "What has well over a decade of sweat equity resulted in a huge, almost-billion-dollar investment, which is going to make huge important strides for technology and science."

In addition, Zeldin noted three U.S. Representatives' support for the Lab: Chair of the House Committee on Science, Space, and Technology Lamar Smith; Congresswoman Rice; and former Congressman Tim Bishop, who supported the Laboratory during his six terms in office.

Unprecedented Capabilities for Research at NSLS-II 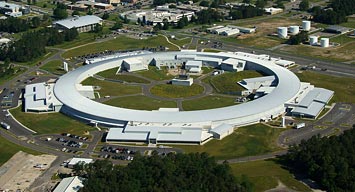 "Now we've moved into the realm of true in operando, where with a light source like NSLS-II, we can gain unprecedented resolution faster than ever to see what's happening in an actual working battery without modifying it," explained battery researcher Esther Takeuchi, who holds a joint appointment with Brookhaven Lab and Stony Brook University. "I believe that this really is going to lead to unprecedented insight, unprecedented ability to solve the challenges that can contribute to addressing the energy needs of the world."

Director and emcee Gibbs then introduced Melissa Sims, and Stony Brook University Ph.D. student who used the original NSLS and anticipates using NSLS-II to help understand more about meteorite impacts and how solar systems are formed.

"NSLS-II's super-bright x-ray beams are going to greatly enhance our ability to study those impacts and materials on incredibly fast timescales, from microseconds to seconds instead of hours," Sims said. 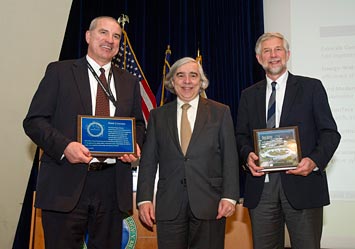 "These types of user facilities are just so essential for the entire American research enterprise, and so Brookhaven and our other national laboratories will continue to be a foundation for American science," said Secretary Moniz during the dedication ceremony.

"NSLS-II, an extremely fitting successor to NSLS: We expect no less from you over the next couple of decades, in science and in the whole influence of our scientific enterprise," Moniz added, before recognizing the project management that led to the facility being completed on budget—with increased scope—and significantly under schedule.

After the ceremony, Moniz visited NSLS-II, the STAR detector at the Relativistic Heavy Ion Collider (RHIC), and the Center for Functional Nanomaterials, and met briefly with Lab researchers during a whirlwind tour.

Before concluding his visit at Brookhaven Lab, Secretary Moniz hosted an all-employee meeting in Berkner Hall. He discussed DOE-related parts of President Obama’s fiscal year 2016 federal budget request to Congress, and stressed the importance of working safely, embracing diversity, and helping to develop that next generation of scientists—those who may be using NSLS-II in 2030 and beyond. He also recognized NSLS-II Project Director Steve Dierker and DOE Brookhaven Site Office Manager Frank Crescenzo for their leadership on the project, and he took questions from the audience.