On July 23, Laboratory Director Doon Gibbs traveled to Washington D.C. to attend the Ernest Orlando Lawrence Award reception where physicist Mei Bai—who made significant contributions to research at the Relativistic Heavy Ion Collider (RHIC)—received her award from Secretary of Energy Ernest Moniz. Bai was one of nine mid-career scientists and engineers honored this year with the Lawrence Award, which is one of the most prestigious given by the Department of Energy (DOE). 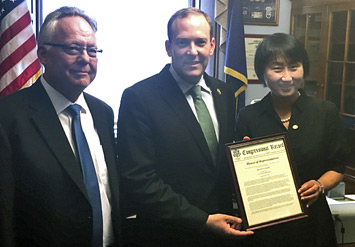 Bai, who is currently working in Germany at the Nuclear Physics Institute in Jülich, was honored for her outstanding contributions in advancing understanding of the spin of the proton and for her work on making RHIC the world's first and only high energy polarized proton collider. During her acceptance speech, Bai spoke fondly about her time at Brookhaven, noting the team effort needed to make RHIC a success. She also said she was particularly thankful for the mentoring she received during her career.

Prior to the ceremony, Bai was invited to Long Island Congressman Lee Zeldin’s office. Representative Zeldin welcomed Bai personally and presented her with a framed copy of a citation lauding her achievement that he had read into the Congressional Record.