Red, white, and blue boxes filled with chocolate, lollipops, gum, other tasty treats, and personal thank you notes from the students are on their way to U.S. troops overseas 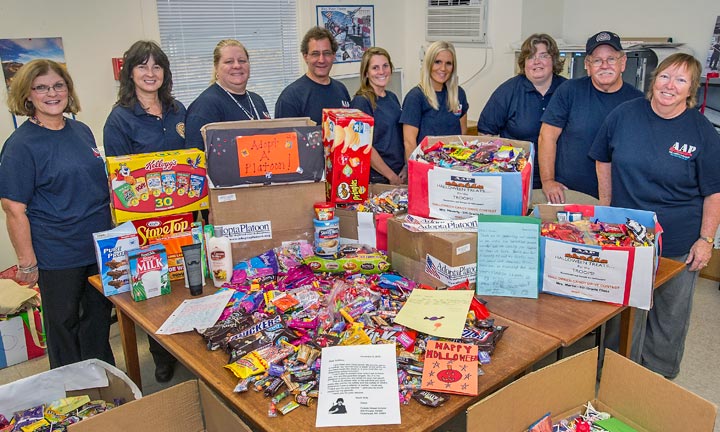 Students from Riverhead’s Pulaski Street Elementary School once again teamed up to help bring a little bit of hometown spirit to U.S. troops serving overseas. In a lively competition between 30 fifth and sixth grade classes, students collected nearly 1,100 pounds of candy for their second annual Halloween candy drive.  In addition to personal candy donations, a local pharmacy graciously donated more than 300 pounds of candy to the drive.  Last year, the students contributed 684 pounds of goodies, surpassing that number this year by 416 pounds! The goodies have already been sent to U.S. troops by Brookhaven Lab’s AdoptaPlatoon (AaP), a sub-committee of the Brookhaven Veterans Association.

“The kids are very excited to do this for our troops,” said Maryellen Braunreuther, who works in the Human Resources and Occupational Medicine Directorate and coordinates the candy drive. “I imagine that for the troops it must be wonderful to get packages from home, especially when it’s 1,100 pounds of candy!” said Braunreuther with a big smile. 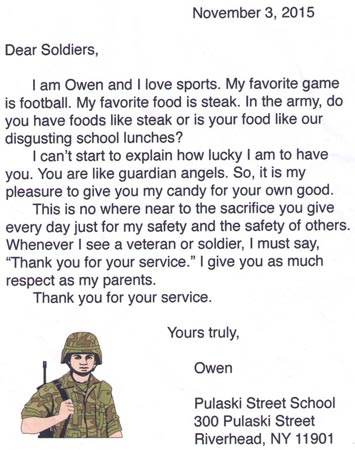 Notes like this were written by Pulaski Street Elementary School students and included in the boxes of goodies that the Lab's AdoptaPlatoon committee shipped off to U.S. troops deployed overseas.

“The Pulaski School students certainly surpassed all of our expectations,” added Bob Duffin, a Lab retiree and coordinator of the Lab’s AaP program.  “We thank the school administrators, teachers, and all of the students for their enthusiasm and hard work. Of course, I thank every Lab AaP volunteer for their dedication which makes this event such a success. I am sure the red, white, and blue decorated boxes and personal notes from the students to the troops thanking them for their service to our nation will bring a smile to the faces of the entire platoon.”

The students will celebrate their accomplishment with a pizza party. “It’s the least we can do to recognize their efforts,” added Duffin. “I applaud their sense of patriotism.”