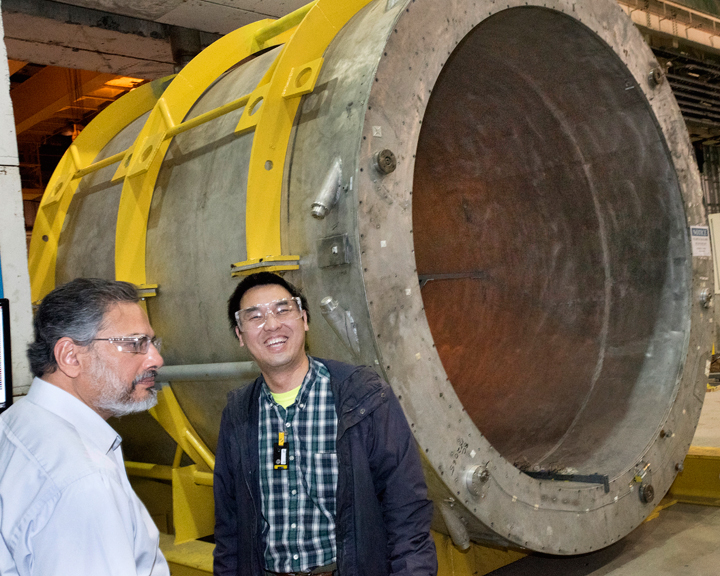 A team of physicists and engineers at the U.S. Department of Energy’s Brookhaven National Laboratory has just completed preliminary tests of a 20-ton cylindrical magnet that could form the heart of an upgraded particle detector at the Relativistic Heavy Ion Collider (RHIC). The goal was to see if the superconducting solenoid was in working order after having sat idle for 8 years, and then traveling cross-country from California to Brookhaven last year. LINK TO SPHENIX STORY

The magnet, formerly part of the BaBar experiment at SLAC National Accelerator Laboratory, could find new life in bending the trajectories of charged particles emerging from proton and ion collisions at RHIC, a DOE Office of Science User Facility for nuclear physics research. Scientists hope to use the magnet’s powerful magnetic field to tease out subtle details about how the building blocks of matter interact.

The main body of the magnet remains the same but everything around it has been made modern.

“The magnetic field bends charged particles so we can measure their momentum and differentiate among particles with very small differences,” said Brookhaven physicist Kin Yip, who led the Collider-Accelerator Department’s (CAD) involvement in the tests. Tracking those particles would help physicists discern differences among their “parent” particles—for example, heavy particles called upsilons, which come in three types whose masses vary by only a few percent. The scientists would use information conveyed by the behavior of the different-sized upsilons to probe the matter created in the particle collisions.

But before the magnet can be incorporated into a detector to make these precision measurements, staff in the Superconducting Magnet Division, Physics Department, and CAD need to be sure it will work.

Unlike the simple magnets you stick on your refrigerator, a superconducting solenoid is a complex electromagnetic machine in which a powerful magnetic field is generated by running electricity through coils of superconducting wire. These wires are made of a material that can carry electrical current with no energy loss, but to operate they must be chilled to 4 degrees Kelvin, or -452 degrees Fahrenheit—just about as cold as anything can get. So there are pipes with valves and joints that make up a cryogenic system for circulating super-cold liquid helium to cool the superconducting coils, and external power supplies to deliver the field-generating current. 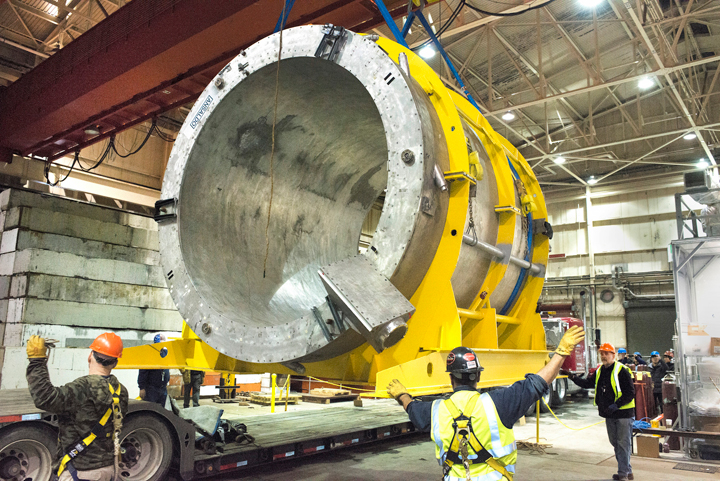 The 20-ton solenoid arrives at Brookhaven Lab last year after a cross-country journey from SLAC in California.

“The BaBar solenoid is a world-class magnet and we were really fortunate to be able to acquire it,” said Brookhaven physicist Dave Morrison, co-spokesperson for the sPHENIX scientific collaboration that hopes to incorporate it into a transformation of RHIC’s existing PHENIX detector into one with brand new state-of-the-art capabilities.

But the BaBar magnet was built in the 1990s, tested in 1997-98, and operated at SLAC from 1999-2008. “So after bringing it to Brookhaven from SLAC last year, we needed to inspect the coils, to make sure they were not broken, and look for leaks in the cryo system,” Yip said.

The team already knew about one leak, which the BaBar experiment had lived with, and they found another smaller leak during these inspections. They were able to fix both of these. “There was also one other set of even smaller leaks inside that we didn’t have to fix because they’re unlikely to cause any problems,” Yip said. 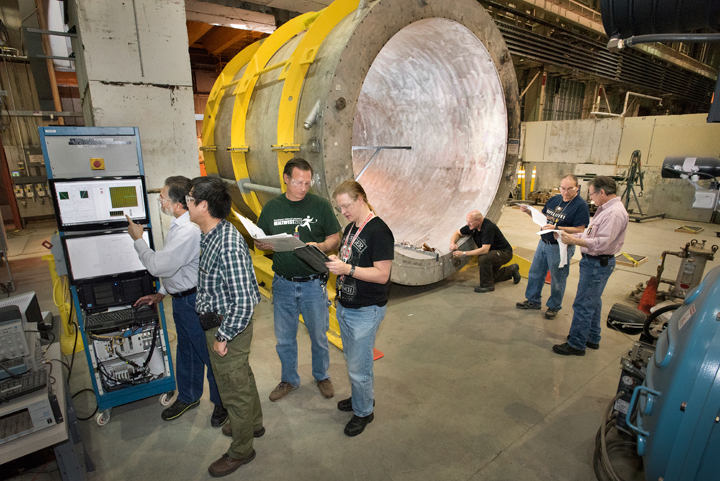 Meanwhile, magnet engineer Piyush Joshi adapted a “quench-detection” system he’d developed for magnets at the Large Hadron Collider in Europe. This system senses potentially damaging changes in the conductivity of the cables in the magnet—and automatically cuts the power and drains the magnet’s energy before a transition back to a resistive state can cause damage.

“A quench is what happens when the magnet loses superconductivity—because of a change in temperature, a loss of the vacuum, or a shift in the magnet,” Joshi explained. “When that happens, it becomes a normal magnet, with resistance, which produces heat. The cables are very small and cannot take that much energy at room temperature,” he said.

Joshi developed a special algorithm that can detect very small differences in voltage between the outer and inner coils of the magnet. “That difference should be close to zero. If it is above a certain threshold, it indicates a quench,” said Joshi—and sets off a series of steps to extract the energy from the magnet quickly. A switch stops power from going into the magnet, shuts off the power supply, and the current gets rerouted into a “dump resistor,” which absorbs the energy—“like the runaway ramps built beside a steep highway to stop a truck that’s lost its brakes,” Joshi said.

The key is to make the system sensitive enough to detect a real problem, but not noisy electrical spikes from external interference, which can be caused by something as mundane as a nearby cell phone.

“The new algorithm detects the quench and the quench only, and no noise,” Joshi said.

The team also upgraded the magnet’s power supply and some of the other controls. “The main body of the magnet remains the same but everything around it has been made modern,” Joshi said.

The next step was to cool the magnet—a process that takes three weeks—and turn up the power.

For the first test, they ran current through the magnet, first at 1 ampere, then 10, 50, and finally 100 amps (most houses run on around 100-200 amps). Measurements revealed that the magnetic field ramped up proportional to the current with a balance between the inner and outer coils. 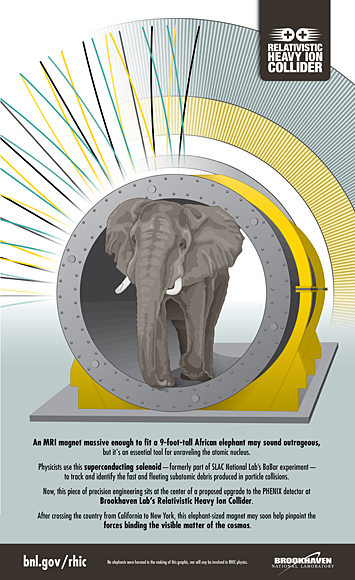 “The magnetic field was scaling up with the current just the way we expected,” Yip said. “We made it go up and down and up and down repeatedly, to be sure everything was working, and we also tested the quenching trigger system by setting a threshold to manually shut the magnet off.”

“These first tests indicate that what started out as a top-notch superconducting research magnet is now as good as new,” Morrison said.

Eventually the magnet will need to operate at 4,600 amps, producing a field of 1.4 Tesla. “That’s a strong magnetic field, which would spread out all over the building without a way to contain it,” Yip said.

So the next step is to surround the magnet with large pieces of steel that will act as a “flux return” to guide the field back toward the magnet rather than letting it spread through the open air. The team will use large pieces of steel (recycled from the multipurpose spectrometer magnet formerly used in an experiment at the Alternating Gradient Synchrotron) to construct this flux return.

“We will have to cut the steel and shape it to make it fit,” Yip said, but by reusing materials they can keep the cost down.

“By strategically reusing resources and equipment we are effectively trying to put a high-quality, high-value experiment in the RHIC tunnel for a fraction of what it would cost to build a whole new detector from the bottom up,” said Brookhaven physicist Edward O’Brien, sPHENIX Project Director.

With the steel plates in place, the team hopes to repeat the magnet tests at higher current sometime this fall.

sPHENIX R&D is supported by the DOE Office of Science and also by Brookhaven Lab’s Laboratory Directed Research and Development program, BNL Program Development, and in-kind contributions from collaborating universities.