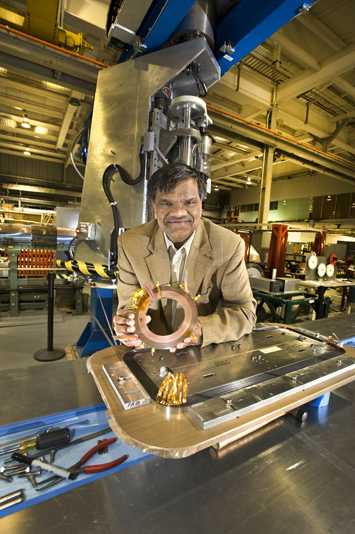 Ramesh Gupta, a physicist in Brookhaven Lab’s Superconducting Magnet Division, has been granted tenure for his significant contributions to designing, constructing, and operating complex user facilities, as well as his performance of original research and contributions to knowledge.

“Ramesh is considered a leader in the world of superconducting magnets, which are essential to great modern accelerators such as the Relativistic Heavy Ion Collider (RHIC) at Brookhaven and the Large Hadron Collider at CERN in Switzerland,” said Superconducting Magnet Division Head Peter Wanderer. “His contributions to the design of magnets are key to the continued success of experiments at RHIC.”

For more than a decade, Lab researchers have been exploring the use of new materials that become superconducting at higher temperatures. Gupta, head of the High Temperature Superconductor (HTS) Research and Development Group, is a leader among those exploring avenues for HTS magnets that are energy efficient and have magnetic fields a million times stronger than Earth’s. These new magnets could revolutionize use in future accelerators and play a key role in energy efficiency and storage.

Gupta’s current interests include developing and demonstrating high field and HTS magnet designs and technologies for particle accelerators and other applications. He has developed several innovative designs such as the common-coil dipole and open midplane dipole for future high-energy circular colliders. He has also developed a cost-effective, rapid-turnaround and systematic magnet research and development approach that is now being used at various laboratories around the world.

Gupta joined Brookhaven Lab in 1984 and has made key contributions to the design of RHIC main ring dipoles, quadrupoles and interaction region magnets. He earned his M.Sc. and Ph.D. in physics from the University of Rajasthan in India, with a thesis on improving the design and analysis of superconducting magnets for particle accelerators. He also holds an M.S. in accelerator physics from the University of Manitoba in Canada.