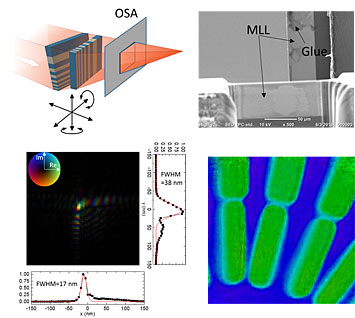 By bonding together two multilayer Laue lenses, researchers at Brookhaven National Laboratory's National Synchrotron Light Source II have significantly simplified the setup and alignment process that is required to use these lenses.

Multilayer Laue lenses (MLLs) are incredibly precise x-ray optics that can focus x-ray beams down to just a few nanometers in size. Grown in atom-thick layers, they have improved steadily over the years since their development in 2004, but have had limitations. A MLL focuses x-rays in one dimension only, meaning that two lenses – arranged 90 degrees to one another – are required to produce a point focus. This alignment process is aided by a dedicated MLL manipulator, but it’s a complex mechanical setup that makes it difficult to adapt MLLs to many existing microscopy systems.

By bonding together two multilayer Laue lenses (MLLs), researchers at Brookhaven National Laboratory’s National Synchrotron Light Source II (NSLS-II) have significantly simplified the setup and alignment process that is required to use these lenses.

This work will allow MLLs to be used in studies that require high-resolution x-ray imaging and scanning systems but were previously incompatible with the MLL setup. One such field is nanotechnology, where researchers seek to resolve material details down to as small as a few nanometers (nm, billionths of a meter) or less. This could foster a new wave of exciting scientific results.

Researchers report the first x-ray imaging experiment using two multilayer Laue lenses (MLLs) that were manually bonded together. As a result, the group significantly reduced the complexity of aligning the two lenses as well as the number of mechanical stages needed to position them, broadening the breadth of experiments that can take advantage of these advanced x-ray optics.

The group was able to properly control the angle and separation distance between the two MLLs, creating a single focusing optic with a common focal plane for a given energy of the x-ray beam. Bonding the two lenses was a challenge, largely because such a high degree of precision was required; the spacing between them, for example, must be exact down to the micron (millionth of a meter) level. To achieve this, the researchers developed a custom system that allowed them to monitor and control the lenses’ positions during the bonding process, utilizing a combination of sophisticated ultra-precise positioning devices and white-light interferometry, an extremely precise heights measurement technique. The study discussed here shows that their approach is able to yield bonded MLLs that can be successfully used in imaging experiments at NSLS-II’s Hard X-ray Nanoprobe (HXN) beamline. The researchers were able to use a scanning transmission x-ray microscope to create a test image with a resolution of 50 nm by 50 nm. By optimizing the image data with mathematical tools, they improved the resolution to 13 nm by 13 nm. With continued improvement, these bonded MLLs can become a very useful, widely applied nano-focusing optic for many types of x-ray microscopy systems designed for high-resolution x-ray imaging.

We acknowledge the assistance of D. Kuhne and M. Maklary in the preparation of the experiment. We also acknowledge R. Conley’s contribution on the growth of one of the MLLs used in the bonding. The experiment was performed at the beamline 3ID of the National Synchrotron Light Source II, a U.S. Department of Energy (DOE) Office of Science User Facility operated for the DOE Office of Science by Brookhaven National Laboratory under Contract No. DE-SC0012704. This research used resources at the Center for Functional Nanomaterials, which is a U.S. DOE Office of Science Facility, at Brookhaven National Laboratory under Contract No. DE-SC0012704.