Accelerating a Key Reaction in Fuel Cells and Batteries 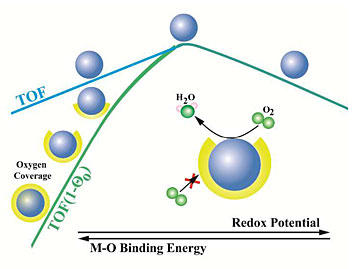 The turnover frequency (TOF) of oxygen-reduction reaction (ORR) catalysts was shown to be limited by the blockage of active sites by reaction intermediates for those catalysts that have low redox potentials.

The oxygen-reduction reaction is one of the most important and fundamental chemical reactions that takes place within energy conversion systems, such as fuel cells and certain battery types. During the reaction, which occurs at the fuel cell cathode (its positive terminal), the O2 molecule is cleaved in a multi-step process. The reaction is very sluggish on its own and thus is aided by catalysts, often metals or metal alloys. However, scientists still don’t have a full grasp on the limitations of these catalysts and, therefore, how to improve them. In this work, researchers pinpointed some of the factors that affect the catalysts’ performance, a first step toward determining how to improve them.

The oxygen-reduction reaction is necessary to the performance of fuel cells and some batteries. It is sped up by catalysts such as platinum, which is the most efficient of the metal element catalysts but is also expensive and not particularly abundant. Platinum alloys (with metals such as cobalt, nickel, and copper) and non-platinum catalysts have been used with success, even showing greater activity. A more efficient catalyst will improve the effectiveness and longevity of energy-storage devices, such as fuel cells, allowing for less or even zero platinum to be used.

Scientists gauged the performance of platinum (Pt) and non-Pt catalysts for the oxygen-reduction reaction (ORR) by taking electrochemical measurements and via x-ray absorption spectroscopy, which can return information on a sample’s chemical and electronic structures based on how the sample absorbs (or scatters) x-rays. The x-ray studies were done at the National Synchrotron Light Source II’s Inner-Shell Spectroscopy (ISS) beamline and at the Argonne National Laboratory’s Advanced Photon Source beamline 10-ID.

The research focused on the catalysts’ limitations as a result of two factors: first, the redox potential, a measure (in volts) of a catalyst’s tendency to gain electrons; second, the degree to whether the catalyst has blocked “active sites,” which are the atomic-scale regions on the catalyst surface where the reaction, or part of it, takes place. These sites can be blocked by reaction intermediates, which are compounds that are created partway through the multi-step reaction. In other words, molecules created during the reaction that the catalyst accelerates can partially inactivate that catalyst.