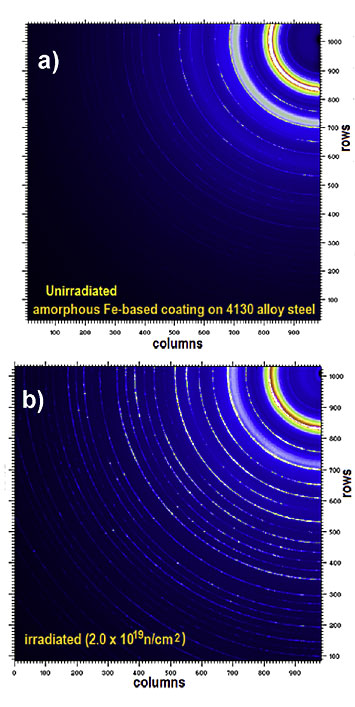 In the field of nuclear energy, high-tech steel materials are used to fabricate nuclear reactor components. To improve these materials further, researchers are considering ways to employ nanoscience, such as by coating the steel with materials that are “nanostructured,” meaning they have features with dimensions from a few to several hundred nanometers (billionths of a meter). In particular, researchers are focusing on protective coatings that are nanostructured but also amorphous, or lacking in long-range order. The idea is that the disordered arrangement of nanoscale features provides sites for radiation-induced defects to migrate and be contained.

In a study based on this approach, researchers subjected an amorphous nanostructured iron-alloy-coated steel sample to a flux of primarily fast neutrons as well as a high-temperature environment. The neutrons were produced via spallation – the process of breaking up nuclei due to bombardment, typically by a proton beam – at the Brookhaven Linac Isotope Producer (BLIP). The group observed a vast improvement to the sample’s resistance to corrosion and also noticed that the amorphous nanostructured coating enhances the ductility of the steel substrate, thus delaying the onset of embrittlement.

The ability to resist embrittlement (a big problem with nuclear materials) while simultaneously combating corrosion is a significant advance in the development of nuclear-grade steel materials. These steels are used to make components for nuclear reactors, such as shielding doors and piping, which are subjected to the harshest of conditions. Treatments and/or coatings that can prolong the stability and lifetime of nuclear steels would be of great benefit the nuclear technology industry.

Scientists were able to increase a steel sample’s resistance to corrosion and embrittlement due to neutron radiation by coating it with an amorphous, nanostructured iron-alloy. They tested the coating’s protective ability by placing the sample in the path of a neutron beam while also subjecting it to a variety of extreme conditions, including high temperatures, fluctuating radiation levels, and an oxidative/corrosive environment.

A post-irradiation examination to gauge the macroscopic results of the radiation exposure revealed that the coating had resisted corrosion and embrittlement exceptionally well, and was structurally stable throughout the test. These findings were backed up by x-ray diffraction studies on the sample, performed at National Synchrotron Light Source (NSLS) beamline X17-B1 and the National Synchrotron Light Source II’s X-ray Powder Diffraction (XPD) beamline. These studies revealed the different chemical and structural phases that the coating cycled through and confirmed that its structure remained amorphous even as the neutron dose was increased.