Uncovering Why Copper Improves a Battery's Cathode and Overall Performance 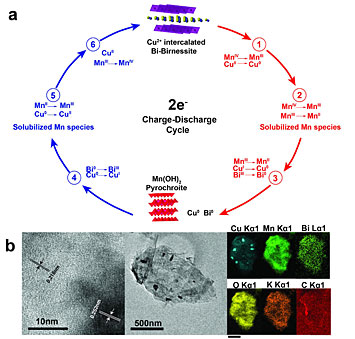 Researchers employed a high-resolution x-ray imaging technique to reveal how the slow incorporation of copper (Cu) into a battery’s cathode improves the battery’s longevity and rechargeability. They were studying a zinc/manganese dioxide (MnO2) battery with a cathode (positive terminal) consisting of layers of MnO2 and bismuth oxide.

Batteries with zinc (Zn) anodes and manganese dioxide (MnO2) cathodes are currently non-rechargeable, owing to irreversible changes in the MnO2 crystal structure during discharge. However, they have the potential for large-scale applications where rechargeability is necessary, such as batteries that store power generated by renewable energy sources and are then linked to the electrical grid. Such batteries must be cheap to manufacture, stable over several thousand charge-discharge cycles, and safe. They also must have high energy densities, which is key for minimizing their physical footprint (important for urban areas). Zn-MnO2 batteries could be the answer, but more development is needed to improve their performance. This work takes a step in that direction, revealing why the addition of positive copper ions (Cu2+) to the battery’s cathode, a layered structure modified with bismuth oxide, dramatically increases the battery’s lifetime and rechargeability.

Studies of Zn-MnO2 batteries have revealed that the battery’s MnO2 cathode, when modified with bismuth oxide and gradually “intercalated” with positive copper ions (the ions nestle between the cathode’s layers) will yield a battery that is not only rechargeable, but long-lasting. However, scientists have been unsure why this works.

This study answers some of those questions. Researchers report that the key to rechargeability lies in exploiting the “reduction potential” of copper – its tendency to acquire electrons and become more negatively charged, or “reduced” – which allows it to enter and exit the cathode’s layered structure during the chemical reactions that transfer charge between the battery’s two terminals. At different points during this multi-step process, the copper stabilizes and enhances the transfer.

Using various characterization techniques, the group learned that the copper ions, when inserted between the layers of the MnO2 cathode, reduce the cathode’s resistance to charge transfer. They also observed that the bismuth oxide in the cathode “partners” with manganese ions to prevent the formation of an unwanted and irreversible compound, haussmannite, a manganese-based mineral.

The researchers used two x-ray techniques to uncover additional details. Via x-ray fluorescence microscopy at National Synchrotron Light Source II (NSLS-II) using the Submicron Resolution X-ray Spectroscopy (SRX) beamline, they showed that during the start of the discharge process the copper atoms coordinated with the bismuth atoms. When the bismuth moved in the x-ray image, the copper moved with it. Then, toward the end of the discharge, the copper interacted with the manganese ions.

Another x-ray technique, micro x-ray absorption near-edge spectroscopy, also performed at NSLS-II beamline 5-ID, shed more light on the link between the manganese ions and bismuth oxide, revealing that it may take the form of sillenite, a mineral composed primarily of bismuth and oxygen. The presence of copper seems to aid this formation.

This work was supported by the US Department of Energy, ARPA-E under award number DE AR0000150. G.G.Y. would like to thank Jeff Secor from City College of New York for help with the Raman experiments. We would like to thank Yu-chen Karen Chen-Weigart from Brookhaven National Laboratory for assisting with the XANES measurements. This research used beamline 5-ID (SRX) of the National Synchrotron Light Source II, a US Department of Energy (DOE) Office of Science User Facility operated for the DOE Office of Science by Brookhaven National Laboratory under Contract No. DE-SC0012704.