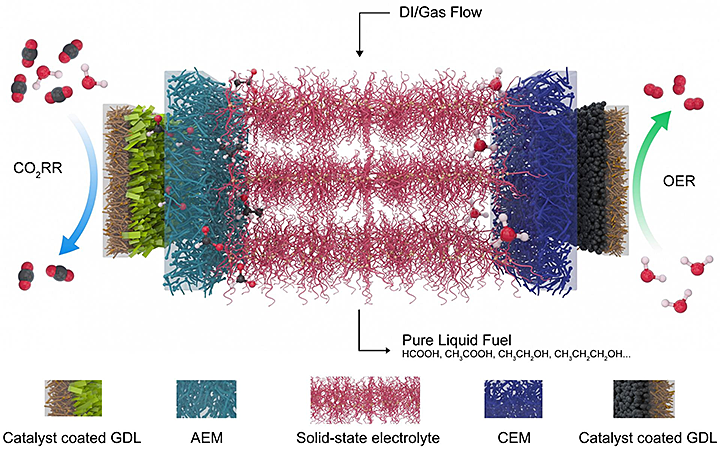 At the left is a catalyst that selects for carbon dioxide and reduces it to a negatively charged formate, which is pulled through a gas diffusion layer and the anion exchange membrane (AEM) into the central electrolyte. At the right, an oxygen evolution reaction catalyst generates positive protons from water and sends them through the cation exchange membrane. The ions recombine into formic acid or other products that are carried out of the system by deionized water and gas. (Credit: Rice University)

Scientists created and tested a new electrocatalyst that turns carbon dioxide into formic acid, which can be used directly as a liquid fuel in a fuel cell.

This work can help repurpose a common greenhouse gas in an efficient and environmentally friendly way with an electrolyzer that uses renewable electricity to produce pure liquid fuels.

In tests, the new electrocatalyst reached an energy conversion efficiency of about 48.5 percent. Two advances made the new device possible. The first was the development of a robust 2-D bismuth catalyst and the second was a solid-state electrolyte that eliminates the need for salt as part of the reaction.

The Rice lab worked with Brookhaven National Laboratory to view the process in progress by using x-ray absorption spectroscopy, a powerful technique available at the Inner-Shell Spectroscopy (ISS) beamline at Brookhaven Lab’s National Synchrotron Light Source II (NSLS-II). The technique enables scientists to probe the electronic structure of electrocatalysts in operando—that is, during the actual chemical process.

In this work, the team followed bismuth’s oxidation states at different potentials and were able to identify the catalyst’s active state during carbon dioxide reduction.

Carbon dioxide reduction is important for its effect on global warming, as well as for green chemical synthesis. Therefore, if electricity is generated by renewable sources like the sun or wind, scientists could create a loop that turns carbon dioxide into something important, without emitting more of it, by using a technology based on these advances.