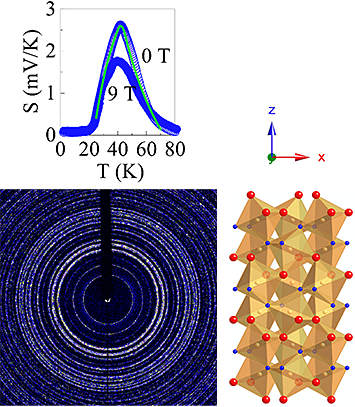 (Top) Thermopower of the material as a function of temperature at 9 Tesla and 0 Tesla field. (Bottom) The crystal structure of CoSbS (right), determined from Debye-Scherrer x-ray diffraction rings (left).

A very efficient and environmentally friendly energy conversion is to convert heat into electricity. While most powerplants primarily heat water to run turbines, not all the heat ends up in the water—some of it goes into the surrounding materials that enclose the water and the central core of the powerplant. By using thermoelectric materials, even some of this excess heat can be harnessed and transformed into electricity and be used to reduce greenhouse gas emissions.

In this study, a team of scientists investigated the low-temperature thermopower behavior in the transition metal CoSbS, which is made of cobalt (Co), antimony (Sb) and sulfur (S), and found that a single crystal sample from the material shows extremely high thermopower at cryogenic temperatures. The scientists explain this phenomenon through the material’s electron diffusion. This means that even higher efficiency could be obtained by nanofabrication, which is expected to primarily affect and reduce phonon thermal conductivity.

To study the materials and to confirm that thermopower rise is not caused by crystal structure changes at cryogenic temperatures, the scientists used power x-ray diffraction at the Pair Distribution Function (PDF) beamline at the National Synchrotron Light Source II (NSLS-II)—a DOE Office of Science User Facility at Brookhaven National Laboratory. Using the structural information about the material, the scientists were able to shed more light on the potential of the material. However, additional measurements and investigation will be necessary to fully understand the capabilities of this material.

Work at Brookhaven National Laboratory is supported by the U.S. Department of Energy’s Office of Basic Energy Sciences as part of the Computation Material Science Program. This research used the Pair Distribution Function (PDF) beamline 28-ID-1 of National Synchrotron Light Source II, which is a U.S. Department of Energy (DOE) Office of Science User Facility operated for the DOE Office of Science by Brookhaven National Laboratory under Contract No. DE-SC0012704.