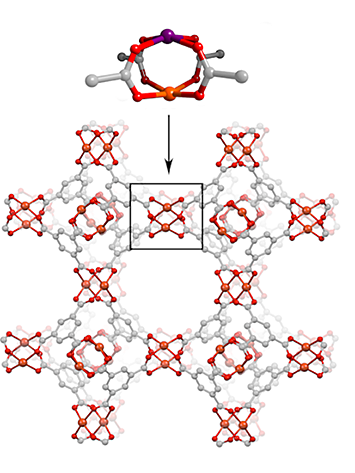 As the first study of gas phase catalytic activity occurring at the nodes of a metal-organic framework (MOF), this research opens the pathway for tailored active-site geometries in catalysts.

MOFs are widely used as a support structure for catalytic reactions. This study uses an MOF itself as a catalyst and allows for unprecedented control of catalyst geometry and active sites.

Metal-organic frameworks (MOFs) are a new class of materials with applications for gas storage, purification, and separation, as well catalysis and sensing. MOFs consist of metal ions or clusters coordinated to organic ligands to form one-, two-, or three-dimensional structures. The use of crystalline MOFs as heterogeneous catalysts in the liquid phase is well-known; however, gas phase catalytic activity at the metal nodes of an MOF has never been reported until now. In this study, a team of scientists demonstrated gas phase catalytic activity occurring at the MOF nodes. As potential catalysts, MOFs have the advantage of exceptionally high surface areas that provide a large number of active sites. Using the metallic nodes of the MOFs as catalytically active sites offers benefits such as a homogeneous distribution of metal sites within the framework and a well-defined geometric structure for the metal nodes, which can be fully characterized by crystallography and can be investigated theoretically to predict the possible mechanisms of catalytic transformations.

To fully understand catalysis on their bimetallic copper rhodium (CuRh) MOF, the scientists employed multiple characterization techniques, including x-ray absorption near edge structure (XANES) measurements at the Quick X-ray Absorption and Scattering (QAS) beamline at the National Synchrotron Light Source II (NSLS-II)—a U.S. Department of Energy (DOE) Office of Science User Facility located at DOE’s Brookhaven National Laboratory. Their combined studies demonstrated that the catalytically active sites were the Rh(II) ions and role of the Cu was to provide stability for the framework. The scientists also showed that the MOF was stable for 24 hours under reaction conditions, and density functional theory (DFT) calculations suggested a mechanism for selective catalytic hydrogenation.

This work provides fundamental understanding for the rational design of MOF catalysts, which exhibit the exceptionally high selectivity typically associated with homogeneous catalysts but are more stable under reaction conditions than their molecular analogs.

This research was supported by the U.S. Department of Energy, Office of Science, Office of Basic Energy Sciences, under Award DE-SC0019360. The University of South Carolina’s Advanced Support for Innovative Research Excellence program funded preliminary studies. The work carried out at Brookhaven National Laboratory was supported by the U.S. Department of Energy under contract no. DE-SC0012704. S.D.S. is partially supported by a U.S. Department of Energy Early Career Award. A.I.F and A.M.E were supported by the U.S. Army Research Laboratory and the U.S. Army Research Office under grant number W911NF-15-2-0107. This research used beamline 7-BM (QAS) of the National Synchrotron Light Source II, a U.S. DOE Office of Science User Facility operated for the DOE Office of Science by Brookhaven National Laboratory under Contract No. DESC0012704. Beamline operations were supported in part by the Synchrotron Catalysis Consortium (U.S. DOE, Office of Basic Energy Sciences, Grant No. DE-SC0012335).