A Nanomaterial's Journey Through a Tomato Plant

Scientists investigate how manufactured nanomaterials interact and travel through plants. 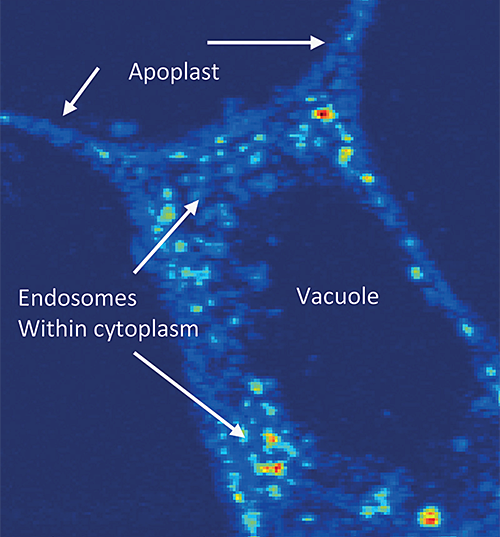 This 60 nm resolution image was taken from the stele of the root of a plant that was exposed to the nanomaterial. The brighter areas show the position of Ce within the apoplast and within endosomes. Image credit: Environ. Sci.: Nano 6, 273 (2019).

Scientists revealed how a manufactured nanomaterial (MNM) based on Ce travels through a tomato plant on a subcellular level.

This study will enhance scientists’ ability to predict how properties of MNM such as CeO2 MNM, which is used in rechargeable batteries, influence the uptake, transformations, and transfer of nanomaterials in terrestrial food webs.

To understand and identify the properties that dictate how MNM interact with plants is crucial for assessing ecological risks and developing agricultural applications for nanomaterials. Recently, various studies showed that surface chemistry of manufactured nanoparticles has a profound impact on their uptake and translocation in plants; however, there is a limited understanding of the tissue, cellular, and subcellular basis for this.

In this study, the scientists used a novel hard x-ray nanoprobe with unprecedented spatial resolution (<15 nm) to reveal details about the cellular basis for the effect of surface chemistry on nanoparticle uptake and translocation in plants. The team studied functionalized CeO2 MNM in tomato plants and visualized the mechanisms of entry into roots and translocation within plants using x-ray nano- and microprobes at the Hard X-ray Nanoprobe (HXN) beamline at the National Synchrotron Light Source II (NSLS-II) and GSECARS beamline 13-ID-E at Advanced Photon Source. Both are U.S. Department of Energy (DOE) Office of Science User Facilities located respectively at Brookhaven National Laboratory and Argonne National Laboratory.

The team found that plant growth and Ce concentration in tissues were functions of surface charge and that the translocation was much greater for negatively charged CeO2 than positive or neutral CeO2. CeO2 nanomaterials are used in rechargeable battery electrodes and as catalyst for diesel engines.

This information will greatly enhance our ability to predict how nanomaterial properties influence the uptake, transformations, and subsequent trophic transfer of nanomaterials in terrestrial food webs.

This material is based upon work supported by the National Science Foundation under Grants 1530594 and 1266252. This research also used the Hard X-ray Nanoprobe (HXN) beamline at 3-ID and the submicron resolution X-ray spectroscopy (SRX) Beamline at 5-ID National Synchrotron Light Source II, a U.S. Department of Energy (DOE) Office of Science User Facility operated for the DOE Office of Science by Brookhaven National Laboratory under Contract No. DE-SC0012704. Portions of this work were performed at GSECARS (The University of Chicago, Sector 13), Advanced Photon Source (APS), Argonne National Laboratory. GSECARS is supported by the National Science Foundation – Earth Sciences (EAR-1128799) and Department of Energy – Geosciences (DE-FG02- 92ER14244). APS facility is supported by DOE under Contract No. DE-AC02-06CH11357.