3D Nanoscale Imaging of Defects in a Nanowire 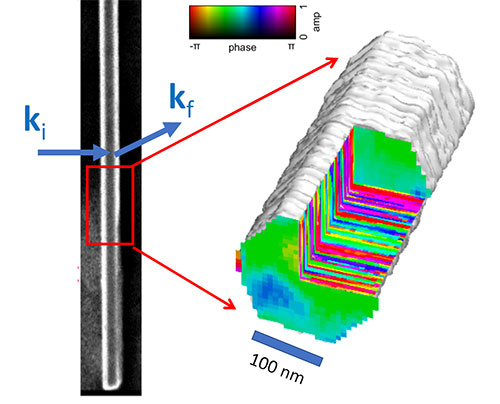 Multi-angle Bragg projection ptychography, in combination with coarse scanning measurements, enabled scientists to investigate the structure of a nanowire over three decades of length scale. The left side of the image shows an SEM scan of a nanowire with diffraction geometry, while the right shows cutouts from 3-D images sensitive to stacking defects. Image credit: Nano Letters 18(2),811-819 (2018)

In a single nanowire, the 3-D distribution of strain and stacking defects was measured using coherent x-rays, revealing structural heterogeneity from nano- to micrometer scales.

Structural features that determine the performance of advanced optoelectronic nanodevices can be imaged by a new coherent x-ray Bragg ptychography method suitable for studies in operando.

Scientists have made many advances in nanotechnology over the last decades, which could lead to a wide range of new technologies; however, to fully understand the potential of materials such as optoelectronic nanowires, scientists need to be able see the structure of the wires at the nanoscale.

The team of scientists analyzed nanodiffraction patterns to map lattice twists and bends across the entire nanowire length and imaged the 3-D strain at higher resolution in selected volumes via an adaptation of 3-D Bragg ptychography. This method images lattice variations by numerically inverting coherent diffraction intensity patterns.

Finally, by accessing a second Bragg peak, the scientists visualized stacking defects 3-D in the same nanowire with a resolution better than three nanometers. This image of stacking order in a nanowire is the first of its kind in the field of coherent diffraction imaging, representing a significant advance over prior work. Furthermore, this work addresses a critical gap in three-dimensional characterization of complex III-V nanowires that are a compelling route to a host of advanced electronic/opto-electronic applications.

Feature story: “Scientists Have a New Way to Gauge the Growth of Nanowires”

Development of maBPP phase retrieval and synchrotron measurements were supported by the U.S. Department of Energy (DOE), Office of Basic Energy Sciences (BES), Materials Science and Engineering Division. maBPP modeling, phase retrieval of experimental InGaAs data, and SEM characterization was supported by NSF DMR-1611341, acknowledged by L.J.L. and M.O.H. M.O.H. also acknowledges tuition and salary support of the NSF GRFP. V.C. and M.A. acknowledge funding from the European Research Council (ERC) under the European Union's Horizon H2020 research and innovation program grant agreement No 724881. M.V.H. acknowledges support from the Center for Nanoscale Materials, a U.S. Department of Energy Office of Science User Facility supported by the U.S. Department of Energy, Office of Science, under Contract No. DE-AC02-06CH11357.G.K. acknowledges financial support by the German Research Foundation (DFG), the Nanosystems Initiative Munich (NIM), and the Technical University of Munich, Institute for Advanced Study. This work made use of the EPIC facility of Northwestern University’s NUANCE Center, which has received support from the Soft and Hybrid Nanotechnology Experimental (SHyNE) Resource (NSF ECCS-1542205); the MRSEC program (NSF DMR-1121262) at the Materials Research Center; the International Institute for Nanotechnology (IIN); the Keck Foundation; and the State of Illinois, through the IIN. This research used the Hard X-ray Nanoprobe (HXN) Beamline at 3-ID of the National Synchrotron Light Source II, a U.S. Department of Energy (DOE) Office of Science User Facility operated for the DOE Office of Science by Brookhaven National Laboratory under Contract No. DE-SC0012704.