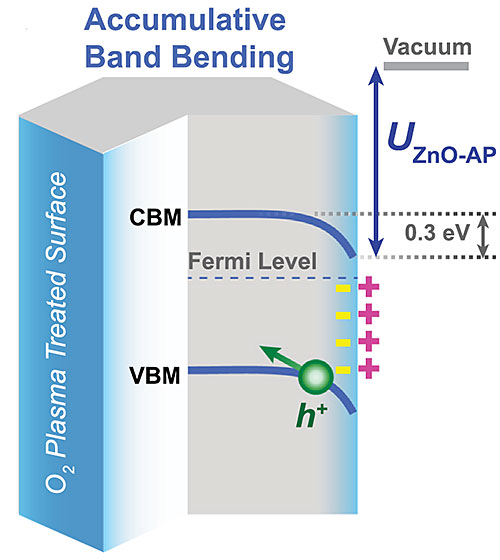 The study indicated that the plasma-treated surface of the nanowire creates 'a bend' on the Fermi level, which could be the cause of the higher efficiency. Image credit: Appl. Phys. Lett. 111, 231901, (2017)

Scientists revealed a surprising discovery: subtle imperfections on the surface of LED nanowires can dramatically increase their efficiency and ultraviolet light output.

This counterintuitive revelation may inspire new nanomaterial designs far beyond LEDs that would otherwise have been dismissed.

Light-emitting diodes (LEDs) traditionally demand atomic perfection to optimize efficiency. On the nanoscale, where structures span just billionths of a meter, defects should be avoided at all costs—until now.

A team of scientists discovered that subtle imperfections can dramatically increase the efficiency and ultraviolet (UV) light output of certain LED materials. The imperceptible flaws, which enhanced the performance, turned out to be missing oxygen in the surface of zinc oxide nanowires.

The scientists synthesized zinc oxide nanowires and used different treatments on them to determine the effect on the wires. These treatments were done at the Center for Functional Nanomaterials (CFN), a U.S. Department of Energy (DOE) Office of Science User Facility located at DOE’s Brookhaven National Laboratory. To further investigate the properties of these new imperfect nanowires, the researchers teamed up with the scientists from two beamlines at the National Synchrotron Light Source II (NSLS-II), another DOE Office of Science User Facility at Brookhaven Lab.

Using two x-ray characterization techniques – namely, x-ray absorption near edge structure (XANES) at the Inner-Shell Spectroscopy (ISS) beamline and x-ray photoemission electron microscopy (XPEEM) at the Electron Spectro-Microscopy (ESM) beamline – , the scientists were able to verify their findings and came to the conclusion that the improvement of nanowires’ band edge photoluminescence is not related to the removal of defects.

This revelation may inspire new nanomaterial designs far beyond LEDs that would otherwise have been reflexively dismissed.

This research used resources of the Center for Functional Nanomaterials, and beamlines in the National Synchrotron Light Source II, including beamline 8-ID ISS (Inner Shell Spectroscopy) and beamline 21-ID ESM (XPEEM/LEEM Spectro-Microscopy Endstation). All of these are DOE Office of Science User Facilities operated for the DOE Office of Science by Brookhaven National Laboratory under Contract No. DE-SC00122704.