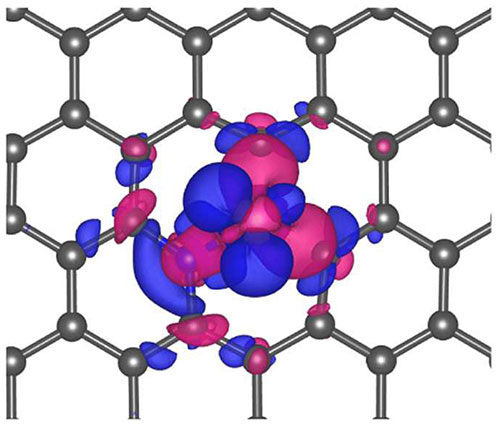 A single nickel (Ni) atom catalyst in the center of a graphene nanosheet (gray). The blue and magenta bubbles show the charge exchange in the reduction reaction to create CO. Image credit: Energy Environ. Sci., 11, 893-903 (2018)

This development opens more possibilities for efficient and cost-effective CO2 conversion than traditional electrocatalysts can offer.

Imagine if carbon dioxide (CO2) could easily be converted into usable energy. Every time you breathe or drive a motor vehicle, you would produce a key ingredient for generating fuels. Scientists have long sought a way to convert CO2 to CO, but traditional electrocatalysts cannot effectively initiate the reaction because a competing reaction, called the hydrogen evolution reaction (HER) or “water splitting,” takes precedence over the CO2 conversion reaction.

A few noble metals, such as gold and platinum, can avoid HER and convert CO2 to CO; however, these metals are relatively rare and too expensive to serve as cost-efficient catalysts.

In this work, to convert CO2 to CO in a cost-effective way, scientists used an entirely new form of catalyst. Instead of noble metal nanoparticles, they used single atoms of nickel. Nickel metal in bulk has rarely been selected as a promising candidate for converting CO2 to CO because it performs HER very well and brings down the CO2 reduction selectivity dramatically. Another reason is because its surface can be easily poisoned by CO molecules if any are produced.

To fully analyze the chemical complexity of the material and its behavior, the scientists used various complementary research techniques. Among these techniques, the researchers teamed up with the scientists from the Inner-Shell Spectroscopy (ISS) beamline at the National Synchrotron Light Source II (NSLS-II), a U.S. Department of Energy (DOE) Office of Science User Facility at DOE’s Brookhaven National Laboratory. The ultra-bright x-ray light at NSLS-II enabled the scientists to “see” a detailed view of the material’s inner structure.

Based on the results from the studies, the scientists discovered single nickel atoms catalyzed the CO2 conversion reaction with a maximal efficiency of 97 percent. The scientists say this is a major step toward recycling CO2 for usable energy and chemicals.

This work was supported by the Rowland Fellows Program at Rowland Institute, Harvard University. The collaboration acknowledges the support from the Global Climate and Energy Project (GCEP) at Stanford University. This work was performed in part at the Center for Nanoscale Systems (CNS), a member of the National Nanotechnology Infrastructure Network (NNIN), which is supported by the National Science Foundation under NSF award no. ECS-0335765. CNS is part of Harvard University. Part of the XAS experiments described in this paper were performed at the Canadian Light Source, which is supported by NSERC, the National Research Council Canada, the Canadian Institutes of Health Research, the Province of Saskatchewan, Western Economic Diversification Canada, and the University of Saskatchewan. Part of this research was performed at the Center for Functional Nanomaterials and the ISS beamline 8-ID at the National Synchrotron Light Source II, both of which are U.S. Department of Energy (DOE) Office of Science User Facilities operated for the DOE Office of Science by Brookhaven National Laboratory under Contract No. DE-SC0012704.