The 3.7-billion-year-old structures were considered the first evidence for life on the planet, however, new evidence suggests differently 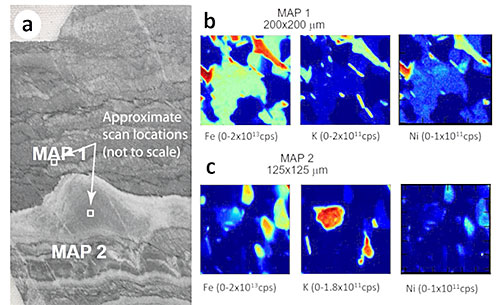 Image a) shows a photograph of the rock sample, while the collection of x-ray images b) and c), obtained at the SRX beamline, show element distributions within the indicated regions of image a). These chemical maps reveal fine-scale chemical and mineralogical variations that were not captured in previously published analyses, disproving the erroneous conclusions that were previously made about the role of biology in forming these rocks. Image courtesy of A. Allwood, Nature 563, 241 (2018)

Scientists re-examined early “fossils” and found the structures to be of geological, not biological, origin.

Finding evidence and dating the first beginnings of life on Earth has important implications for our understanding on how life emerged and evolved on Earth. This knowledge can also help scientists for the search of life on Mars or other planets.

Using the Submicron Resolution X-ray (SRX) beamline, they revealed crucial new evidence based on the elemental make-up of the rock structures. This evidence supported the conclusion that the rock formations are of non-biological origin.

Part of this research was carried out at the Jet Propulsion Laboratory, California Institute of Technology, under a contract with the National Aeronautics and Space Administration (NASA). Funding for the work was provided by the NASA Mars 2020 PIXL flight project. Additional funding was provided through the Stony Brook University-Brookhaven National Laboratory Seed Grant program. This research used the Submicron Resolution X-Ray Spectroscopy (SRX) Beamline 5-ID of the National Synchrotron Light Source II (NSLS-II), a U.S. Department of Energy (DOE) Office of Science User Facility operated for the DOE Office of Science by Brookhaven National Laboratory under Contract No. DE-SC0012704.