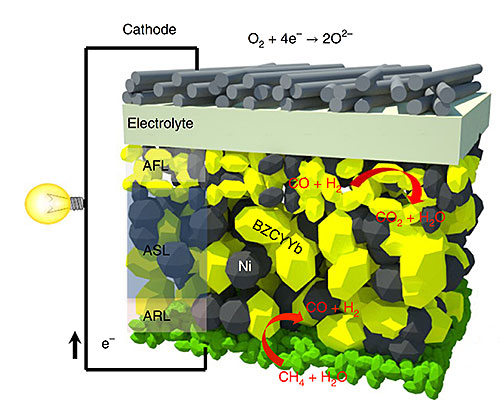 Structural design of a single cell from an intermediate-temperature fuel cell. The yellow and grey grains represent the different phases of the multifunctional anode. Image credit: Nature Energy 3, 1042–1050 (2018)

SOFCs have the potential to be remarkably flexible in terms of the fuels that they can use; but until now, direct use of methane at intermediate temperatures has been sluggish and inefficient.

Solid oxide fuel cells (SOFCs) are remarkably flexible in terms of the fuels that they can run on, offering the potential to directly convert hydrocarbons, coal gas, and other renewable fuels into electricity.

To be economically competitive and commercially viable, SOFC technologies require breakthroughs in materials development. While their commercial viability is greatest at operating temperatures of 300–500°C, it is extremely difficult to run SOFCs on methane at these temperatures, where oxygen reduction and C–H activation are notoriously sluggish.

In this study, scientists report a robust SOFC that enabled direct utilization of nearly dry methane (with about 3.5% H2O) at 500°C (achieving a peak power density of 0.37 W cm−2) with no evidence of coking after about 550 hours of operation. The newly designed cell consists of nanofiber-based cathode and a multifunctional anode coated with a so-called CRN catalyst for reforming of methane (CH4) to hydrogen (H2) and Carbon monoxide (CO).

The high activity and coking resistance of the CNR catalysts is attributed to a synergistic effect of cationic Ni and Ru sites anchored on the CNR surface, as confirmed by in situ/operando experiments and computations. The in situ/ operando experiments were performed at the Inner-Shell Spectroscopy (ISS) beamline at the National Synchrotron Light Source II (NSLS-II), a U.S. Department of Energy (DOE) Office of Science User Facility located at DOE’s Brookhaven National Laboratory.

The favorable features of this cell include simplicity (no need for reformer nor for water management), high efficiency, and low cost. In addition to being attractive for intermediate-temperature SOFCs, these features are also desirable in other types of energy storage and conversion systems, such as electrolysers for hydrogen production and membrane reactors for electro-synthesis of clean fuels or higher-value products.

This work was supported by the US Department of Energy Advanced Research Projects Agency-Energy (ARPA-E) REBELS program under award no. DE-AR0000502 and the SECA Core Technology Program under award no. DE-FE0031201. The in situ/operando studies, preparation and evaluation of catalysts and the instrumentation of AP-XPS were support by the Catalysis program, Office of Basic Energy Sciences, US Department of Energy, under grant no. DE-SC0014561, and the Division of Chemistry of the NSF under award no.1462121. A part of XAS studies were done at beam line 8-ID (ISS) of the National Synchrotron Light Source II, a US Department of Energy (DOE) Office of Science User Facility operated for the DOE Office of Science by Brookhaven National Laboratory, under Contract No. DE-SC0012704.