Chemists Prove the Existence of LiH in Battery 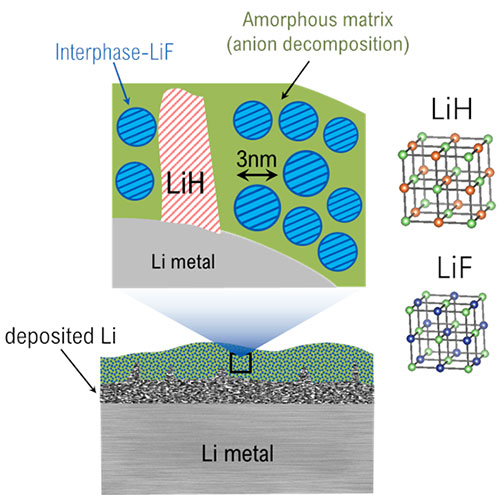 The schematic depicts the location within the solid-electrolyte interphase (SEI) where LiH and LiF can be found as well as the different crystalline structures of both. Image credit: Nature Nanotechnology 16, 549-544 (2021)

Batteries with lithium metal anodes offer a higher energy density but they are currently not rechargeable. This study identified key components of the SEI and resolved a controversial issue regarding the existence of LiH in the interphase, which influences the reaction mechanism.

In this study, scientists presented an essential step in making these batteries reversible by revealing critical new insights into the solid-electrolyte interphase (SEI). The SEI is a very thin solid material layer that forms on the battery’s electrode during the electrochemical reaction and is the key to reversibility. To study the thin SEI layer, the team of scientists turned to the X-ray Powder Diffraction (XPD) beamline at National Synchrotron Light Source II (NSLS-II). As a U.S. Department of Energy (DOE) Office of Science User Facility located at DOE’s Brookhaven National Laboratory, NSLS-II offers a wide range of x-ray scattering and spectroscopy tools, such as the XPD beamline.

Their detailed investigation of the SEI showed exciting results; LiH is identified and differentiated from LiF. The scientists used a technique called Rietveld refinement to characterize the crystalline structure, and thus could show the difference between LiH and LiF. Furthermore, they verified their findings through an air exposure experiment in which the researchers saw the expected decrease of LiH that is not stable in air compared to LiF. In addition, the team also identified the structural differences between LiF in the SEI and LiF in the bulk, with the former having unique properties that facilitate lithium-ion transport through the SEI. They also identified amorphous phases using pair distribution function analysis.

Researchers expect that the results of this study will provide much-needed practical guidance on lithium metal anodes, propelling research on this promising material forward.