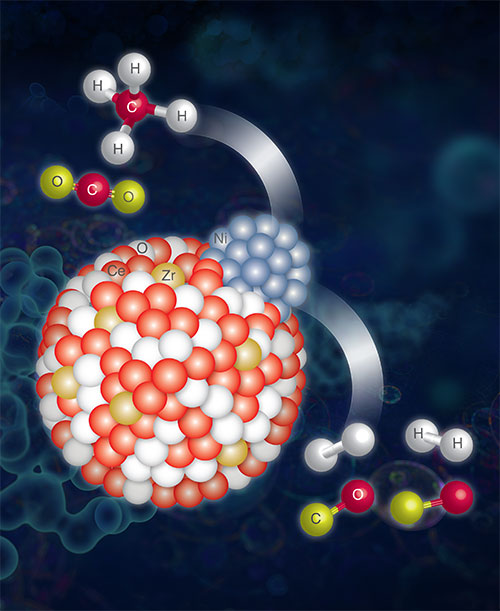 Converting greenhouse gases, such as CH4 and CO2, into useful intermediates or products offers green solutions for commercial fuel processing; this study revealed details about a mechanism to enhance catalytic performance.

Natural gas has transformed the fossil fuel market. It is primarily composed of methane, which is a potent greenhouse gas. At present, it is important to find efficient ways to enable sustainable use as an alternative to other fossil fuels, such as coal or petroleum. Therefore, researchers are searching for viable solutions for sustainable, commercial, natural gas processing, which should also be a practical solution to the irreversible and harmful impact of global greenhouse gas emissions.

In this work, researchers studied a catalyst composed of nickel-zirconia-ceria, which enhanced the dry reforming of the methane reaction (DRM: CH4 + CO2 -> 2CO + 2H2) that changes both CH4 and CO2 into useful intermediates, or products for further usage, instead of releasing those greenhouses into the atmosphere. Even though ceria, a viable catalyst for this reaction, is in its normal state it is not very cost-effective since activation and conversion need to be handled in different steps. To address this problem the scientists added zirconium (Zr) to the ceria structure to enhance the efficiency and selectivity of the catalysts and therefore, reduce the energy cost.

The researchers used various characterization techniques to understand the catalyst’s behavior during difficult DRM reaction conditions. These techniques included in situ x-ray studies at the Pair Distribution Function (PDF) beamline of the National Synchrotron Light Source II (NSLS-II) and beamlines 17BM and 21ID at the Advanced Photon Source (APS) and electron microscopy studies at the Center for Functional Nanomaterials (CFN). All three facilities are U.S. Department of Energy (DOE) Office of Science User Facility with both NSLS-II and CFN being located at DOE’s Brookhaven National Laboratory, while the APS is located at DOE’s Argonne National Laboratory.

Through these studies, the scientists found that by introducing Zr into the ceria catalyst, the catalytic performance, including conversion, reaction rate, and H2 selectivity, was significantly enhanced. They were able to reveal details about the reaction mechanism and showed that Zr prevented nickel migration to the surface of the catalyst and therefore, preserved the active surface area of the catalyst.

This study offers a more detailed understanding of catalytic reaction mechanism and a pathway to improve both CH4 and CO2 conversion.